Raptors are showing no sign of slowing down in second half of the season. 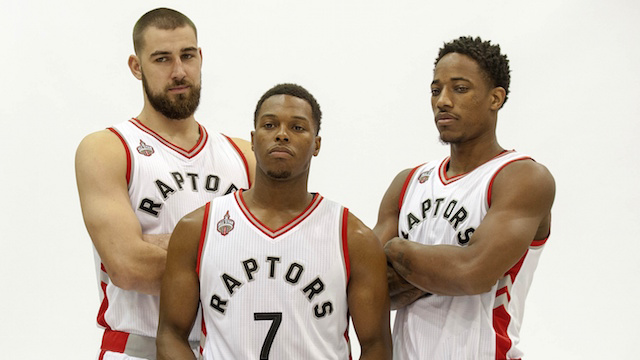 With a record of 42-10, the Toronto Raptors are sitting comfortably amongst the top echelon of the NBA. Just two games behind the Cleveland Cavaliers for first in the Eastern Conference, the Raps are well on their way for their best regular season in franchise history.

Under Dwane Casey, the team seems to be finally clicking and producing on all cylinders. With a top-10 net rating, the team is showing that they can not only be looked at for their trademarked defensive tenacity, but as a dangerous scoring threat as well even in the absence of their ‘three and D’ man, DeMarre Carroll.

So what’s going right for this impressive Raptors team and what still needs to be improved on?

Let’s begin with what Casey is known for – the defensive side of the floor. The Atlantic Division leaders are currently fifth in the league in points per game allowed (98.3) and are able to counter even the best of line-ups around the league.

If we rewind quickly to both of the Raptor games against the defending champion, Golden State Warriors, we have seen that the Raps had no issues competing against the Warriors smaller line-up, displaying an ability to clog driving lanes and getting out to shooters.

Looking at Casey’s most used line-ups, we can tell that the combination of Cory Joseph and Kyle Lowry in the backcourt, with Patrick Patterson, Terrence Ross and Bismack Biyombo rounding out the frontcourt is the Raptors top unit. Joseph is a gritty defender while Lowry, Patterson and Biyombo bring size and toughness. Combine that with the athleticism of a Ross and the Raptors are able to hang with any team in the NBA.

What Patterson has been lacking at times on the offensive side, primarily with his oft inconsistent three-point shooting, he makes up for it on the defensive end. Aside from Biyombo, quite possibly the most impressive defensive force this season has been Patterson, with his ability to box his man out of the paint and to negatively affect shots. In a league where stretch fours are more widely known to naturally, stretch the floor, and shoot threes, Patterson provides a defensive edge to his game too. 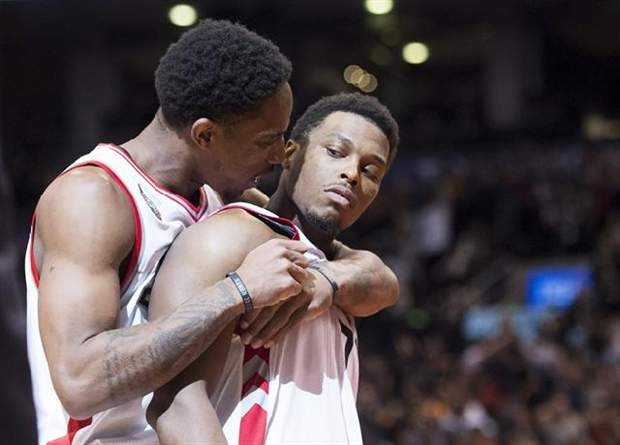 Offensively, the Toronto Raptors sit near the top as well. With a top-five offensive rating, the Raptors can attribute their scoring prowess to the third best scoring backcourt in the entire NBA. DeMar DeRozan continues to up his game to new heights, even introducing a more consistent three-point shot. His ability to draw contact and attack the basket easily ranks him amongst the league’s best two-guards. His backcourt mate isn’t too shabby either. Lowry is still the heart and soul of the Toronto Raptors franchise. Look no further than his stellar performance against the Cleveland Cavaliers from a few games back. The dude can ball and can lead a team through adversity – a sign of a star ready for the playoff spotlight.

Apart from the backcourt, the Raptors actually hold the third best three-point percentage in the entire NBA (trailing the Spurs and obviously the Warriors) and one of the more potent benches, especially with the recent resurgent play from Terrence Ross. It is a shame that Joseph is not getting more Sixth Man of the Year consideration because whenever he enters the game, he ups the pace of this Toronto Raptors team. He is able to relieve the pressure of dominating the ball from Lowry and is able to slice up opposing defences and either find the open man or score at the rim even if he is surrounded in traffic. You can easily make a case for the duo of T.J. Ford and Jose Calderon, but the combination of Lowry and Joseph is the undoubtedly the most lethal point guard duo this team has ever seen and it shows on both ends of the court.

With the good, there comes the bad. Of course there is more good to talk about on a 42-20 basketball team, but the Raptors are still far from perfect. The team has fallen out of the top-10 in defensive rating sitting currently at the number-13 spot. No question the absence of Carroll is a huge contributory factory, but with an unclear timetable for his return, the Raptors must be able to sharpen and toughen up while they continue patiently waiting.

Referring back to the above chart, we see a clear trend. Line-ups that include Jonas Valanciunas, Luis Scola or both struggle to stop and outscore their opposition. With his age, this should come to no surprise that Scola is defensive liability. The troubling issue though is J.V. He has made strides this season don’t get me wrong, improving and polishing both sides to his game, but he still struggles to lockdown and control the paint. In his most recent effort against Brook Lopez on Tuesday night, we saw Valanciunas’ inability to outmuscle a much more finesse type big man. If Valanciunas ever has nightmares, you can bet that Lopez is part of them. J.V. still has trouble with his lateral quickness and gets lost when opponents are running a pick-n-roll offence. Sure, there is still room for improvement, but with the playoffs quickly approaching, the Raptors must make adjustments quickly and possibly pair him down low with a Patrick Patterson who can relieve much of the stress.

Another issue the Raptors deal with is pace ranked second last. It doesn’t harm their overall point production, but it could be a concern against more grittier playoff teams. This may produce some trouble to fix with a ball-dominant guard like DeMar DeRozan, but in games where he is unable to score in bunches, the Raptors struggle to put up points as the ball stops moving when it goes into his hands. It turns into isolation offence, which leads to DeMar often throwing up an ill-advised shot. We all keep painfully reminding ourselves of how the isolation-heavy Raptors squad was dominated by a Wizards team in four games last season. This is a team must move away from this offensive ideology. If Carroll is able to return for the team’s playoff run, his ability to move well without the basketball and stretch the floor will open up more lanes for DeRozan and allow for the ball to move more smoothly. Maybe the best acquisition the Raptors could have ‘’made” at the trade deadline really was to get a healthy Carroll back?

With all these factors taken into account, the Raptors still cannot be overlooked and are slowly entering elite status in the National Basketball Association. Sure, they are not on the level of the Warriors or Spurs, but they have shown the ability to both perform and beat even the best the NBA has to offer. If they are able to finally get over the hump in the playoffs and remain healthy, this will no doubt be a dangerous team to face in a seven-game series.