Can OKC Stop the Warriors? 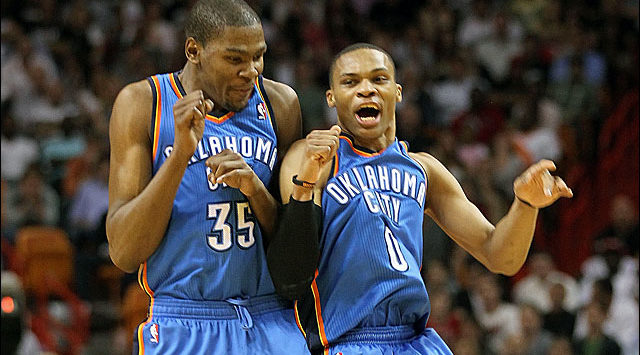 The Oklahoma City Thunder are Ready to Prove Everyone Wrong.

In an epic plot twist, the Oklahoma City Thunder will be the team attempting to take down the reigning NBA champion, Golden State Warriors. You thought we were going to see San Antonio here, didn’t you? Well there’s your first big surprise of these playoffs – a surprise for the better!

Why do I say that? Minus an undermanned loss on the Spurs’ home floor, the Warrior ran the Spurs off the court each time. I realize we’ve been calling the Spurs old for years now and they come back and prove us all wrong, but my eyes tell me that the Warriors are just too quick and too athletic for a Spurs team that will be entering an offseason with questions surrounding a couple aging cornerstone players. The Warriors are a team that spreads the floor so well and works so quickly that the Spurs just would not be able to compete.

The Warriors themselves have so far enjoyed a fairly relaxing playoff run going up against a disaster of Houston Rockets team and an inferior yet talented Portland Trailblazers team led by a stud in Damian Lillard. In both rounds, the Warriors proved to be far too deep and versatile than their opposition and of course when needed, Stephen Curry hit dagger after dagger. Now rested and more healthy, Curry and his Golden State team will go up against their first big test in the Thunder.

The Thunder started off their playoff run with a convincing obliteration of the undermanned Dallas Mavericks and then came up with a very impressive showing against the San Antonio Spurs. For an athletic and young team like the Thunder, the Spurs came out looking simply old after Game 1 of the second round series and now as they look towards their battle against the Warriors, they will be facing a far different animal.

The Thunder will again rely heavily on Russell Westbrook and Kevin Durant, but if they want to beat a team as loaded as the Warriors, they will need all the help they can get along with stout defence. Guarding Steph Curry and Klay Thompson is fairly impossible, but the Thunder will need to limit fast break opportunities, rotate quickly and keep every supporting player in check.

In a series between two of the NBA’s best offences, it will be fun to see who outslugs the other four times first. The Warriors are the more rested team having to face very little adversity all season and should be salivating for the challenge. 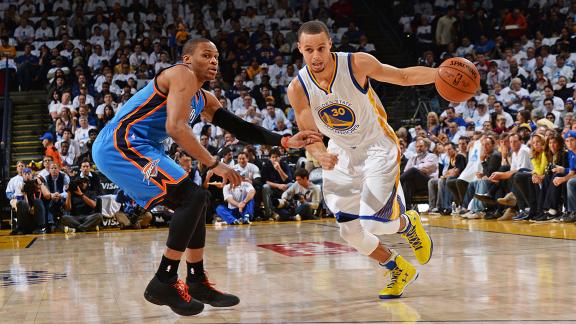 What the Warriors provide is an ability to play small like not many teams can. With Draymond Green, Harrison Barnes and Andre Iguodala interchangeable in the frontcourt, the Warriors can even use Green at the five at times using his versatility to beat on teams. Adding guys like Shaun Livingston to the mix, the Warriors are a team with so much length and a bunch of guys who can just do so many things on a basketball court, meaning this is a team that does not hold one-dimensional talent.

The Thunder have the slight advantage on the glass. Of course with Andrew Bogut, Festus Ezeli and even Maurice Speights, the Warriors do have some size, but with the mix of Serge Ibaka, Enes Kanter and Steven Adams, the Thunder were able to dominate the Spurs and will need to good rebounding to limit the Warriors chances while giving themselves more scoring opportunities.

Westbrook versus Curry will be the match up of the series. The two best point guards in the NBA provide a plethora of different skillsets. Curry is the cold-blooded marksman with the slick handle, while Westbrook is probably the most ferocious, athletic and electric player the NBA has ever seen. Unfortunately for Westbrook, he is going to have to perform with control and poise to limit turnovers and fast break points for the Warriors.
Of course then there is the Kevin Durant factor. One of, if not the best pure scorer in entire the NBA will get many looks and he will need to go at whoever is stuck guarding him. With his length and shooting ability, Durant needs to come out each night and perform to the best of his ability. If the two Thunder superstars do not combine for incredible performances, it will be tough for OKC to even hang in Golden State’s league.

Unlike most teams, the Warriors have the ability to go even 10-12 men deep. Each guy plays within his own skillset and together they feed off each other to keep putting pressure on the opposition. For the Thunder, each player will have to step up because it will be tough to take four games from quite possibly, the best team in NBA history.

For head coach Billy Donovan, defence has been the Achilles heal all season long, a pretty big issue when going up against the most explosive offence in the league. To beat this Warriors team in a playoff series, it may be a far stretch to ask the Thunder to play larger than life basketball for four of seven games. This Golden State team is just too well equipped and too good to not be in the NBA Finals yet again. The Thunder should still put up a fight, but the Warriors are on another level and should take the series in six.

Ever since their ousting from the NBA Finals at the hands of the LeBron James-led Miami Heat, the Thunder have been unable to return to the Finals stage. There is still something missing on this Thunder Squad, or it may just be time for the OKC to move on with one of their two superstars. Could the conflicting egos of Westbrook and Durant coexist on one team without impeding the team’s success? With Durant entering free agency this summer and Westbrook following suite in 2017, the Thunder’s brass will have a tough choice to make, as this duo may not be enough to take down the NBA’s top two teams in Cleveland and Golden State.

It seems like the NBA Conference Finals on both sides are the final tests for the Cavs and Warriors before the square off in another NBA Finals rematch. If both teams come out as they should, their opposition will not be able to match their talent nor their ability.