Raptors lose Game 6 but gain respect from around the league

The roller coaster ride of emotions is finally over. On Friday night in front of a packed Air Canada Centre crowd, the Toronto Raptors failed to extend their NBA Eastern Conference Finals by one more game, falling to the Cleveland Cavaliers 113-87 in a deciding Game 6.

“This whole thing, I’ve been in this league, but this is the most fun I’ve had since I’ve been in the league”, said Bismack Biyombo after the Raptors’ outstanding playoff run came to an end.

Kyle Lowry’s 35-point effort proved to be all for naught as the duo of LeBron James and Kyrie Irving outscored the Raptors backcourt 63-55 in game that just went to show the level the Cavaliers are on and on what level the Raptors should strive to one day reach.

Prior to and throughout the series, we have all heard the dozens of media outlets claiming the Raptors are no where near the league the Cavs are in – nothing more than a stepping stone for a Finals-destined Cavaliers team. That may very well be true and that is okay because the Raptors have been counted out time and time again, but the Raptors did fight and they did claw all series long. Do not let the lopsided scores fool you, for this Raptors squad has showed a lot of heart from start to finish.

Showing lots of heart may sound like just another silly cliché, but their ability to continue to fight and grind must be respected. This is a team that has proven that they are trending in the right direction, a team that has taken the next step that Raptor fans have been waiting for. Unfortunately they took on a team that was built for the title and the Raptors are just not there yet.

It is the playoffs and nothing here is meant to be easy. Because if it was, would all of this even be worth it?

For the Raptors, their Eastern Conference Finals battle could not be any more challenging. Facing a healthy Cleveland team, coming into the series playing the minimum amount of games, entering on nine days of rest. The Raptors in the meanwhile played the maximum, losing starting centre Jonas Valanciunas in the process while still hoping that DeMarre Carroll gets back into the flow of the team’s chemistry after missing the majority of the regular season. Playing every other night after two grinding series is definitely mentally exhausting and Dwane Casey made that point following the Raptors’ Game 6 loss. Of course, that is not to say this is an excuse, but it is something that took a toll on a team that was already inferior to their competition on the Conference Finals stage.

“Cleveland has been there before,” said Dwane Casey. “They understand the moment, and I think we’re getting better at it too”. 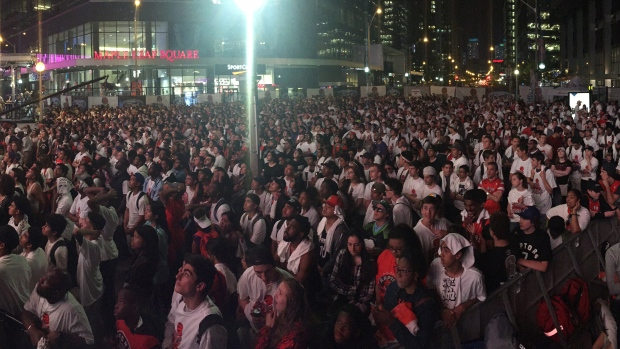 As the Cavaliers continue to chase history, the Raptors are set to enter an offseason filled with questions for the next step in their development will be the hardest yet. Anything less than a finals berth will and should be deemed as a failure for the 2016/17 season.

DeMar DeRozan may have played his final game as a Raptor. Back up centre Bismack Biyombo, who proved to be invaluable for the Raptors throughout the season and playoffs will decline his player option, becoming an unrestricted free agent and is expected to command $16-17 million dollars annually. Both DeRozan and Biz will be necessary pieces for Masai Ujiri to lock up in the offseason and then build around.

“My mindset has always been Toronto. I always preached it. “ Said DeRozan in his exit interviews regarding his pending free agency. “I was passionate about it when we were losing. When we were terrible, I said I’m going to stick through this whole thing and I want to be that guy who brings this organization to where it is now. I definitely don’t want to switch up after we win”.

It seems like the big question asked each season is have the Raptors reached their peak with this core? I think it is time to put all that talk to rest.

Dwane Casey has done an incredible job with this group of guys – a team that is knocking on the doorstep of championship contention. In a game 6 in which the Raptors All-Star backcourt combined for 55-points, they did not receive much help and that should really be the focus in the offseason. This is a team that is just one or two pieces away from overcoming a LeBron James-led team and Ujiri is the right man to get the Raptors these pieces. He has proven to be capable of getting the job done. 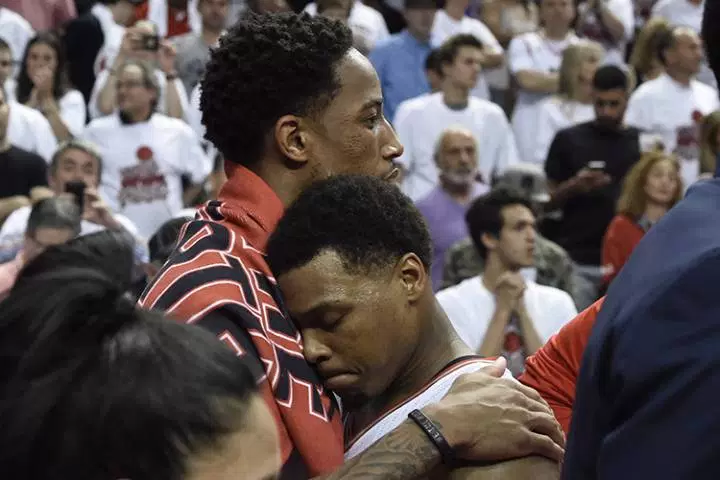 As for the home crowd, it is one of the best in the entire league making the Air Canada Centre a lethal place to play for any NBA team. You want a home court advantage? The ‘We The North’ movement is quickly taking over the NBA landscape.

“Do you hear this?” Were the first words coming out of LeBron James’ mouth in his postgame interview with ESPN’s Doris Burke. “Unbelievable respect and much respect to these fans, to this country. This is unbelievable, I have never been a part of something like this in my 13-year career, this is special”.
Sure, the Oracle Arena and the OKC Thunder get their share of attention for their rowdy home crowd, but there may be no greater environment than the frenzy that is the ACC. Very quickly, whether it be Paul George and now LeBron, the Raptor home crowd is putting the NBA on notice.

It is far too early to sit and discuss whether DeRozan is a max contract player or if Biz is worth Tristan Thompson money. Both have turned into leaders on this young team whether it is on the defensive end, the offensive side of the ball or in the locker room.

Let’s look at the championship calibre teams. The Warriors, the Cavs, even the Spurs from a couple years back. They all have and had reliable shooters surrounding the stars. Patty Mills, Danny Green, Channing Frye, Harrison Barnes, the list goes on and on. Floor spacers, guy who and put three quick points on the board as opposed to the boring two.

When the Cavs drop 17 of 31 three pointers on the Raptors, even if most have been very well contested, the Raptors just cannot match that fire power. Patrick Patterson has been inconsistent and it is unfair to expect DeMarre Carroll to be firing on all cylinders coming off a bad knee. Luis Scola should not be forced to shoot threes, but Terrence Ross may have been a crucial revelation for the Raptors in these playoffs. The Raptors have depth; they just have to add more of a scoring punch. A reliable starting power forward will help as well.

Maybe they will have to go over luxury tax to support what they bring in, but this is a team that must have title on their mind in 2016-17, and if that means spending a little more, they cannot afford to fall into the Oklahoma Thunder way of thinking (remember how they cut ties with James Harden). The Cavs will be paying a hefty amount after this season, but that is a sacrifice title contenders must be willing to make and it is something the Raptors brass should heavily consider.

Now again, it is far too early to start planning for the offseason off the heels of elimination, but soon enough, the brainstorming process will begin. The Raptors and its fans should be incredibly proud of this team – proud, but not satisfied as there is still more to come from a Raptors team that is ready to break into the league of the NBA’s elite.

The journey is always what makes the end goal sweeter. This year was a glorious success and should be celebrated as the best season in Toronto Raptors franchise history.