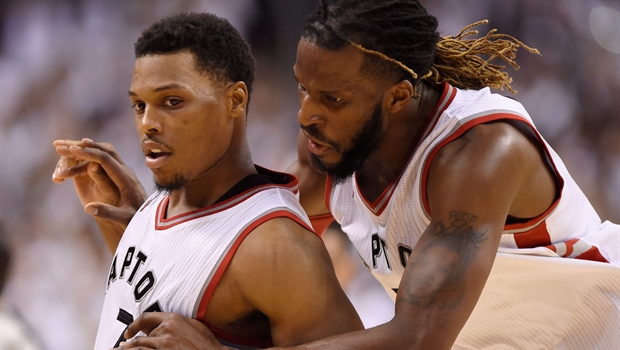 Raptors dodge a bullet and tie up the series at one a piece.

We may be running out of narratives to describe this Raptor playoff run, but at least it’s been an entertaining ride. Rest assured, Toronto sports fans are getting their moneys worth each and every night, even in some cases when a nice comfortable would be just fine. But as we all know that is not how Toronto sports works. Hell, I may really need to take a week away from work, the Internet, and society after this series – if I even make it that far that is.

A 96-92 overtime win was a nail-biter in every sense of the term. The Raptors are a gritty team that is never out of any ballgame, which in way is a great thing, but at the same time is the most nerve-wracking aspect of watching them play.

Lead changes, comebacks, and edge of the seat fast-paced craziness and at the end of the night, the Raptors pulled out the main stat – the ‘W’. What came out of the night’s win was what every basketball aficionado has been preaching since the start of the playoffs. The Raptors have no excuses in the first two rounds. The Pacers and the Heat, although playoff calibre teams, are not the Raptors. The only team you would expect the Raptors to struggle with are the Cleveland Cavaliers and rightfully so. The Raptors and Cavs finished the regular season as the one and two-seeds while the rest of the field was clustered and separated by tiebreakers or one win margins. That should speak to how far ahead the two teams were. Star power and depth are what puts the Cavs and Raps ahead of the likes of the Heat, the Hawks or the Pacers.

When we as fans and all-knowing basketball geniuses analyzed what the next step for this team was going into the playoffs, there has never been a straight answer. The Raptors made it to the playoffs three years ago, but fell short in a Game 7 to the Brooklyn Nets – a clear first step towards relevancy. This followed by a big step back last season against the Washington Wizards in a series that shall no longer be mentioned or spoken of.

This year, the spotlight has been on the Raptors to ascend the Eastern Conference ladder and to become contenders right from the start. Jonas Valanciunas was re-signed. Even Terrence Ross was inked to a new deal and DeMar DeRozan was entering his walk year. The Raptors brain trust has invested so much on their core and the 2016 playoffs were set as the testing grounds where management could determine if this unit is for real or just simply, a façade. On paper and from their regular season performance, we can easily say that this is a conference finals team that should go on and challenge the Cavs. That has been the next step all along. Beating the teams you have to beat, proving elite status in the conference followed by giving LeBron James and the Cavs a run for their money. Getting the first round monkey of their back was never the next step. It was an obstacle, but the ultimate goal is to see that this core group of guys can hang with the best. The Heat are not the best. They’re close, but they are not there yet, especially with Chris Bosh out for the remainder of the playoffs. 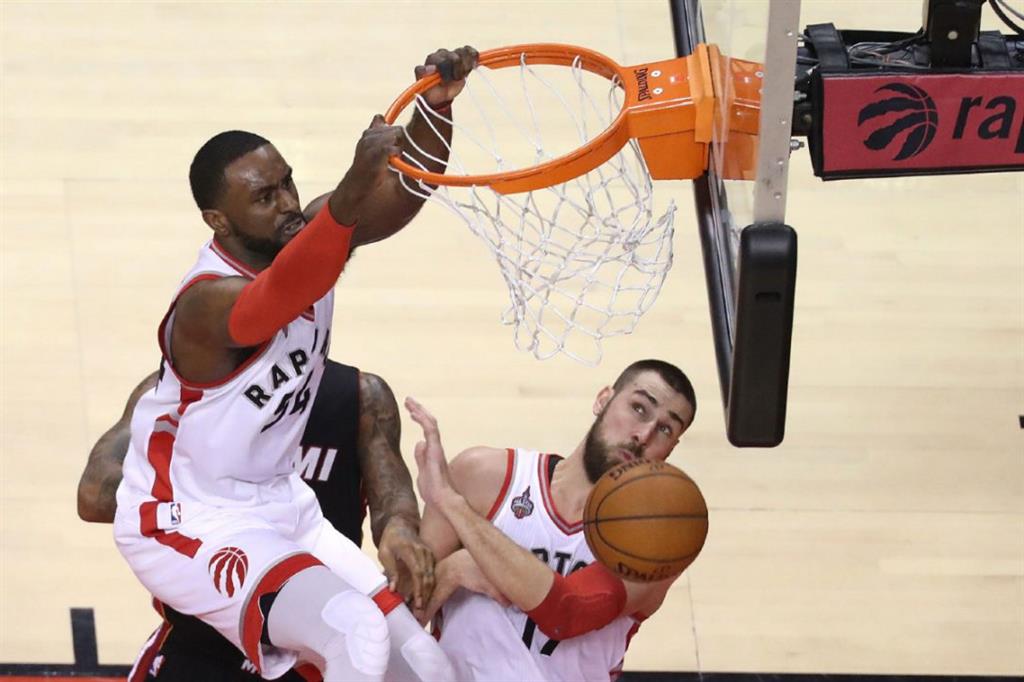 The fate of the Raptors offseason rests on this series and this series alone. Is this team’s core good enough? Or is it time to move on and reshuffle the deck?

That being said, the story of Game 2 was very telling. The Heat gave the game everything they had and although Miami was sloppy at times, essentially this is the Heat team at the height of their skill level. They are a solid defensive team, similar to the Raptors in a way with their gritty, hard-nosed nature, but the same depth is not there. Aside from maybe Josh Richardson, there is no offensive punch to speak off. Joe Johnson, Dwyane Wade and Goran Dragic may very well get their buckets, but neither of the three are a Paul George. Wade and Johnson although great players are past their prime and although a great point guard, Dragic is not an elite point guard that can take over ball games.

Aside from these three players, there really is nothing else to speak off. Hassan Whiteside was flat-out abused by Jonas Valanciunas in both games and it really should not come as any surprise. This is Whiteside’s first go in the playoffs, while J.V. is now a young veteran. Valanciunas understands his game, while Whiteside does not. He is a great defensive presence, but Whiteside gambles a lot on defence and will try to block anything. Sure, with that mentality he will get his fair share of blocks, but simultaneously, the Raptors will be able to attack and score a bunch of baskets as well.

Whenever the Raptors attacked the heart of the Heat defence, the area the Raptors lived in all regular season, good things happen. As the series shifts to Miami, the goal is simple, keep attacking Whiteside. He is a young inexperienced player and if the Raptors can get him into early foul trouble, the Heat will have zero rim protection and that is when the Raptors can even blow the Heat out. There really are no great defenders apart from a Loul Deng on the Heat perimeter. The Heat defence relies heavily on the back up that Whiteside provides and without him in the game, they will get exposed.

You know something is terribly wrong when even Terrence Ross has himself two straight field days. I’m just saying. 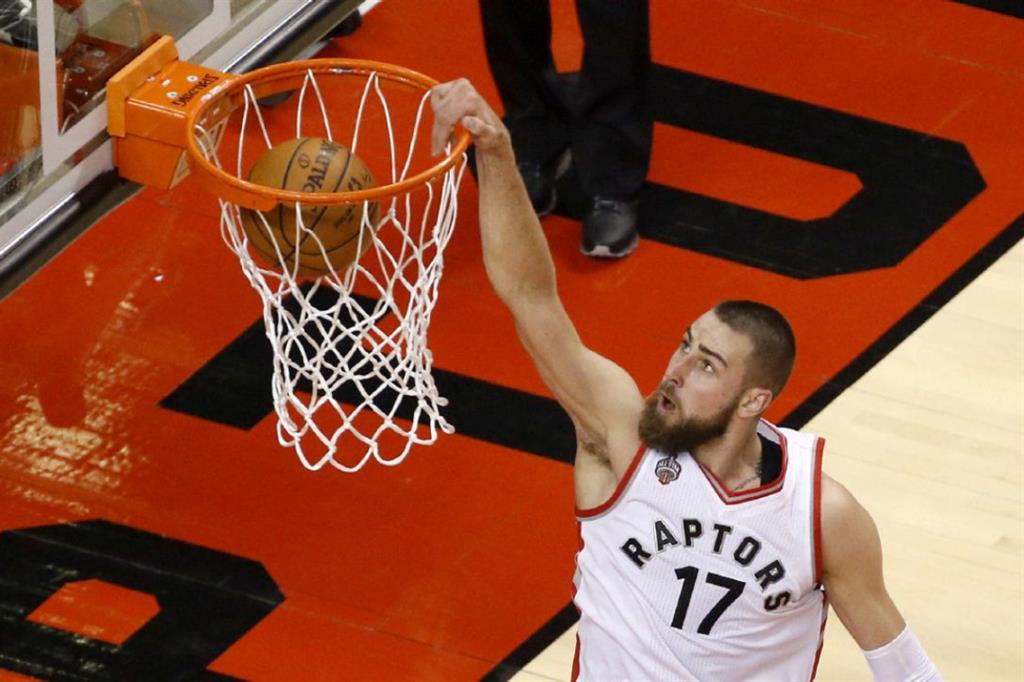 Last but not least, the man who needed to show up did exactly that. Kyle Lowry finally made his presence felt in the playoffs. Lowry did his usual part providing all the hustle plays, the three steals, the dirty work we associate with him, but he also netted 18 big points. Granted it was on a non-efficient 7/22 shooting night, but at the end of the game when he hit two clutch shots to help the Raptors grab onto a late lead, for the first time in the playoffs, we saw confidence oozing out of Lowry. If he can carry this level of confidence over to Miami remains to be seen, but if Lowry can build on his Game 2 performance, the Heat may need to change up their entire strategy for how they slow down the Raptors – and quick.

So with yet another sigh of relief, the series is tied at ones. The Raptors remain undefeated in the postseason, moving to 4-0 in games after losses and all is well in Toronto again for the time being. DeMarre Carroll offered incredible minutes, leading the way with 21-points. Cory Joseph was easily the best defensive player of the game, Jonas was a monster and Lowry won most likely to succeed. In a tight fought game, there are many positives that come out of the win and that is exactly what the playoffs are all about. No one expected blow out after blow out and the way a team wins the close games is a true mark of a contending squad. The Raptor’s never-say-die attitude should count for something and if the Raptors continue to return to their style of play, building on the positives with each the day, Miami will unquestionably begin to feel the heat!