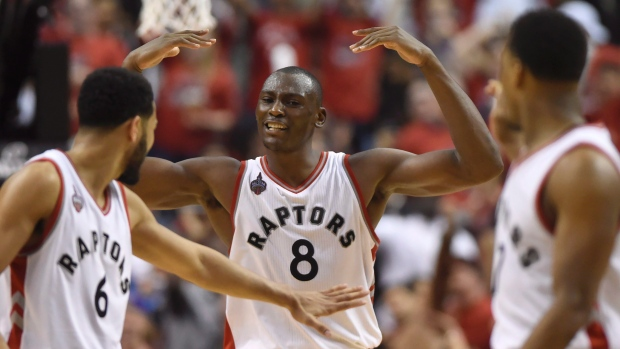 Solid Team Effort Gets Raptors Back into the Series

On Saturday night, the Toronto Raptors overcame the Cleveland Cavaliers; they overcame a masterful flopping clinic put on full display by none other than LeBron James, and overcame an NBA officiating travesty to get themselves back into the series. As the Raptors cut the Cavs’ series lead to 2-1, the Raps have done something that neither the Atlanta Hawks or the Detroit Pistons were able to do – beat the Cavaliers in a playoff game, while silencing critics in the process.

Yes, the talk coming out of tonight’s game will be far different than that of the aftermath of the first two games. A Cavaliers team that has scored over 100-points in each one of their first ten playoff games, was limited to only 84-points on 35% shooting as the Raptors came out on top with an emphatic 99-84 victory.

In a game that felt far closer than it actually was, partially because it’s the good old Raptors and primarily because of downright brutal officiating, the Raptors overcame the odds with a convincing performance. The Cavs may have a ridiculous 73-46 advantages in the foul call department, but in Game 3, the Raptors took care of all the other numbers. 46% shooting from the field while grabbing 14 more rebounds than the Cavs was the telling tale of the night.

Bismack Biyombo led the charge with a franchise record 26-boards and four blocked shots with his teammates taking care of the rest, stifling the Cavs to their worst shooting performance in this postseason. Kevin Love and Kyrie Irving combined for just 16-points on 4/28 shooting and all of a sudden, the Cavs looked mortal – maybe even very beatable.

Speaking of Biz, the dude has been non-stop grinding all over the court all season long. Remember that Tristan Thompson guy? He’s the guy who got a big, massive deal from the Cavs just a year ago? Well, what if I told you that Biz looks like a better more energetic version of Thompson and when he does reach free agency, his asking price will be insane as it should be. Biyombo offers a Dennis Rodman-like presence, which is a dying art in an NBA where big men now shoot threes with their eyes closed.

Aside from Biz and the defence, The Raptor backcourt showed up. With J.R. Smith and Kyrie Irving defending, the Raps held the clear advantage. On Saturday night, DeMar DeRozan kept his hot series going with a 32-point outburst on 50% from the floor, while his running mate, Lowry added 20-points on 54% shooting. Even Cory Joseph added 14-points on 60% shooting off the bench. 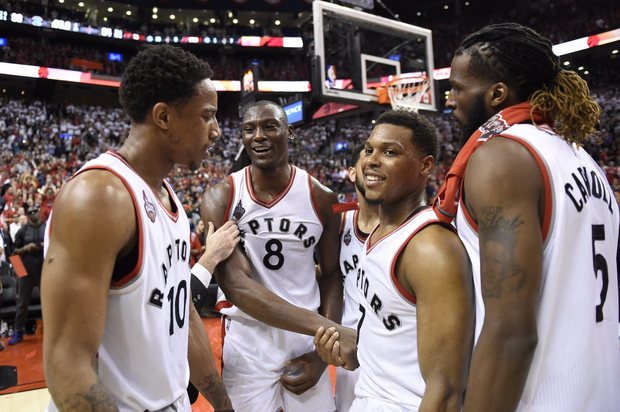 In a near perfect performance, the Raptors cleaned up everything they needed to in order to make this a series again. The outrebounded the Cavs, paced them in the three point category, overmatched them with guard play, Close quarters effectively and outhustled the favourites. In fact, we rarely see the Raptors losing ball games when they play the hard-nosed, gritty and efficient basketball style they are accustomed to.

If I can get a nickel for each time I’ve said this these playoffs, I’d be able to afford Raptor playoff tickets. All joking aside, this is how the Raptors will gain respect. This is a team that has been counted out before the series even begun. No body south of the border has given the Raptors any credit, but now, this a team making a case to be noticed. Only way to silence critics is by staying to the style of basketball that has deservingly got them to this stage.

Nothing more can really be said about this Raptor team’s Game 3 performance. This is a team that clawed and fought for this win. Biyombo battled all night long, DeRozan clawed for every offensive opportunity, the defence rotated quickly and efficiently attempting to close out on everything.

Oh, and one last thing – isn’t it amazing what a little bit of ball movement can do for an offence? Sure, you cannot expect near perfection from the Raptors every night, and near perfection may be the only way the Raptors can beat the Cavs, but as fans, we must embrace these sorts of games and understand how far this team has come. One win in an NBA Eastern Conference Finals round may not mean much, but in the grand scheme of things, it is a remarkable accomplishment for a franchise outcast the NBA and the American sporting media.

If anyone has doubted this team going into these playoffs, they cannot doubt them anymore! 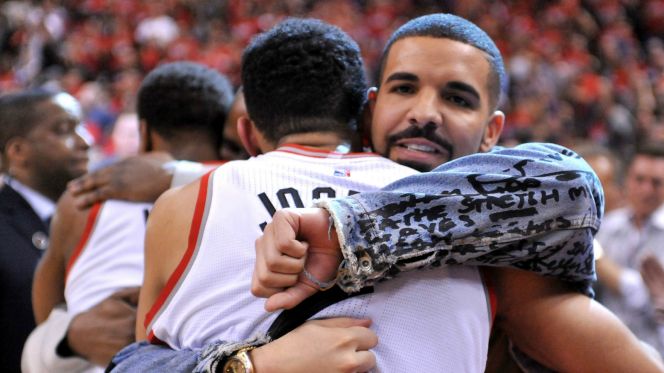 As Game 3 is now behind us, the Raptors will need to replicate this effort come Game 4. The Cavs will no doubt come out more aggressively with a better game plan. The Raptors will need to be ready for everything that comes their way. One thing is for sure; do not expect the duo of Irving and Love to shoot 4/28 again in this series even if Irving was seen hobbling off the floor after Saturday’s ball game. The Raptors must continue staying true to their roots – playing gritty, play past the brutal officiating, keep the ball moving and play physical, but smart basketball.

If the Raptors win by another double-digit margin, no body will mind the LeBron James theatrics. But word of advise, it is not a good look when a dude flexes and points at his muscles after ‘grown man’ lay-ups, but then flops when getting slapped in the face by his own teammate in a skirmish. You’re either a tough guy or you’re not, Bron-Bron, at 31-years of age, its time to stick with one or the other.

Also, a big shout out to Dwane Casey for calling out NBA officiating in the most politically correct manner possible. Although he will most definitely be getting a friendly call in the morning from the league office, the politics game has already begun for Game 4. There were complaints after the first two games about the lack of calls against the Cavs, but quite frankly, the Raptors did not attack or apply enough pressure onto the Cavalier defence for the complaints to be warranted. In Game 3, the Raptors could not stop attacking the paint and in the fourth quarter of a must-win game for the 6ix squad, the officials gave the Raptors zero free throws and swallowed the whistle. Call it what you will, but beating the Cavaliers is already a tall task, but when officiating is backing one team more than the other, the uphill battle turns near impossible.

As the madness and excitement of Game 3’s big win fades and the focus turns to the next game. There very well may be only 12 people on this planet who think that they can beat the Cavaliers and these 12 people should go out in the remaining games of this series and play with the guts and desire that they showed in Game 3. In the playoffs anything can happen, and maybe this Raptor team can keep this magical ride going!