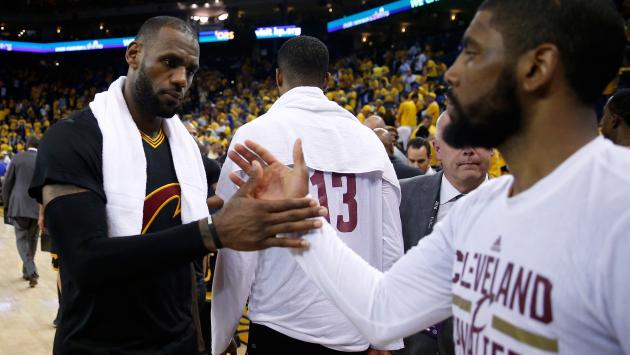 On the Backs of Lebron and Kyrie, the Cavs Live Another Day

On Monday night, the Cleveland Cavaliers battled to see another day with a 112-97 Game 5 victory at the not-so-friendly confines of the Oracle Arena in the Bay area. The NBA did their part, suspending Golden State’s emotional leader and two-time NBA Defensive Player of the Year runner-up, Draymond Green for the title-clinching game and the Cavaliers fulfilled their side of the bargain by stretching the series by at least one more game. Now that’s good for business!

As usually the case in most Cavalier wins, the ‘Big 3’ led the charge, combining for an astounding 84-points. That’s 41 for Kyrie Irving and LeBron James apiece, and just two-points for the other guy in 33-minutes of work.

Game 5 was really all about two guys in particular. LeBron James pulled off a 41/16/7 on 53% shooting in his most dominating performance in this year’s Finals thus far, while his partner in crime; Kyrie Irving added his own 41 to go along with six assists on an incredible 71% shooting from the field. So essentially, the tandem scored or assisted on 97-points for the Cavs, matching the entire Golden State offence – pretty dominant if I can say so myself. Add Kevin Love’s lone basket of the game to that and there’s your game winning shot.

Now back to the two stars. No two teammates have ever scored 40-or more points in the same NBA Finals game until the Cavalier duo accomplished that feat on Monday night. What makes the accomplishment so much more impressive for Kyrie is that since 1970, only one person has been able to score at least 40-points on at least 70% shooting on the same stage – Wilt Chamberlain – exclusive company for Irving who never has the luxury of dunking over smaller dudes. In a second half with their NBA season on the line, James and Irving outscore the entire Golden State Warriors team 39-to-36.

Now as the series shifts back to Quicken Loans in the Cleveland, the Cavaliers will need an encore of Game 5 from their two stars. It has become something of a near-miracle for a team to beat the Warriors in two straight games and with the returning Green traveling with the team back to Cleveland, the Cavs will not have as easy of a time to score, especially one LeBron James. 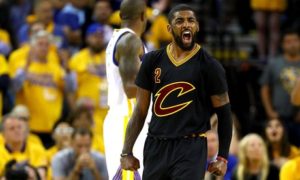 The combination of Andre Iguodala and Draymond Green has really irritated and disrupted LeBron throughout the series and if he and his team hope for history to not repeat itself, LeBron will have to show up in a big way. No body wants to lose a Finals series on their home court in a Game 6 two straight seasons to the same opponent. The game plan for the Cavs will remain the same – take it one game at a time and continue to attack the much smaller Golden State team.

For the Warriors, Klay Thompson was one of the few bright spots in Game 5, scoring a team high 37-points on 55% from the field. Mr. MVP added 25-points of his points on a poor 38% shooting night.

With Andrew Bogut going down with a knee injury and the absence of Green, two of the Warriors’ best screen-setters were out of action for the most part (Bogut only saw eight minutes of game time). The two enable Steph Curry to work off screens to find better shots and without them, the Cavs were able to really zone in on Curry. We were all curious to see how different the Warriors would look without Draymond Green in the line-up and his absence really did leave a glaring hole on both sides of the court.

It will be foolish to think that the Cavalier stars can combine for the same sort of dominance again in this series. There is a reason it has never been done until Monday night after all. That being said, the Cavaliers will be in desperate need to get something out of Kevin Love – yes, that other guy! A few threes from J.R. Smith will be appreciated as well.

Draymond Green will no doubt return with a purpose and pushing LeBron and Kyrie for 40-plus minutes a night will turn costly for Tyron Lue and the Cavaliers. If the Cavs really want to challenge the Warriors, they will need more from the rest of the team. Unless of course the LeBron-Kyrie duo go off twice more, but relying on that cannot be something the Cavs hang their heads on. 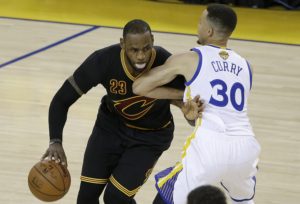 The Cavaliers have only lost one time on their home floor in the 2016 NBA Playoffs, that loss coming at the hands of the defending champs themselves. The Cavs are beatable at home, but coming off a huge win on the road, the Cavs must ride that momentum in Game 6. A good start will be the key for the Cavaliers. Keeping the firepower of the Warriors to a minimum early on will allow the Cavs to establish an offensive flow, to get their home crowd into it and to ride that energy.

This will be the game where the Steve Kerr and the Warriors will rely heavily on their unanimous MVP, Steph Curry. For the second straight Finals, Curry has not played up to expectations. Through five games this time around, only once have we seen the guy who terrorized the league on his way to a second straight MVP trophy. In a Game 6 on enemy territory, the Warriors definitely do not want to return for a winner-take-all Game 7 and will therefore have to follow the lead of their superstar.

In the second elimination game of these NBA Finals, the action will no doubt be exhilarating. Can the star power of LeBron and Kyrie continue to carry the load against the best team in NBA history, or will the Splash Brothers and the returning Draymond Green put an end to the Cavalier year and cement what has been a magical season for the 73-9 Golden State Warriors.