The End of an Era?

Gracious in victory, humble in defeat is what we have come to associate with the great Tim Duncan. A model of consistency, leading not with his voice, but with his play, the seemingly age-defying Duncan has been the backbone for every San Antonio Spurs team for the past 19 seasons.

Now, recently turned 40, our modern-day version of Bill Russell has been replaced by a man who is desperately trying to fight father time. After another solid season for Duncan, his performance dropped off and he saw himself be reduced to a minuscule role in the Spurs 2016 playoff run. On a team that finished at 67-15, its best record in franchise history, the future Hall of Famer was seen riding the bench more often than not as the younger Spurs were now relied upon to bring the team to championship glory. The duo of Kawhi Leonard and LaMarcus Aldridge now hold the reigns as the big three of Tim Duncan, Manu Ginobili and Tony Parker continue to be faded out into the background.

After a near 20 years of excellence, it was a sight that not many fans were able to predict or were ready to see come in these playoffs. Duncan has been the anchor for each and every Spurs team since his rookie season and in these playoffs, he was a shell of himself. In a six game collapse to the far younger and far more athletic Oklahoma City Thunder, Duncan scored just 17 points through the first five games of the series and despite the 19 he netted in Game 6, that sum does not hide the diminishing play that we have seen out of one of the game’s greats.

Fact is, if this is the last we have seen of Tim Duncan, he will not be remembered for his performance in these playoffs or even this entire season. He will be remembered as the greatest power forward to ever play the game. He has been the most reliable basketball player to build an NBA dynasty around since Michael Jordan, and behind him, the Spurs have become a model of excellence, a first class organization that has led by example for now two decades.

In the closing minutes of Game 6, coach Pop did not take out his big man, allowing him to ride out into the sunset of the Spurs 2016 season and quite possibly the sunset of his career with no applause, quietly, and exactly how anyone would expect Duncan to bow out. Quite frankly, Duncan was never been similar to the ‘Admiral’ David Robinson, his mentor when he first came into the league. Robinson went out on top as an NBA champion, and although Duncan deserved the same send off, the under-the-radar character of Duncan may be perfectly fitted to leave the sport in this way. Not at the pinnacle of the NBA world with the spotlight on him and his team, but as supporting character of a greater playoff tale, leaving in the absence of a curtain call. 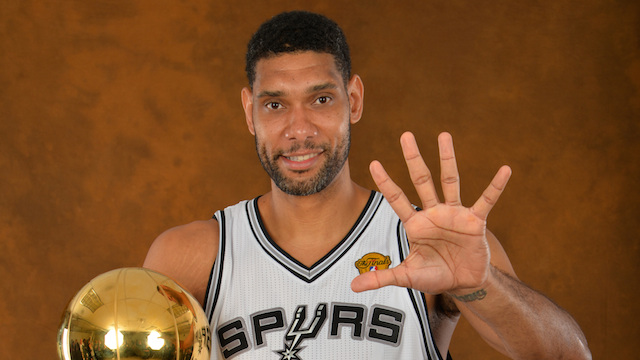 Coming off a brutal, injury-riddled season, the Spurs drafted the four-year senior Tim Duncan out of Wake Forest who with Robinson helped transform the Spurs from a 20-62 squad to a fifth seeded playoff team. The following season, Duncan helped lead the Spurs to their first NBA title. Duncan would go on to winning a grand total of five NBA championships with the Spurs, winning two league MVPs along the way, making it onto 15 NBA All-Star team rosters in the process.

On the playoff stage was where Duncan turned himself into a household name. He is second in all time playoff games played (251), second in playoff wins (157), sixth in points (5,172), third in rebound (2,859) and first in double-doubles (164). The three-time NBA Finals MVP encapsulated what it meant to be a San Antonio Spur and the only jersey he wore his entire career up to this point, he has worn with pride and humility.

There is still no telling on if this is the end of a great career for the ‘Big Fundamental’ and the ageless wonder may even surprise us with a 20th season. Surrounded by great players and playing in an even better system, what made Duncan different from other legends is that he never seen himself as a larger than life personality who was greater than any one of his teammates, much less the franchise. He was part of a great system, a great organization and checked his ego at the door on a nightly basis. He was never about individual stats, but always about the team and picking up wins.

A unique player who sacrificed money, shots and playing time to keep the Spurs a contending team for two decades. There is a reason why only three things are guaranteed in life according to San Antonio fans, them being death, taxes and Spurs success. Duncan always focused on team success and that is what made him a true superstar.

Reports have been surfacing that people close to Duncan believe that this is it for Duncan. At the end of a great 2016-year we may be bidding farewell to two of the game’s greats in Kobe Bryant and Tim Duncan and both left on their own terms in the perfect fashion. Bryant with an over-the-top, year-long celebration of a Hall of Fame worthy career, while Duncan with a quiet departure that truly is why he defines “the Spurs way”.