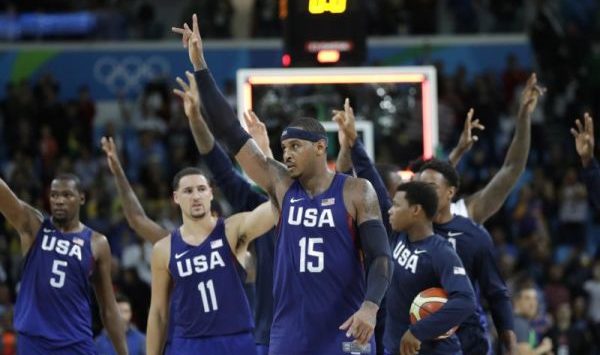 A week into the Olympic games from Rio and the USA Men’s Team is living the life. Quite literarily, it is hard to imagine that either one of them have broken a sweat or stopped fooling around since the start of the round robin tournament. And for good reason too. Through three games, the Americans have outscored their opposition by a combined total of 111-points.

It’s a new tournament, but the same exact American squad narrative, destroying each and every team that is placed in front of them.

That is, until their first big test came in the form of Andrew Bogut and Team Australia, but even then, the Americans were able to escape right before Kevin Durant switched sides, largely in part to the late game heroics of Kyrie Irving and Carmelo Anthony. With the wounds still fresh in the hearts of Draymond Green, Harrison Barnes and Klay Thompson, Irving went ‘Uncle Drew’, hitting a few daggers to help finish off the Australians.

After destroying China and Venezuela by a combined score of 101-points, yes, 101- points, you have read that correctly, the Americans faced some problems against the very physical Australians. Taking notes from their Aussie women’s Rugby Seven gold-winning peers, Bogut and fellow NBA teammate, Matthew Dellavedova, attempted a far more aggressive approach as they tried to make the Americans more uncomfortable on both sides of the court.

The tournament’s leading scorer Patty Mills led Australia with 30-points as the Australians took a slim five-point lead into halftime – a slim lead that would not last much longer. Behind 50-combined points, including 31 from Melo, the Americans staged a comeback, coming out of the game still undefeated, maintaining their perfect tournament record with a 98-88 win.

With Serbia and France still to come in the qualification stage, the Americans now shift their focus on not repeating the scare they have faced against Australia. With the star power assembled on the US squad, anything short of a gold medal won in emphatic fashion would be a huge disappointment and maybe even a miracle for the opposition.

Judging off the Snapchat of most US athletes, it seems like there is very little concern.

Moving away from the near upset in Rio, Carmelo Anthony has been the big name on the American side. After telling the media, that if he wins three Olympic golds, he would be able to survive not ever winning an NBA Championship, Melo would go on and break the US Olympic points record, surpassing LeBron James and the Admiral, David Robinson in his third game of the tournament.

Unlike Derrick Rose, who for some very odd reason, believes that the Knicks are one of the two super teams in the NBA, Melo has accepted his NBA faith. At the very least, he does have his NCAA Championship while playing with the Syracuse Orange!

Shifting focus away from the Americans, yes, other countries are in this tournament, the Lithuanians led by Raptor’s centre, Jonas Valanciunas sit at the helm of Group B after taking care of business against the Argentines, improving to 3-0 on the tournament as well.

Shockingly, neither Valanciunas nor Thunder’s rookie big man Domantas Sabonis have been the most impressive players on the Lithuanian side through three games. Mindausgas Kuzminskas, or far more simply, ‘Kuzia’, the New York Knicks forward dropped a huge 23-points to take care of Manu Ginobili, Luis Scola and the rest of the Argentinian squad, while Mantas Kalnietis, has been the leading scorer for the Lithuanians in the early goings of the tournament. 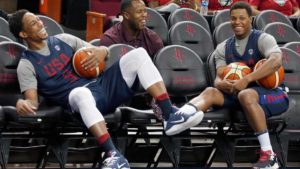 The big disappointment of the Olympics so far, have been the Spaniards, a country wildly recognized as being one of the top basketball nations in the world, right behind the Americans, are currently 1-2 in the tournament, with two heartbreaking losses against lackluster competition. First one coming at the hands of Bogdan Bogdanovic and the Croatians, the Spaniards were unable to outduel the far younger and more dynamic Croatians.

And for once, a Philadelphia 76er came up clutch in the winding seconds of a basketball game. Normally with minutes remaining in a ball game, the Sixers see themselves down a couple dozen baskets, but in this game, it was Dario Saric blocking a final attempt at tying the game from Spanish star, Pau Gasol, securing the upset victory for Croatia.

The Spanish side did not fair much better in their second game of the tournament as Marcello Huertas paced the Brazilians past the Spaniards by a miniscule one-point margin. Yes, the Marcello Huertas, the young Laker guard and Shaqtin’ a Fool regular, was able to lead his team past the powerhouse Spaniards. Thankfully, the Spanish were able to win their first game against the Nigerians as they currently occupy the fourth and final spot in hopes of moving past the qualification stage.

With only two games remaining in the qualification round for each team, the Americans have shown signs of mortality, which only increases excitement for the later stages of the tournament. Aside from the Americans, the Australians have clearly been very impressive, but so too have been the Lithuanians, the Argentines, the Croatians and as per usual, the French.

Next up for DeMar DeRozan, Kyle Lowry and the Americans are the Serbians, with the biggest test to date coming on the last day of qualifications against the French who are led by Tony Parker, Boris Diaw, Nick Batum, and former Raptor great, Nando de Colo.

With the path to the next round all but set for the Americans, it will no doubt be very interesting to see how team USA fair in the next leg of the tournament. With Rudy Gobert, the French will offer some size against the Americans, and if teams copy the Australian blueprint and attempt to make the Americans uncomfortable through aggressive play, the Americans may very well be defeated.

At the very least, maybe I am just hyping up the impossible. For all we know, game three for the Americans was nothing more than an outlier and then again, the American squad won by double digits.

Will this be the Olympics that we see an absolute shock? Or will the US maintain status quo and continue their dominant path on their way to yet another Olympic gold medal?