Can Westbrook Carry The Thunder Back Into NBA Relevance?!

For the last number of seasons there has been constant discussion and chatter revolving around who the Batman of Oklahoma City is and who is his faithful sidekick, Robin. Who is the Kim Possible to the other’s Ron Stoppable? The Shrek to the other’s Donkey?

For years, the answer has always been Kevin Durant, at least as heard from most people and media outlets, with Russell Westbrook playing second fiddle.

There really is no correct answer.

Kevin Durant, a 6’9’’, freak of nature with a ridiculous vertical reach was the Thunder’s second overall pick in the 2007 NBA Draft back in the Seattle days. Since being drafted, the seven-time All-Star Durant would average 27.4 points over his nine seasons with the team, showing the ability to shoot from literally anywhere on the court, over literally anyone attempting to defend him. Once upon a time, KD even sat at the top of the NBA universe, being named its most valuable player in the 2013-14 season.

On the other hand, there is Russell Westbrook. In many ways, the complete opposite of what Kevin Durant brings to the table. While Durant brings forth a calm presence, a smooth game with a killer shot that cannot be stopped, Westbrook is reckless, aggressive, explosive, and is the type of dude who will bully you into giving him your lunch money.

Drafted fourth overall, a year after Durant, the Thunder had their core duo in place – a superstar duo that was brought into take the Thunder back into NBA relevance. 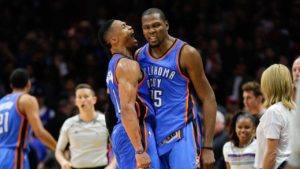 Soon enough, that was exactly what happened. Behind their two stars and the support of guys like James Harden and Serge Ibaka along the way, the Thunder were able to reach the playoffs consistently, making it to the NBA Finals once, a run which alas ended with a loss to the LeBron James-led Miami Heat.

Fast forward to today. James Harden is long gone, manning the ship in Houston. Serge Ibaka was sent packing for Disney Land, while Kevin Durant has decided to take his talents to the Bay Area and join the Golden State Warriors. All that remains from the one-time young core of the Thunder is Russell Westbrook, now the unquestioned leader of the new look Thunder. With Durant now gone, the ball will be in the hands of Westbrook and quite possibly, knowing the player he is, only in the hands of Westbrook.

If you are a fantasy guy, you want Russell Westbrook first overall because he will fill up every category on the stat sheet as Russ will be responsible in keeping the Thunder above sea level as a contending playoff team. With his competitive fire, you can bet that Russell Westbrook will do anything to top the success of the Warriors as unlikely and impossible as it may seem on paper and eventually, in reality.
What does Russ have left to work with?

For one thing, the Thunder have finally been able to get a hold of a shooting guard that can help the team, not only on the defensive end, but the offensive end of the floor as well. Just before Durant made the decision that would break the hearts of Thunders fans everywhere, Sam Presti committed highway robbery when he acquired Victor Oladipo along with a high upside rookie in Domantas Sabonis for the final year of Serge Ibaka, a player reaching the mantle of ‘overrated’.

Along with Sabonis, the Thunder boast even more size with Enes Kanter and Steven Adams. Also, Nick Collison is still hanging around, because why would he not be? The NBA landscape may change on a yearly even monthly basis, but one thing seems to never change and that is Collison being a continually undervalued, yet important role player on the Thunder bench.

Entering his sophomore season will be Cameron Payne. He’s the guy who does pregame dances with Russell Westbrook and believe it or not, the kid can actually ball. Really, he can! He will have the chance now to show off his potential in a much larger role. With an NBA season under his belt, Payne will have to fill in as Westbrook’s primary back up.

Will the supporting cast be enough to will the Thunder into the play offs, or dare I say, contention?

Between the Warriors, Spurs, and the Clippers, the top three spots in the West should be all but locked up. After which, it is a free for all.

With the Marc Gasol and Mike Conley making their returns from their injury-riddled seasons, the Grizzlies will go back to being that gritty Memphis team that gets a top five playoff seed only to become a tough out in the first or second round. With an overpaid Chandler Parsons, there is no reason to believe the Grizz cannot make some noise in the West. 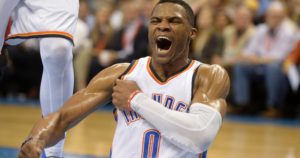 Corey Brewer claims James Harden is ready to bring his defensive prowess to the court in the 2016-17 season so maybe the Dwight Howard-less Rockets can make some waves in the West as well. Despite the mess of a summer the Blazers have had, giving out massive contracts to anyone who wants to join their ascension, the back court of C.J. McCollum and Damian Lillard will keep Portland interesting.

Will Anthony Davis and the hornets stay healthy? Will the young Utah Jazz take the next big step? Does Dirk Nowitzki and the Dallas Mavericks have anything left in the tank?

Seems like the back-end of the West Conference is anyone’s for the taking. Anyone’s not named the Los Angeles Lakers, the Sacramento Kings, Denver Nuggets, Phoenix Suns, and Minnesota Timber Wolves. There are five teams already that are complete write offs, which should give Westbrook all the confidence in the world that he can will his team into the dance.

On Westbrook’s shoulders alone, the Thunder have the ability to make the playoffs, after which, it will be a tough road ahead. Can Westbrook will the team past the first round? No doubt the competition will be one of the West’s big three powerhouses. That may be where the line ends for Westbrook.

Based on the drafting prowess of Sam Presti, a new contract for Westbrook, and a few nice and young pieces, this will ultimately be a year of learning for the Thunder after a near decade of dominating (without winning). By learning, I mean taking a look at the roster at this point and seeing what the team has to work with moving forward and how the unit can be improved long term.

How will the backcourt of Westbrook, Oladipo and Payne fit? How will the three young bigs, Sabonis, Adams, and Kanter mesh? What will the next move be? What should be added next to continue to push the Thunder back into contention in the post-KD era?

There are a lot of questions at this point in time that are still unanswered. Only way to find the answers is to see what Head Coach Billy Donovan can do with Russell Westbrook and the talent around them.

After seeing their time in the spotlight, the Thunder reverts back to the beginning. It is the vicious cycle of sports. Draft some nice players, signs some talented free agents, traded for some key pieces and make the push to the title. No team stays together forever and when its main components move on, it is time to go back to square one. The Thunder are back at square one, but thankfully with one of the best basketball players on the planet in Russell Westbrook and that alone should give Thunder fans and management alike hope for the future.