The Grind of the NBA Offseason

It is very difficult to make it to the NBA, but it is only that much harder to remain in the league that holds 400 of the best basketball players in the world. The constant grind doesn’t end after game number 82, or Game 7 of the NBA finals – the grind continues into the offseason where NBA stars continue to work on improving their games, reinventing themselves, and getting stronger in an effort to prolong their careers and maintain their level of production and greatness.

In professional sports, the grind never ends and ironically, it is the best of the best who put in the most work. The Steph Currys and the LeBron James’ of the world are the ones who spend countless hours in the gym and in the workout room aiming to become better than they were in past years looking to build on their legacies.

In Steph Curry’s case, becoming a two-time league most valuable player did not only come from hours upon hours of throwing up shots in the gym. Curry has developed deadly footwork and the strength to manoeuvre in the painted area under the net where the far bigger and stronger players bang.

Hours of Zumba and ball handling drills with NBA legend Steve Nash has helped Curry with his footwork and wicked handle. As well, since 2011, Curry has trained with the same team, working on improving his versatility, and training in smaller spaces forcing him to be resourceful and to optimize the equipment that he has to his disposal. These training sessions include TRX-training, weights work; agility tests and even mental training that sees Steph undergo quizzes with study flash cards during his workouts.

“Overload” is the term that comes to mind in the case of offseason training for Curry and many other NBA stars. To take their bodies to the absolute limit is how these athletes expand their game, improve and continue being great. If they do not do it, someone else will and will most certainly take their spot at the very top.

One of the NBA’s best wing defenders, Andre Iguodala, trains five times a week in his offseason, which includes heavy lift days, and nearly two hours of intense shooting sessions a day which do not stop until he sinks 500 shots. He also includes daily ball handling series of drills to improve his off-hand.

It is hard-nosed training sessions like these that take NBA players to the next level. What separates them from the players that do not stick is the time they put in between games. Summer vacations do not exist.

King James has a hardcore regimen of his own, one that includes him waking up before 5:00am in his offseason. Nothing screams time off work than waking up before the sunrise to start training! Being the lean build specimen that he is, LeBron’s workouts focus more on his explosiveness and power as oppose to gaining even more mass. Low-rep of heavy weight explosive training mixed in with a lot of cardio training helps James stay on the court longer at peak performance.

Prior to his historic championship-winning 2015-16 campaign, James did three-a-day workouts, five times a week, a regimen that LeBron claimed he greatly improved from despite getting enough adequate rest.

If you want to one day eclipse the legacy that Michael Jordan has left behind, LeBron James puts in the work to continue being great; work that most players who only aspire to be half of what LeBron James is do not exude.

Other stars like Paul George have very different yet still just as challenging offseason workout programs. George, one of the rising superstars in the league, suffered a terrifying, career-changing foot injury that cost him almost all of the 2014-15 season. With the doubts of George reclaiming his past form, George ramped up his offseason training, targeting rehabbing his injury and regaining his explosiveness and athleticism, while continuing to add more to his in-game arsenal. 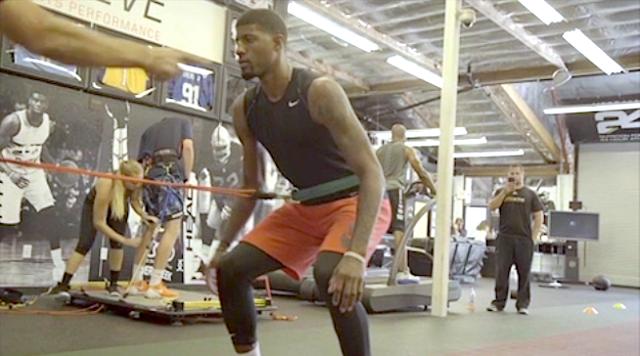 As the 2015-16 season came to a close, not only the George reclaimed his superstar status, but also his athleticism and explosiveness did not falter, and he reached new heights asserting himself as one of the best players in the game. Without persistent rehab training, the return to form would not have been possible for even the U.S. team Olympian, Paul George.

There are many other NBA athletes who have crazy insane workout plans in their offseason. There are not many Eddy Curry’s around, and the guys that put in the work, more often than not, succeed on the court.

Joakim Noah for instance works with professional surfer Laird Hamilton, focusing on swimming workouts with helped Noah gain almost 10 extra pounds of lean muscle mass. Sharpshooter, Kyle Korver takes it to the extreme by training in shark-infested waters. Before the 2013 season, Korver had to paddle board 25-miles into the Pacific Ocean, while the following offseason, Korver did 5K relays on the ocean floor using 85-pound rocks to weigh him down. Come the 2014 season, Korver set a new all-time record for most consecutive games with a 3-pointer (a record that Steph Curry later broke). Whatever keeps life interesting, right?

Then there is Dwyane Wade who plays dodge ball in his workouts to maintain agility and adjust his body when he goes airborne in games while attacking the basket. All of these are methods that NBA players use to shock the system and to increase performance.

The NBA is truly a 12-month sport, a full year-long job and NBA players must be ready for that grind or they will quickly learn that making it to the show is nothing near the amount of work ethic that will keep you around in the show. There have been many NBA players who broke into the league at 18 or 19 based on athleticism and naturally-born talents alone, but in the NBA, where everyone has that athleticism and those natural gifts, only the ones who continue to grind, who continue to work survive.