Without Much Competition, The U.S Cruises In Rio

To the surprise of absolutely no one, the U.S. Men’s Olympic squad has won yet another golden medal. As per usual, there was not much resistance as the NBA star-filled roster made quick work of Serbia in the gold medal game, winning by a score of 96-66.

The Olympics begun with the States laying down a pounding to their opposition in the qualifying stages and concluded with yet another embarrassing beat down in the Finals. Year after year, be it the FIBA World Cup or the Olympics, the narrative has always remained consistent. The team that Jerry Colangelo and the Americans fields may have some different faces each time around, but the results stay the same – the Americans reign supreme, and their runners up cannot even compete.

Team President Colangelo did not hesitate to call other the American competition either at the conclusion of the Olympic Games. Basketball on the Olympic stage has become more predictable than the NBA itself and that is a scary thing as at the commencement of every NBA season, only three to five of 30 teams really have any sort of chance to win a championship. If I were a betting man, I would bet my entire house on the American team winning gold at the 2020 Tokyo Summer Olympics.

The 2020 games, albeit four years from now, I sit here confident as ever in my bet and wouldn’t even sweat for a second – not now, not four years from now. The fact is the Americans will unfortunately (or fortunately if you are American yourself) always reign supreme in the game of basketball as no other country invests in the sport as much as the Americans do. Mix in the population that America has and there is really no possible way to top them.

As the NBA continues to expand its borders, we see more and more players from many countries around the world entering the league. That is all fine and dandy and I commend the NBA for attempting to push their game worldwide. 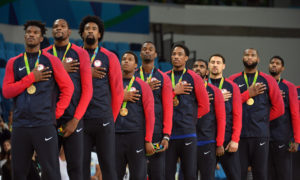 Most notably, Spain is producing a lot of talent worthy of the NBA spotlight, yet somehow, with the Gasols, the Jose Calderons, the Ricky Rubios, even the Juan Carlos-Navarros (yes, he is still alive), the Americans have eliminated the Spanish in each of the past five or six Olympics Games. That is 20-plus years of one team dominating the second best basketball nation in the world over and over again.

How are the Americans so dominate? The opposition ages and vanishes, but the Americans are the only country still standing tall. Pau Gasol and the Spaniards time playing second fiddle to the Americans seems to be ending as the Spanish stars age. Manu Ginobili is done with the Argentinians, the Tony Parker era has come to a close in France. Dirk Nowitzki ended his tenure with the German squad and no one even realized that Germany was not even in this year’s Olympics.

In U.S.A., when Kobe Bryant, Kevin Durant and Carmelo Anthony are no longer representing their country, Paul George, Kyrie Irving, and Klay Thompson fill their shoes and the shear dominance continues. It is a well-oiled machine, Kobe and Klay are just spokes on the wheel. The wheel will keep turning as more oil is pumped in, and new players will continue to be developed and new faces will be seen repping their red, white and blue squad each and every Olympics and World Cup tournament.

This is the case not only in terms of basketball. One must not look further than this Olympics’ medal standings. The Americans have nearly doubled up their runner-ups in medal count and have yet again demolished the competition. 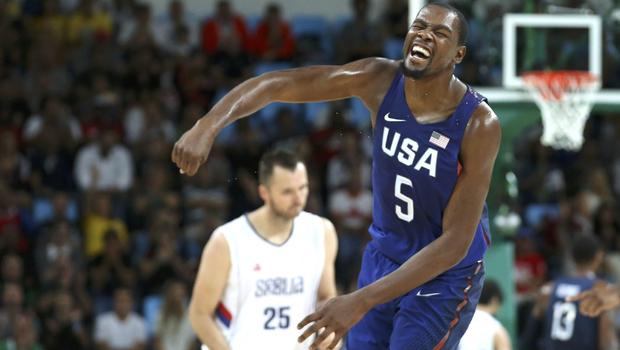 When Cory Joseph and Tristan Thompson want to get NBA recognition and go pro, they go to Nevada for high school ball after which they play for the University of Texas. They do not play for Carleton’s basketball program, one of the top basketball institutions in Canada, located in Ottawa. When a 16-year old Canadian kid throws 91 mph in front of University of British Columbia scouts, it’s impressive simply because very few 16 year olds can even top 85 in Canada. When the prospect heads down to a baseball tournament in the States for his age group, every American pitcher throws 90-plus with regularity. NFL-aspiring players do not accept scholarships from Western University or University of Alberta; they head to Alabama, Clemson, or Oklahoma.

That is how the sporting world works, not just in the sport of basketball, but in all sports and athletics and that is how it will continue to work until another country makes the same commitment to sports that the States consistently make year in and year out.

While basketball ‘powerhouses’ like Argentina, Spain and France see their expiration date arriving faster than ever, the Americans continue to win. It is one thing to see more international players enter the league; at this point they are all anomalies and outliers. The NBA is still dominated by Americans.
There are 30 teams in the NBA, the best basketball league in the world, and it is very easy to make a case that on 27-28 the top player, maybe even the top two or three players on each squad is American.

This is not because American creates basketball talent like China creates everything else. It is because the States fund and develop their children.

Michael Porter and DeAndre Ayton are the two top prospect slated to be picked up in the 2018 NBA draft. These two dudes are kids! 2018 classman! They just turned 18 and they are still growing! Ayton is from the Bahamas, but where is he being developed? You guessed it – the States!

Yao Ming was the first big NBA name out of China. He has become a legend back home and no doubt has inspired millions of kids to follow in Yao’s footsteps to become NBA stars across the pond. How many great Chinese players have we seen since Yao Ming, now an ambassador of the sport in China? I count zero and please do not include Yi Jianlian, because no.

If Jerry Colangelo and Mr. Gregg Popovich want to see more competition in upcoming Olympics and world tournaments, it will not come. Basketball talent does not grow on trees. Not in Spain, not in Argentina, not even in the U.S., talent is found, talent is developed and developed is funded by countries and institution that expect greatness. Until the world does this exact thing and fund the development of talent, in this case basketball, no country will ever come close to the United States.

The U.S.A. is back in their rightful spot at the top of the basketball universe. Your move, competition!