Damian Lillard, Not Your Ordinary Baller that Raps 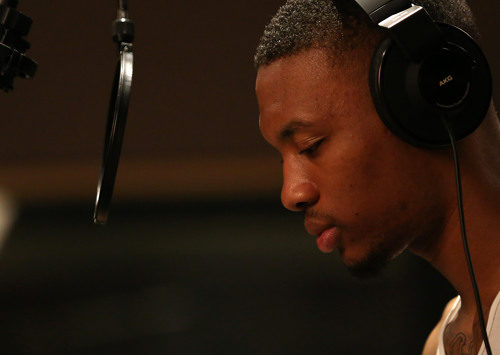 Exclusive Interview with the Rapper that Happens to Ball

Damian Lillard is the superstar point guard on the Portland Trailblazers. He is a former Rookie of the Year and a two-time NBA All-Star.

Coming off another great NBA season, the former first round pick continued to establish himself as one of the game’s best as the Blazers continue to move onwards from the LaMarcus Aldridge days.

On the court, he is exciting, explosive, agile, and ruthless, but little did anyone know, Lillard brings that same excitement off the court into the studio room as well. Damian Lillard, otherwise known as Dame D.O.L.L.A. may be even more ruthless on the mic than he is on the basketball court. This may be tough to imagine, but the former Weber State Wildcat has some serious talent.

Lillard may just be the best rapper the NBA has ever produced and he can spit some serious bars. Not Shaquille O’neal, Iman Shumpert type bars, no, Dame D.O.L.L.A. is really good. The word play, the flow, the lyricism, the emotion in his raps, Lillard is a performer in every sense of the term.

In July 2015, Damian Lillard the rapper made his first public debut in the world of hip-hop when he dropped his first official single, ‘Soldier in the Game’ via SoundCloud. A catchy, yet hard beat, J. Cole like flow, passionate lyricism and Dame D.O.L.L.A. was born.

Plain and simple, you do not make it onto ‘Sway in the Morning’ if you can’t spit some legitimate fire. Lillard came on the morning radio show on Eminem’s Shade45 channel on SeriusXM! and amazed the legendary radio show host by demonstrating his rap talents in the form of an insanely impressive freestyle over All-Star weekend.

Lillard did not stop there. On Martin Luther King Day, Lillard released another single, ‘Bigger than Us’. A song filled with powerful lyrics referring to social injustice in the United States and a call for peace, equality and unity, Lillard attempted to use positivity in his word play to inspire a nation to make love as opposed to creating more hate.

Lillard, much like NFL Star Colin Kaepernick understands that he has a voice and his decision to speak out and leave such a powerful message behind is a token to the type of individual that Lillard truly is.

From humble beginnings, Lillard grew up in the rough and dangerous suburban area of Oakland California.

“Oakland streets are no joke. It’s a little different for us coming out of there,” says Oaktown native and NBA legend Gary Payton. “(Lillard’s) got so much dog in him and that’s what I love about him. That’s what he carries from Oakland in his game to the NBA now.”

Lillard was never a top, must-see prospect. He was never the high school kid that basketball scouts clambered towards. He was not heavily recruited and was only rated a two star prospect by Rivals.com. He played in a mid-major school in Ogden, Utah, called Weber State and in 2008 was ranked the 48th best point guard college prospect. 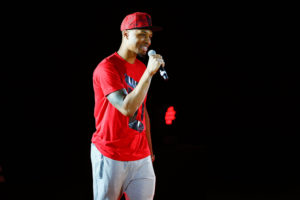 None of that stopped Lillard from becoming what he is today and he does not back away from referring to his come up in his music. Nothing was ever given to Lillard, he worked for everything he has earned as he now gets to shine on the NBA stage in front of tens of thousands of fans on a nightly basis.

Lillard continues to make his own raps, recently releasing the song, “They Sleep”, as well as being a focal fixture in a state farm commercial in which he portrays a baby and raps over a pretty sweet beat. Other singles of Lillard include ‘Isley’, ‘Talk to ‘Em’, and ‘Shook Ones’.

BALLnROLL was recently able to catch up to the 26-year old Portland Trailblazers’ star and part time rapper for an exclusive interview, giving us some of his precious time.  And we appreciate it!

BallnRoll: Give us a quick background and timeline that took you from loving and listening to rap to that moment where you said, ‘damn! I’ve got some skill’?

Lillard: I was in the 9th grade when I started to think I could rap. I knew how the rap patterns of my favourite rappers flowed and I could follow their patterns very well.

BallnRoll: In the song you released on MLK day, ‘Bigger than us’, you wanted to convey a very powerful message to society. What did you hope to capture, express in the lyrics of that song?

Lillard: I wrote the lyrics to Bigger Than Us myself; something I take a lot of pride in. My hope was to get people to start communicating, working together, show love & respect to one another. That we are all equals and everyone deserves a fair shot.

BallnRoll: Who are your musical inspirations? Are there any styles from past rappers that you try combining in your work?

Lillard: Tupac, Nas, Lil Wayne, Juvenile, Jadakiss, J. Cole. I try to combine all of them into my music. J. Cole is my favourite.

Lillard: The experience was really cool! People really took to it and it caught on quick. There’s incredible talent out there. Now there is a platform to share bars and skills – it’s a growing community. I look forward to seeing the posts every Friday.

BallnRoll: There have been reportedly many record labels who attempt to sign you, are you currently paving a post NBA rap career? Is it something you are considering?

Lillard: I’ve created my own record label so stay tuned… I definitely plan on rapping when my NBA playing days come to an end.

BallnRoll: Rumours have it Mason Plumlee has some flow of his own. Any freestyle, battles with him or any other teammates happening on the road or the locker room?

BallnRoll: Other than rap and R&B, any other music gets you going that we would be surprised to hear?