The ‘Big Ticket’ Hangs Up His Kicks After 21 Seasons

It’s finally officially, after weeks of speculation, the ‘Big Ticket’ has punched out for the final time. On September 23, Kevin Garnett announced on his Instagram page that he has decided to call it a career after 22-NBA seasons.

At first we thought we would see Garnett suit up one last time with the Wolves, then we heard speculations of a buyout and KG’s legs being unable to endure another NBA season. Kevin Garnett has given the sport of basketball everything he had to offer and after 22-season, the sport he loved broke down his body rendering him into retirement.

When the 40-year old Garnett looks back at his career, he can look back with pride as he is set to retire as one of the greatest power forwards to ever play the game, a fierce competitor, a winner and the guy who made Glen Davis cry mid-game.

Making a grown man cry on live television is pretty remarkable so I’d add it to KG’s list of accomplishments. How many grown men did you make cry in front of a few tens of thousands of people?

Kevin Garnett has always played with an edge, a certain fire that you see very rarely in the game, but he backed that intensity with his level of play on the basketball court.

After becoming a McDonald’s All-America in high school and winning a national player of the year award, Garnett opted to bypass college and enter the 1995 NBA draft. He wouldn’t stay on the board long as the Minnesota Timberwolves snatched the 6’11’’ big man with the fifth overall picking, making Garnett the first NBA player drafted straight out of high school in two decades.

The ‘Big Ticket’ would punch in from day one, leading the Wolves to eight straight playoff appearances, including a Western Conference Finals berth in 2004, the year he won the NBA Most Valuable Player award. 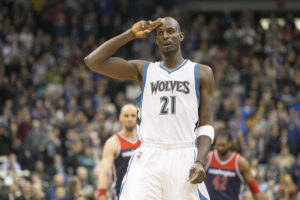 Until 2007, Garnett was the face of the Minnesota Timberwolves franchise, but one thing has eluded him for the 12 Seasons that he spent in the ‘Twin Cities’. While the two legends that were constantly brought up in the same breath as KG, Kobe Bryant and Tim Duncan, had NBA rings in their trophy rooms, Garnett kept coming up short.

The turning point in Garnett’s career came on July 31, 2007, when a huge trade was struck. The Boston Celtics would trade everything they can put their hands on which included, Al Jefferson, Ryan Gomes, Sebastian Telfair, Gerald Green, Theo Ratliff, cash, and two first round pick (one of which was a top 3 protected pick) for the services of Kevin Garnett.

Together with the newly acquired Ray Allen and Paul Pierce, the Celtics would form the newest green version of ‘The Big Three’, dubbed the 21st century version of Larry Bird, Kevin Mchale, and Robert Parish.

Cue the year of “Anything is Possible!” as Kevin Garnett was finally able to break through and hoist his first and only NBA Championship of his storied career.

With the Celtics, Garnett continued to cement his legacy as one of the greatest power forwards to step onto the basketball court. He was as great offensively as he was on the other end of the court. In 2008, Garnett would add an NBA Defensive Player of the Year award to his resume, which should no doubt go along nicely with his 12 All-NBA Defensive Team selections (nine of which were first team nods).

After a short-lived and underwhelming couple of seasons in Brooklyn, Garnett returned to the city that drafted him and turned him from a young high school stand out into an NBA superstar.

With little left to offer on the basketball court, Garnett’s career has finally come full circle. His legs have been giving in; his body has been breaking down over the years of wear and tear that he endured. With the Nets, Mason Plumlee was making a case for more playing time, limiting Garnett’s role, while in Minnesota, the array of young stars forced Garnett into a player-coach role – a role that Garnett has accepted and run with.

The game has a funny way of teaching its players respect, and Kevin Garnett has earned it. He will go down as the great player in Timberwolves history and has seemingly passed on the torch to his heir in Karl-Anthony Towns – a career that has come full circle.

Garnett had seemingly had nothing left to give to the game and after over 20 NBA seasons; the future hall of famer will enter retirement on his own terms. 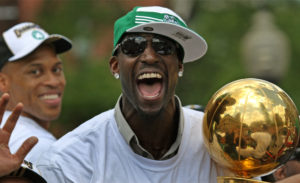 What does he leave behind? A legacy of a player that has won an NBA ring, an MVP award, a guy who has made 15-NBA All-Star rosters, won four rebounding titles, an Olympic gold medal and in the process has impacted all the players that we have the pleasure of watching grow and develop today. From Rajon Rondo and Glen Davis in his Boston days, to Mason Plumlee during his tenure in Brooklyn and lastly to Towns, Andrew Wiggins, and Zach Lavine of the Wolves – Kevin Garnett may no longer be seen on an NBA court, but his legacy will continue to live on and his number will one day be hanging from the rafters in Minneapolis and quite possibly in TD Gardens in Boston as well.

From a rookie and a student, to a star, to a hall of fame, and lastly a professor, Garnett has done it all in his career and has earned the right to leave the game as a legend.

This offseason we have bid farewell to three greats of the game, starting with Kobe Bryant, then Tim Duncan, and lastly Kevin Garnett.

All that is left to say is, the 2021 Hall of Fame ballot is going to be stacked!