How do those Around the Association Feel About the QB’s Protests?

Since news broke several weeks ago that San Francisco 49ers backup QB Colin Kaepernick would be refusing to stand during the national anthem at games as a form of protest against oppression of people of colour in the US, there have been all kinds of reactions—both for and against the signal caller’s controversial decision. Most notably though, several fellow NFL players have either chosen to join him in kneeling during the anthem, or have shown solidarity for the protest by raising their fists in the manner that became associated with black-power movements in the 1960s.

With NBA preseason games still weeks away, it’s unclear whether or not this trend will seep its way into the Association. Interestingly, however, the NBA has a precedent for this kind of occurrence. During the 1995-96 season, Denver Nuggets guard Mahmoud Abdul-Rauf chose to sit for the anthem because he felt that the US flag was viewed around the world as a symbol of oppression. Unlike Kaepernick, who has been allowed to continue sitting/kneeling, he was fined $32,000 and suspended for a game.

There haven’t been an overwhelming number of responses quite yet to this protest from NBA players, but a small group have publicly shared their feelings on the story. Most have been fairly supportive or understanding of Kaepernick’s decision. Here’s what they’ve come out and said so far.

The young Milwaukee Bucks forward hasn’t given much commentary on the protests or whether or not he will be standing when the games begin, but he’s made it firmly known which side of things he stands on with regard to the issue in general, thanks to this potent Instagram post. 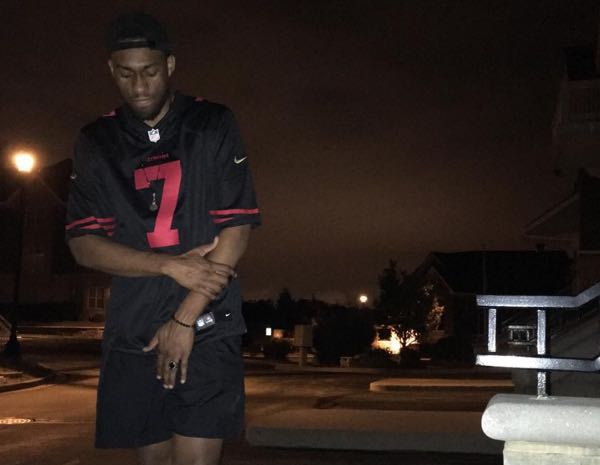 Reigning MVP Steph Curry weighed in on Kaepernick’s protests when he was asked about it during a Q&A at a TechCrunch event in San Francisco. He gave a diplomatic response that was supportive, but didn’t put him in total agreement with his fellow Bay Area athlete.

“I’ll most likely stand,” Curry clarified. “If you follow the way he [Kaepernick] talks and the message he’s trying to send with his act, from his mouth, he’s not disrespecting veterans. He’s not disrespecting military. That’s not his intention. He’s obviously continued the act to create a conversation for more social justice and things of that nature [….] And so, that’s not the way that I would do it, but I support him in his attempt to start a conversation or continue the conversation.”

Golden State’s prized free agent acquisition, Kevin Durant, took a similar stance, noting that the QB should not be ashamed in any way for what he is doing.

“I’m behind anyone who stands up for what they believe in,” Durant said. “Colin Kaepernick is standing up for what he believes in. That’s what makes our country so great, right? You have the luxury to do so. He was unapologetic about it and, in his defense, I don’t think he was trying to disrespect anyone. I think he was trying to get his point across. I’m all for anyone who wants to do that.”

Finally, Draymond Green joined the conversation by tweeting about an interview he had watched with Miami Dolphins owner Steven Ross, who defended players that were protesting the anthem.

TMZ tracked down Swaggy P outside an LA club where he delivered some off the cuff remarks that could position him as one of the leaders of the protests in the NBA—should he actually follow through with them.

We’ll see how Young reacts when the season rolls around, and if his decision to sit, kneel, or stand has less to do with his whether his “knees hurt” and are hopefully a serious reflection of his view towards the situation in America.

Just prior to the Big Diesel’s Hall of Fame induction ceremony last week, he made an appearance on a Fox News talk show where he was asked about Kaepernick. Unlike the current players mentioned above, he had a bit of a harsher take on the protest. Shaq questioned Kaepernick’s timing on the issue of inequality and wondered aloud why he is only starting to do these demonstrations now. The legendary center also spoke favourably of the law enforcement and military in America, a stance he believes does not have to conflict with his identity as a black individual.