NBA Players Strutting their Style in the Big Apple

You may have seen this photo that surfaced this week of Russell Westbrook and Iman Shumpert working out with Kristaps Porzingis in New York. While the NYC visitors undoubtedly spent a few hours in the gym, it’s clear that they put in their real work at the New York Fashion Week events, balling out in outfits that the rest of us simpletons could never dream of pulling off. The eight-day fashion bonanza has also seen the likes of Monta Ellis and hometown star Carmelo Anthony make several appearances. Here are some of the pics from the week that have been making their rounds throughout the Internet. 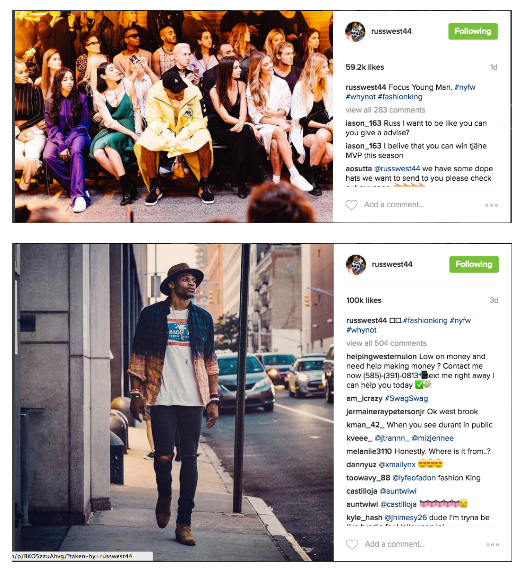 Whether he’s in the stands or out on the streets (or up at the postgame podium), Russell Westbrook always dresses to impress. If he wants to call himself the #fashionking, can anybody really stop him? And apparently, it’s stylish to be rocking t-shirts from the Beastie Boys’ 1995 Ill Communication tour, which is exactly what Russ has on underneath his chic button-up.

The OKC point guard also scored himself a gig as a Guest Fashion Director for Barneys, a swanky New York clothing line. I wonder how that stacks up for him against his All-NBA First team selection this past spring.

Westbrook linked up with his workout buddy Iman at the DKNY show, where they took their outfit choices in drastically different directions. It’s probably safe to assume that Russ is the first person to ever rock high-end Jordans while wearing a massive yellow coat.

Later on, Shumpert looked right at home cozying up with his wife Teyana Taylor at the Kith show. Meanwhile, Monta Ellis has been very active all week, spending lots of time at events and parties with his wife Juanika Ellis. The couple were such a hit that they were even featured together in Essence Magazine. 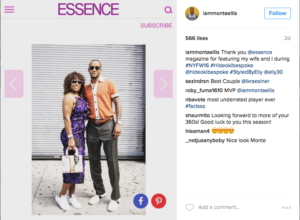 And last but not least, what would NYFW be without Melo getting in on the action? After all the success he had with Team USA this summer, he’s certainly earned the spotlight and admiration of the public. Plus, he might need to soak up all the good vibes he can right now in case the oft-injured Derrick Rose and Joakim Noah go down and the Knicks find themselves out of the playoffs for a fourth straight year.