Staying Busy off the Court

I don’t know if this is becoming a thing or not, but it is starting to seem like more and more NBA players are using parts of their off-court time dabbling in the fashion industry.

Most recently, Anthony Davis, the star big man, who by the way has somehow grown an extra inch upon reporting to training camp, has formed a partnership with Saks Fifth Avenue and together are launching a brand new Fall collection!

The partnership dubbed “Saks Fifth Avenue X Anthony Davis” marks the first time the fashion company has ever collaborated with a professional athlete. The autumn collection officially launched on August 10, in 23 Saks Fifth Avenue stores, a tribute to the number that Davis dons on a nightly basis with his New Orleans Pelicans. The limited edition collection was also sold online via saks.com.

“Since launching in 2009, Saks Fifth Avenue Collection has grown into one of Saks’ largest selling menswear brands,” said Tom Ott, the Senior Vice President of Saks Fifth Avenue. “We are thrilled to collaborate with NBA all-star Anthony Davis on an exclusive Capsule for our beloved private label. Our customers will be pleasantly surprised by the combined ingenuity of the Saks Design team and the visionary imagination of Davis – the result yields a bold look for luxe athleisure.” 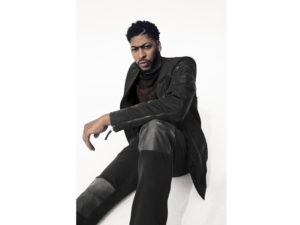 The collection itself is comprised of 11-unique styles. These styles range from mixed media bomber jackets and neoprene shorts to graphic T-shirts and designer joggers. The collection is meant to push fashion versatility as well as is a higher-class street style of clothes.

“I wanted to bring athleisure to the next level,” stated Anthony Davis on the launch of his new collection. “Collaborating with Saks Fifth Avenue on an exclusive capsule was a dream come true. I was very hands on with the entire process, from choosing the prints to designing the silhouettes – this capsule truly embodies my fashion perspective.”

Despite his on-court talents, one thing is for sure, Davis has an eye for style!