Championship Glory Back in L.A.

13 seconds left in the game and Lynx superstar Maya Moore hit a huge turnaround jumper in front of an electric Target Centre in Minnesota.

It is 76-75 in favour of the Minnesota Lynx as the Los Angeles Sparks dribbled the ball up the court for what would be the possible final shot of the WNBA Finals. The series was tied at two and with only a few seconds left in Game 5 and the Lynx were looking to close out the Sparks.

The clock counting down, Sparks now more desperate than ever, especially after giving up a huge basket on the other end of the court just ten seconds prior.

With 3.1 seconds remaining in the instant WNBA classic, Sparks star Nneka Ogwumike sunk the winning shot on a putback putting an end to the Lynx hopes of repeating as champions. Sudden shock and dismay ran through the hearts of the 19,423 fans in the Target Center hoping to see the Lynx repeat, but as time expired, it was the Sparks who were celebrating at centre court.

In a 77-76 L.A. Sparks victory, the finale of the 20th season of the WNBA had everything. Clutch shots, key rebounds, controversy, and above all excitement. As the WNBA continues to fight for increased popularity, their 20th anniversary was a huge step in the right direction.

The Maya Moore-led Lynx had the best record in the league at 28-6. The Sparks just happened to hold the second best mark at 26-8. Prior to the season, the WNBA scrapped away the conference affiliation for the playoffs, meaning the Sparks and Lynx, two Western Conference teams, would potentially be able to square off in the WNBA Finals.

That is exactly what went onto happen as the two best teams squared off for WNBA glory. After five hard-fought games, it would come down to the closing seconds of the final match to decide the better basketball team.

“The team that won this game deserved to win this game,” said a devastated Maya Moore Moore in a postgame interview. “It’s just hard to have it come that close. The crowd was awesome, and we’re so appreciative of all the support and energy that they brought us, and we gave it everything we had.” 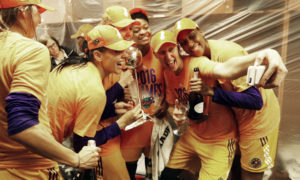 For the Sparks, it was Candace Parker who finally realized her life-long dream. The former NCAA National champion, WNBA most valuable player, and one of the biggest names the WNBA has ever produced, finally got to hoist her first ever WNBA championship.

It was the Sparks’ first title since 2002 and Parker was able to add the chip and a WNBA Finals MVP to her already incredible resume after the Sparks centre dropped 28-points and 12-boards in the winning performance.

Pat Summitt, who coached Parker from 2005-2008 at Tennessee, tragically passed away this past June at the age of 64.

“This last year has been pretty tough for me personally,” said Parker, filled with the emotions of victory. “My teammates and my coaches are always there for me. I think I’m excited because we won the championship, but the journey to get here, I wouldn’t want to do it with anybody else. It’s amazing when you surround yourself with great people how fun it is and how exciting is when you get what you want”.

The former first overall pick also made sure to thank team co-owner and former Laker great, Magic Johnson for believing in her and the Sparks on their championship run.

With a third title added to their collection, the Los Angeles Sparks are now a single championship away from tying the Houston comets for most titles in WNBA history. With the Comets no longer a franchise and the core that the Sparks have in place, it is not out of the realm of possibility that the Sparks cannot be back on the WNBA pedestal this time next season.