How Can Dwane Casey Set up the 2016-17 Toronto Raptors

The new NBA season is ever so close and the Raptors will enter the new campaign looking to build on the most successful season in team history. Easier said than done.

Coming off a season in which the Raptors were just two wins away from the NBA Finals, a variety of different factors led to the team’s success – from their impressive amount of depth, to their ability to play hard-nosed defense, and of course, their two cornerstone stars stepping up in Kyle Lowry and DeMar DeRozan.

The Toronto Raptors only averaged 102.7 points per game last season, a stat that had them in the middle of the pack tied with the Hornets for 13th in the NBA. Defensively, sat third in the league and first in the Eastern Conference allowing only 98.2 points from their opposition.

The most important stat for the Raptors was their net rating, or point differential, which was fifth in the NBA and second in the Conference at +4.5. A wise man once said that to win in sports, a team must score more points than the team its playing against. The Raptors did exactly that on their way to a franchise best 56-26 season. The one glaring deficiency on this Raptors team was their pace of play, which ranked them second last in the entire league, but at the same time, it was not surprising, judging by their isolation-heavy style of basketball, most notably with DeRozan on the court.

Now as a new season begins, the Raptors no longer have the likes of Bismack Biyombo, Luis Scola and fan favourite, James Johnson. Instead, the Raptors seemingly upgraded at the starting four positions with Jared Sullinger. DeRozan was re-signed to a long-term deal and the Raptors brought in two rookies named Pascal Siakam and Jakob Poeltl.

How can the Raptors replicate their success from a season ago? How can they build on it and how can they take the next big step? A big factor in doing so will hinge on the line-ups that Head Coach Dwane Casey will choose to roll with. He will need to find creative ways to increase the team’s offensive production, spread the floor for his two star players, while maintaining the team’s trademark defensive grit.

As we all well know, chemistry may be one of the most important aspects of sports. Most of the faces we will see come the season opener will be the same as we have seen close out the season in Game 6 of the Eastern Conference Finals in front of a sold out Air Canada Centre crowd. It is therefore fair to assume that the line-ups Casey will opt to use in the 2016-17 campaign will be eerily similar to those used of the past season. 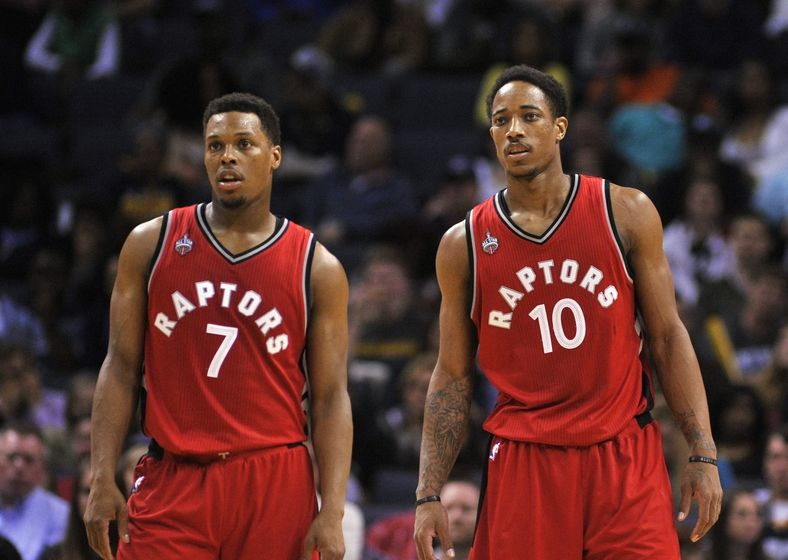 Now, this is where we come in. To help out Coach Casey, we will look at the productivity or lack thereof from all the possible combinations used in 2015-16 in an attempt to draw up a game plan for success in the forthcoming NBA season.

The big issue for the Raptors in the 2015-16 season was health. DeMarre Carroll was hobbled by a knee injury all season and missed a big chunk of time. Jonas Valanciunas sat out nearly a quarter of the season do to an arm injury as well.

Outliers aside, the most productive line-up the Raptors used had the now departed Bismack Biyombo at the five, Patrick Patterson and Terrence Ross spreading the floor at the wings, and Kyle Lowry and Cory Joseph dominating the basketball in a two-point guard offence. The Net rating in the 296 minutes of floor time was +18.5, which is incredible, but what made it work is most important. 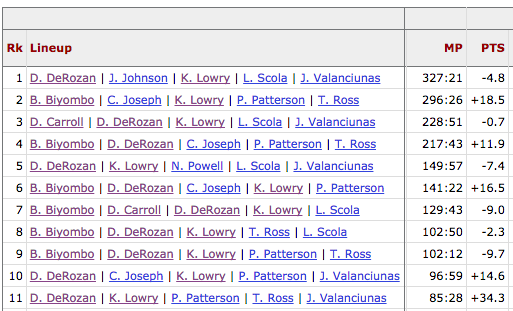 With the ball-dominating DeRozan on the bench, the Raptors were able to create spacing with Patterson and Ross, and with Joseph and Lowry handling the basketball there was far more slashing and fluid ball movement. Biyombo was never a player the defence paid much attention to, but that allowed him to secure offensive rebounds and allow second chances for his team. Defensively, having guys like Joseph, Patterson and Biyombo on the floor greatly increased defensive pressure and therefore it makes sense why the Raptors were able to dominate with this line-up.

What may be the most surprising part of this is that the Raptors used nine different line-ups last season for 100 or more minutes and this specific group of five was the only one with a positive assist rating at +5.7.

Time and time again we see teams winning games and carving up opposing defences by distributing the ball. Isolation basketball is a dying art and it is being substituted by offensive schemes that make scoring far easier than it ever has been. Shooting slumps begin and end with ball movement. There are only so many times that a professional basketball player can miss easy and good looks.

The Cavaliers tore up the Raptors by moving the basketball, finding the open shot in the Playoffs, the Warriors have notoriously blown away teams with their ball movement, finding the open man behind the three point line. The Spurs are another team that put on basketball clinics with their ability to move the ball. That’s the name of the game.

That being said, Cory Joseph and Kyle Lowry will again see a lot of floor time together in the upcoming season with the possibility of Jonas Valanciunas or even a Pascal Siakam taking the role of Biyombo in the paint.With Carroll out for the majority of the regular season, Casey and his coaching staff had to improvise when considering their starting line-up. For the most part, it was a failure as evident by the slow starts the Raptors have had in most of their games in Carroll’s absence.The starting line-up in the majority of regular season games and the most heavily used line-up was Jonas Valanciunas at the centre spot with Luis Scola and James Johnson rounding out the front court, and Lowry and DeRozan occupying the back court. Through 327 combined minutes played, the unit combined for a net rating of -4.8.Why did it not work? Lack of scoring or shooting options on the wing with Scola and Johnson, combined with the lack of spacing that the two provide and in turn, with the lack of spacing, DeRozan and Lowry were forced into playing more isolation ball. Of course, this also hurt Valanciunas’ production as he would not receive his touches nor have the necessary space to go to work when the ball was in his hands. Defensively, Scola was on his last leg and was a massive liability. 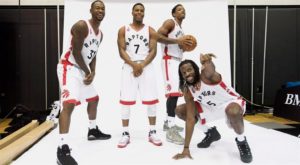 Why was this line-up used so often?

Apart from injuries, Terrence Ross’ inability to show vast improvement kept him on the bench. Norman Powell was not given a chance to sign till late in the season and finally too much loyalty assigned to the aging Luis Scola.

With both Johnson and Scola now gone, it seems that Carroll and newcomer Jared Sullinger will be taking their place in the starting rotation. A healthy Carroll will automatically make this team far better than it ever was, but Sullinger is a liability offensively. He is a below average shooter and cannot stretch the floor well. He is a fine addition, but as a floor spacer for the star players, the offence will suffer more than it will gain.

Aside from Carroll, Patrick Patterson will be a key member on this Raptors team. If Casey sees that a starting rotation with Sullinger does not work and Patterson finds his shooting form from two seasons ago, Patterson will grant the Raptors starts the ability to spread the floor, slash to the rim and give Valanciunas his touches in the paint.

In an ideal world Carroll remains healthy and Patterson returns to form. Valanciunas finally asserts himself as one of the game’s best big men and Sullinger finds a niche in the Raptors second unit led by one of the team’s unsung heroes, Cory Joseph.

Will at least one of the Raptor rookies give Casey solid minutes? Is Bruno Caboclo still two years away from being two years away? And finally will we finally see Terrence Ross reach his potential, or will Norman Powell force Ross into being one of the more premium trade chips in the league?

How can you not be excited for yet another season of Toronto Raptors basketball?