Can LeBron Ever Top his Royal Airness?

As the Cleveland Cavaliers training camp has gotten underway, LeBron James faced the same type of questions he hears every year on media day. Is it championship or bust? How can you get back to the NBA Finals? Are you still driving to be better than Kobe Bryant or Michael Jordan?

Long being mentioned in the same breath as the great Michael Jordan, LeBron never publically acknowledged his desire to be better. His name has been floated around the game’s greatest basketball player since his days in St. Vincent-St. Mary High School and as his 14th NBA season continues to creep up, the ghost of the former Chicago Bull, is still lurking in his shadows.

After a 13-NBA season, James has heard all the inquiries he could possibly have received and he has answered all of them as best and as professionaly as possible, but he has always shied away from the ultimate question. That all changed last Monday morning as the three-time NBA champ arrived to his team’s media day.

“It’s a personal goal,” said James to the media on Monday morning. “I just never brought it up. It’s my own personal goal to be able to be greater than great. I think that should be everybody’s personal goal”.

Of course the next challenge for James is one that he has faced before and that is to repeat as champion, but the greater goal is to best the best. You know you are great when you have feasible aspirations to reach that mountain, but as high as James sets his bar for the remainder of his storied NBA career, can LeBron really accomplish his ultimate goal?

Can LeBron James become the greatest basketball player to ever live when all is set and done?

Well, where to begin? Career accolades are a good start. 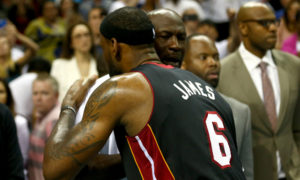 CHARLOTTE, NC – APRIL 28: LeBron James #6 of the Miami Heat hugs Michael Jordan after defeating the Charlotte Bobcats 109-98 in Game Four of the Eastern Conference Quarterfinals during the 2014 NBA Playoffs at Time Warner Cable Arena on April 28, 2014 in Charlotte, North Carolina. NOTE TO USER: User expressly acknowledges and agrees that, by downloading and or using this photograph, User is consenting to the terms and conditions of the Getty Images License Agreement. (Photo by Streeter Lecka/Getty Images) ORG XMIT: 485873297 ORIG FILE ID: 487235143

The glaring difference is LeBron’s Finals’ success. While Jordan finished his career going perfect in the NBA Finals, LeBron James has found success in only three of his appearances – seven attempts, three championships. Despite ESPN’s continued desire to eliminate his first Finals’ loss from humanity’s memory as LeBron’s roster was not up to par with that of the Spurs, it still counts and will always show up in the history books.

When we look at the rosters that both Jordan and LeBron had around them, Jordan always had the superior coach in Phil Jackson. Dennis Rodman was around, Scottie Pippen, Tony Kukoc. LeBron had the likes of Zydrunas Ilgauskas and Sasha Pavlovic in his first run to the top with Cleveland in what was an eventual sweep at the hands of the San Antonio Spurs. That followed by a run alongside Chris Bosh and Dwyane Wade, which earned LeBron his first two chips. The third came this past NBA season with the likes of Kevin Love, Kyrie Irving, and Canadian big man, Tristan Thompson on the roster.

Michael Jordan had his help and no doubt LeBron had his share. The fact that Jordan finished his life achieving NBA Finals perfection will always keep his resume more complete than that of LeBron’s.

The best win and they win whenever they get the chance to, and I realize that, but if we take away all the trophies, the awards, the personal achievements, which player is better in a vacuum?

Looking at each guy’s advanced stats, Jordan has the edge over LeBron in win shares (214 to 192.5), for value over replacement player; James has the edge (108.6 to 104.4). As for player efficiency rating, Jordan has the greatest mark in NBA history (27.9). Not surprisingly, James is right behind him at second all-time (27.7). Everything is almost identical!

As odd as it could be, while LeBron is constantly mentioned in the same sentence as Jordan, and he continues to chase Jordan’s greatness, LeBron and Jordan are completely different players and that may be the biggest issue when comparing the two. LeBron is the new-age Magic Johnson, who is chasing Jordan.

Like Johnson, LeBron is at his best when everyone on the court is involved. He has the best court vision in the entire NBA and is a floor general much like Johnson was for the ‘Showtime’ Lakers. Michael Jordan was a cold-blooded killer on the court – the guy who knocks down the big shots to put games on ice. LeBron has always been a different kind of animal, but efficient nevertheless.

That is not necessarily a bad thing. When you have NBA greats like LeBron and Jordan, you will never get carbon copies of each one. There are many Brian Scalabrines that play in the NBA every year, there has only been one LeBron James and one Michael Jordan.

Comparing playing styles is where the answer to the age-old question may lie. James uses his physique, strength and size to literally destroy the opposition. When you have LeBron running down the court, good luck stopping the tank that is James. His ability to get to the basket is second to none, and LeBron can do it at will. When he is double or triple-teamed, his court vision allows LeBron to make the passes that only James can to find the open man for the easy shot. 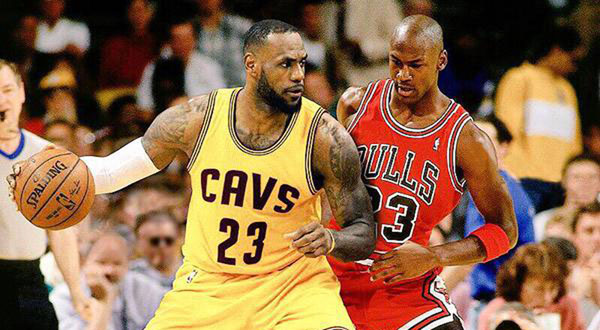 When all the attention is around James, Thompson can get all the rebounds he wants, Love can get his open three’s, the offence works with great fluidity just by having LeBron on the court. LeBron’s greatness is not only in what he can do on the floor, LeBron has the skill and talent to make every single player around him better.

Michael Jordan is a guy who you give the ball to when you need baskets to come in bunches. The three-pointer was never kind to either James nor Jordan, the free throw line hasn’t been their spot either for both guys, but for Jordan, he had the ability to embarrass his defenders. Like James, Jordan was a freak athlete, but unlike James who used his size to dominate, Jordan used purely his athleticism and skill to destroy his opposition.

The basketball IQ was off the charts for both guys despite LeBron having the possible edge in that category, but ultimately, their differences as players may be the main reason why LeBron can never become better than Jordan.

LeBron can always surpass Magic in terms of greatness, as they are similar players, with similar games. Jordan and James on the other hand are too different to compare either in a vacuum or based on resumes. LeBron will always dominate the game based on his playing style, while Jordan dominated basketball in the only way he knew he could.

After that, well it’s anybody’s call. If the only thing that makes Jordan better than James is his six-for-six Finals record then so be it, but that only discredits how great LeBron James has been since entering the NBA.

Cliché or cheesy as it may sound, LeBron may never be able to top James, he may never become the next Michael Jordan, but he can end his career being the first LeBron James, and that alone can assert him as the greatest NBA player of all time.