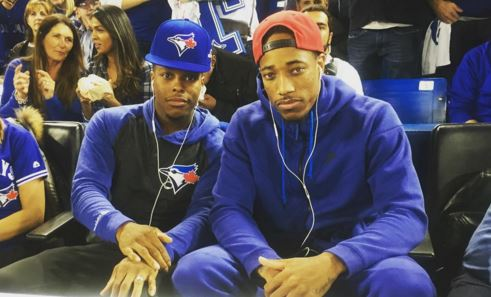 There is yet another sports buzz around the city – a common occurrence of Toronto over the past couple of years. Following many years of suffering, there is finally excitement in the 6ix!

After the Toronto Raptors took the Cleveland Cavaliers to a Game 6 in the NBA Eastern Conference Finals, the Toronto Blue Jays resumed their chase towards the MLB World Series. Falling just six wins short of the championships just a season ago, the Jays are back, up 1-0 in the ALDS over their rivals, the Texas Rangers after a nail-biting wildcard win over the Baltimore Orioles off an extra innings three-run homer from slugger, Edwin Encarnacion.

You better believe the Toronto Raptors are doing their part in cheering on their fellow Toronto athletes as they continue their uphill battle. The electricity in Toronto certainly is real and Raptors players know it.

New Raptor Jared Sullinger got in on the act quick. So did an array of other Raptors ranging from JYD 2.0, DeMarre Carroll, Kyle Lowry, and fan favourite, Norman Powell.

It is well known that Raptor stars Kyle Lowry and DeMar DeRozan are buddies with Blue Jays star, Marcus Stroman. You can bet they had his back as the Jays got their playoff run rolling on Tuesday night especially with ‘Stro’ himself on the mound in the do-or-die ballgame .

Speaking of JYD 2.0, Carroll was fully decked out when wishing support for the home-town Jays, rocking his Jays gear with pride. 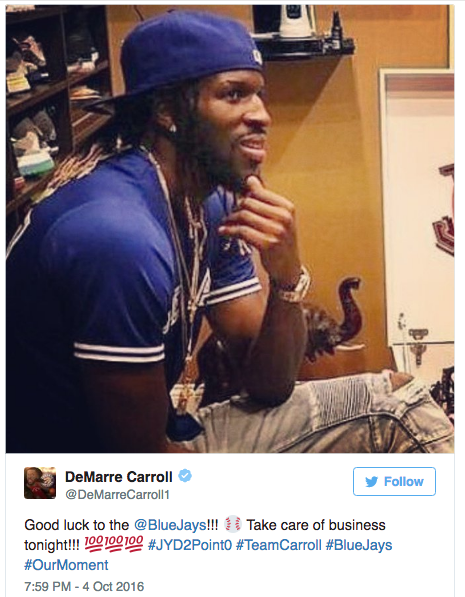 With NBA training camp underway, even the Raptors take every opportunity to follow the Jays, so in case you have been living under a rock for the past few days, it is time to turn some Blue Jays baseball and get on the band wagon before it’s too late.

Norman Powell definitely knows what’s up. It really is “Our Moment” and he and none of the Raptors are planning on missing out on it!