Who says the stars of the NBA don’t like themselves some World Series baseball? Seems like everyone is buying into the hype that the epic upcoming fall classic match-up will bring. The Chicago Cubs, a team starving for a championship for the past 108-years, while the Cleveland Indians haven’t hoisted the trophy since 1948.

Now as the two cursed franchise are set to meet on Tuesday for Game 1 of the World Series, a couple of NBA superstars are ready to stand behind their teams.

“We’re placing a nice bet and more on this one my friend!” responded King James shortly after.

The newly turned Indians fan, who used to rock Yankee hats has been at plenty Cleveland Indian games this season, has thrown out the first pitch, and has been seen rallying the city around the ball club whether at Progressive Field, or on Twitter. 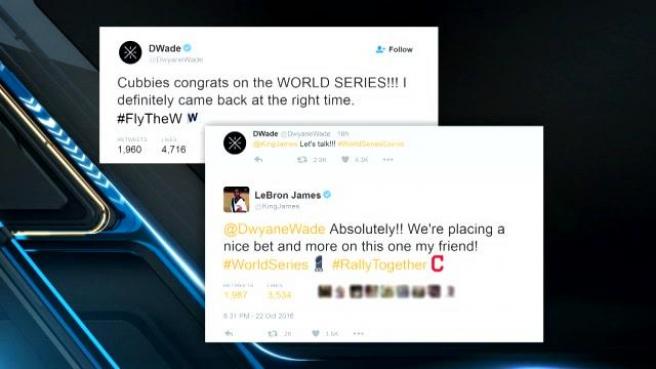 Seems like both men are going in on their teams in this historic match-up.

Who will prevail? The Cubs or the Indians? LeBron James or Dwyane Wade?