Bright Future Ahead for the Lakers 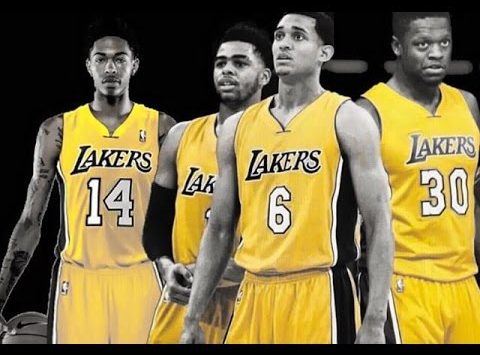 Young Lakers Making a Name for Themselves Around the Association

“It’s our annual beatdown by the Lakers at Staples,” said Steve Kerr in the aftermath of a lopsided 117-97 loss on Friday night.

The new Lakers have a very different look to them this year, one far different then the one of the past nearly two decades. There is no more Kobe Bryant; there are no more expectations or championship aspirations. The Phil Jackson days are long gone, and the remaining remnants of the Doctor Jerry Buss era are all but gone.

It started on the eve of the 2014 NBA Draft, where the Lakers selected Kentucky freshman big man, Julius Randle with the seventh overall pick. Later that night, the Lakers received the draft rights to the 46th pick, Jordan Clarkson via trade with the Washington Wizards.

This was the beginning. With no shot at even cracking a playoff spot and Kobe Bryant breaking down as he approached the finish line of his career, the Lakers began to secretly build for the post-Kobe era.

Why secretly? Well, because Kobe was still a box office attraction, a cash cow for the Lakers franchise, and the Lakers organization struck financial gold with him all the way through to the final day of his career where he dropped 60-points on the Utah Jazz. Behind the scenes, the roots have been planted.

Randle broke his leg early into the season and couldn’t play another minute in what was an injury-riddled year for the Lakers. Jordan Clarkson though, showed surprisingly a ton of promise, more so than what anyone would have expected from a mid-second round selection. Clarkson would earn All-Rookie First Team honours, as the then rookie showed incredible athletic ability, a projectable mid-range game, and a certain flare necessary for the bright lights of the Staples Centre.

That flare is what the new Lakers are. They are brash and cocky. Talented and driven to start a new chapter of greatness in Laker history, one filled with titles and championship banners being raised to the purple and gold filled ceiling.

In 2015, the Lakers had another high pick. The top two expected picks entering the night were Kentucky’s Karl-Anthony Town and the National Champions Duke’s, Jahlil Okafor. With the second overall pick, the Lakers decided to provide the NBA world with the first surprise of the evening, drafting Ohio State freshman guard, D’Angelo Russell, a kid who Jalen Rose infamously compared to none other than Magic Johnson.

Later in the first round, the Lakers acquired the rights to the 27th pick, Larry Nance Jr. and finally in 2016, the Lake-Show selected Brandon Ingram.

Lastly the Lakers need a head coach, one that would stand course and lead the young Lakers through the growing pains that would undoubtedly play a factor in the first few years of development. The Lakers found their man with former Laker and Golden State assistant coach, Luke Walton.

The seeds have been planted and after a few short years of hanging in desperate limbo as Kobe played out his career, there is excitement and a buzz around Laker fans as they begin to see the shining light at the end of the tunnel.

Watching the Lakers early, they are a fun team to watch, with a lot of the plays they run coming out of the Golden State Warriors playbook. There is exceptional ball movement; the Lakers have very nice versatility at every position, and the team itself plays with a certain swagger, uncommon for a club that realistically is not going to make the playoffs in the next year or two.

But really, it is just fresh to see. D’Angelo Russell primarily seems to have taken over as the leader of the team. Luol Deng’s signing has added a veteran voice in the locker room, and Metta World Peace being back only adds to that veteran mentorship.

Russell himself is the real deal and what he continues to show on and off the court especially after a rough end to his rookie season, is impressive to say the least. He is quietly becoming one of the best passing guards in the entire league, is showing the ability to slash to the rim, and shoot the three. Most importantly, he has a certain personality trait that separates him from many guys in the association. You could say he has that Kobe killer mentality edge when he plays. 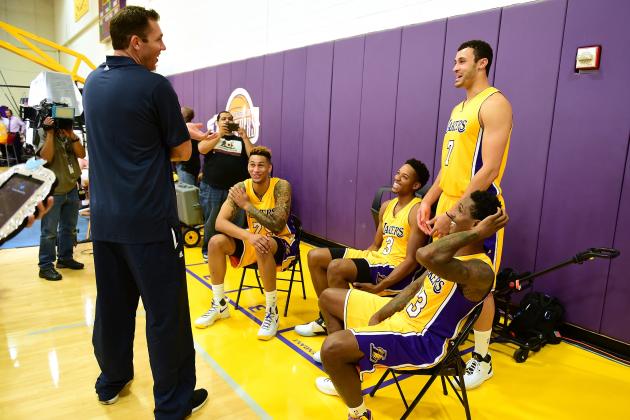 His backcourt mate who has accepted a bench role for the time being, Clarkson, is a stud in his own right. The athleticism is slightly reminiscent of a Russell Westbrook, but he plays with poise and maturity. He can either explode to the basket off the pick-n-roll, or create his own space for a consistent jumpshot.

Surprisingly, Randle has exceeded expectations playing as the non-ball handler in the pick-n-roll offence along with Clarkson. He has very impressive size and really great versatility. He is becoming a very good passer for his size and is starting to develop a mid-range game, something that he will desperately need living in an offence with high energy and electric guard play.

But it is not Russell, Clarkson, or Randle whose play has been the most vital to how this Lakers team ticks. It hasn’t been Lou Williams or Swaggy P who have been the backbone to their offensive and defensive sets. It seems like the most undervalued player, or even the forgotten guy, is Larry Nance Jr.

Now, there is reason to understand why that is. He’s not going to fill up the stat sheet or go off for a ton of points. Hell, the sophomore forward is only averaging eight-points off the bench through the first six games. But what he does is all the dirty work. He is what starts the plays, be it on defence or on offence. Nance is the guy who sets the correct screen, makes the right pass, the key defensive switch or play to create opportunities for his Lakers teammates.

Yes, the season is young, but in the top three most used line-ups thus far by Walton with Nance on the floor, the Lakers have a net rating per 100 possessions of +117.2 – in 42:49 minutes of floor time! That is a ridiculous mark and if you watched these top three lines, you’ll understand exactly why Nance is just so vital to the Lakers current and future success.

With the abundance of talent the Lakers possess, the Lakers must understand that there is no need to rush the development process. Luke Walton seems to be the right coach for this roster and has already established a new culture in the locker room. What comes next is watching this team’s core grow into stars. Lastly, probably the best player on the Lakers is one who has just started his development in the NBA. Brandon Ingram, the long guard out of Duke. Ingram is a capable scorer, with NBA-ready shooting range, and the length to be a top defender in the league.

Randle, Russell, Clarkson, Nance, and Ingram are the future of this team, and if cell phones are kept away from Russell specifically, there is no reason to think that more success isn’t in the Lakers future!