Have the Clippers Finally Taken the Next Step?

In case you haven’t yet noticed, the Los Angeles Clippers are steam rolling past teams.

So much so that Steve Balmer’s team is currently leading the league in point differential per game at 16.85 points. The second closest team are the Atlanta Hawks who are at 9.35 points.

A pretty hefty difference to say the least. So far it’s been every team in the NBA and then there is the Los Angeles Clippers who are currently in a league of their own.

After yet another lopsided victory last night, 111-80 over the Portland Trailblazers to be more exact, the Clippers grabbed sole possession of first place in the entire NBA at 7-1. Their sole loss came at the hands of the Oklahoma City Thunder on a night in which Russell Westbrook just did Russell Westbrook type of stuff giving his team a slim two-point win.

Looking at the Clipper’s winning column, they have loaded it up with six double-digit victories, the last three of which coming by 20-plus point margins, the last two being 32-and 31-point blowouts.

One of these three blowout victims were the San Antonio Spurs. On the second half of a back-to-back, the Clippers arrived to San Antonio and annihilated the storied franchise on the Spurs home floor by a score of 116-92. Now that is impressive.

So the question that could be asked at this point in time is – are the Clippers for real? Can they be finally considered as real players for the NBA Championship?

Of course, they are off to a great start, but with five months of the season left to be played, there is no need to extrapolate and overreact to this string of blow outs. You cannot definitively say that this a team that will finally make it to Chris Paul’s first ever Conference Finals, or that this is the same team we see every year, one that always falls short of taking the next step.

Since the turn of the century, there have only been two teams to not qualify for a Conference Finals berth. One is the already mentioned Clippers, the other are the New Orleans Pelicans. Every other team has made at least one appearance in the final four.

What do the Clippers and Pelicans have in common? Chris Paul has played for both franchises. 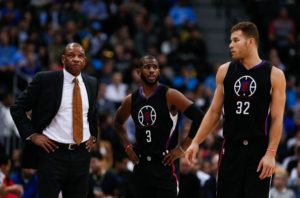 But so far so good, as Chris Paul looks to be leading his team to something unprecedented. Again, I do warn you it has been a very minuscule sample size, and for the past few seasons the Clippers have had these spurts of utter invincibility followed by head-scratching droughts of unimpressive basketball.

That being said, what the Clippers have so far accomplished should be worth taking note. They have looked impressive and in ways that are different from years past.

Doc Rivers is a premier coach in this league, Chris Paul is a perennial superstar, DeAndre Jordan is one of the best defensive anchors in the league, and Blake Griffin is a star in his own right. What the Clippers have consistently been lacking is defensive toughness and a bench that does not start and end with Jamal Crawford.

Starting with the second unit, Rivers finally has options. He has versatility, he has scoring, and he has a defensive edge; players who can stretch the floor as well. Crawford will continue to be Crawford, but the duo of Austin Rivers and Raymond Felton are giving the Clippers great ball-handling and distributing guard-play off the pine and the signing of Mareese Speights has finally given the Clippers a reliable big off the bench.

The Clippers bench, a sore weakness with each season, is currently fifth in the entire association in points at 40.8 per game clip – a number that will most definitely do for a team with as much starting fire power as the Clippers have at their disposal.

Overall team defense was another caveat for the Clippers. With a oft-struggling bench, the Clippers were unable to pull out games with the strength of their starting five alone as the defence just could not hold up. The Clippers team of 2016/17 is a far different one, currently sitting first in the entire league at points allowed at only 88.2 a game.

Who are these guys?

This is no ordinary feat. Sample sizes will always be blown out of proportion, even by myself, but the Clippers have so far faced teams like the Thunder and Spurs, even the Blazers and Suns – two teams not nearly near amongst the NBA elite, but nevertheless two clubs with very high-powered guard play and offensive brilliance.

The Clippers have shut all these teams down and with each game continue to look better and better.

One thing that may also be given far less attention is the overall vibe of this team as a unit. Keep in mind, this is a team that has faced never-ending media drama all through the duration of last season. First with Paul and Jordan not being on the same page, then with Griffin and his scuffle with the team’s equipment manager that left Griffin’s arm fractured. There was even talk of the possibility of trading Blake Griffin.

There is none of that this year and major kudos to the veteran leaders of the team and Doc Rivers himself for staying level-headed and keeping the team focused on the true goal.

Blake Griffin specifically has returned with a vengeance, playing like we’ve never seen before. There are so many added dimensions to his game now, it’s rather incredible. His ability to handle the ball for his size, his ability to distribute the ball as well is remarkable. He has sharpened his mid-range game and is a beast on the offensive end. 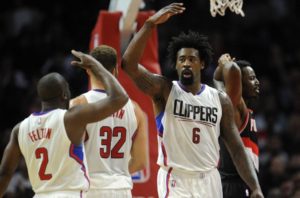 It may be hard to believe at this point, but this team looks poised to make a lot of noise in the basketball world this year. Who knows, maybe Paul Pierce can give this team something as well when he is ready to return from his ankle injury, if anything at all, another veteran and a guy who can spread the floor and hit the clutch shot in crunch time.

You gotta believe that this is the final ride for this Clipper team. I mean, what else can be done to put them over the top in a salary cap sport? If this is how their last shot at the top has begun, maybe there is reason to feel optimism?

Could this be the year?