James and Duncan in the News Again

On a more or less quiet day in the NBA, a few names still made some noise in the NBA news world. One of them was LeBron James, who let’s be honest, is always is the news. The second was the recently retired, Tim Duncan.

On the James front, just a day after the drama surrounding him and Phil Jackson, LeBron added to his constantly growing philanthropic track record when it was announced that he, his business partner, Maverick Carter and his charity foundation will donate $2.5-million towards a brand new exhibit about Muhammad Ali at the recently opened Smithsonian National Museum of African American History and Culture in Washington.

“Muhammad Ali is such a cornerstone of me as an athlete because of what he represented not only in the ring as a champion but more outside the ring — what he stood for, what he spoke for, his demeanour,” Said James when answering questions on his latest philanthropic venture.

It is becoming increasingly harder to hate Cleveland Cavaliers superstar. On the floor, fans witness all-time greatness on a nightly basis, while what James continues to do off the court may far exceed his playing resume and what makes James such a power figure in the world. 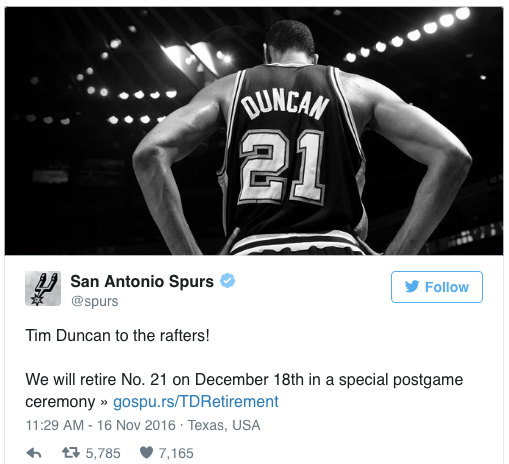 Speaking of greatness, the San Antonio Spurs are not wasting much time in celebrating the career of their franchise’s best, Tim Duncan. On Wednesday morning, the organization announced that the life-long Spur will see his jersey retired on December 18, on the night in which the Spurs play host to the New Orleans Pelicans.

Duncan’s number 21 will be sent up to the rafters, joining the likes of “the Admiral” David Robinson, “the Iceman” George Gervin, and defensive specialist and longtime Spur, Bruce Bowen. Duncan, who retired this past July after 19-NBA seasons will undoubtedly be a first-ballot lock once he is eligible for Hall of Fame voting in 2021.

The ‘Big Fundamental’ retired as the Spurs all-time leader in points (29,496), rebounds (15,091), blocked shots (3,020), minutes (47,368), and games played (1,392), while ranking third in assists. Duncan also finished his storied NBA career sixth in rebounding and 14th in scoring and will unquestionably be remembered as the greatest power forward to ever play the game.

And now, the greatest power forward of all time will be celebrated.