LeBron James on the Football Field? 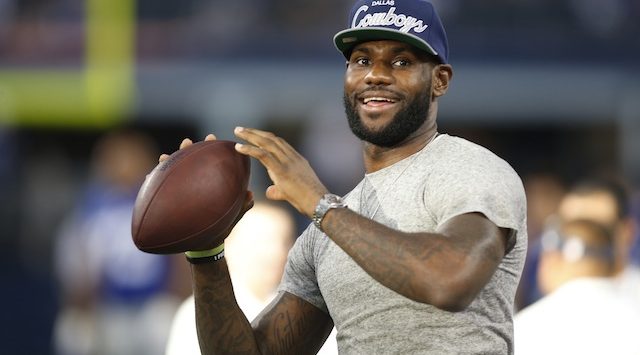 Will We Ever Seen LeBron Suit up for a Football Game?

On a well deserved day off, LeBron James and a few of his Cleveland Cavalier buddies took some time out of their busy schedules to check out the most heated rivalry in NCAA Football. The Michigan Wolverines took on the Ohio State Buckeyes in what turned into an overtime thriller, which was ultimately won by the Bucks.

LeBron seemed to enjoy the football game, but he also tossed the idea of him suiting up the Buckeyes, at least for a couple of snaps. His logic was sound too – James should be eligible to play in the NCAA since he has never gone to college.

“I’m trying to play snaps for the Ohio State Buckeyes. Straight Up. Get it!”

LeBron is not new to football, the Cavaliers superstar has played throughout his teen and high school years, and is built as a tight end or a corner back, who just so happens to be an NBA player.

Hell, put LeBron in a game behind the Ohio State front seven as a running back, and it will not be too hard to imagine LeBron getting some positive yardage, maybe even a first down!

Whether we ever see LeBron play a snap of football is still highly unlikely, but one thing is for sure – it will be the most heart-wrenching snap for any Cleveland Cavalier fan, player, executive, or NBA referee to watch.