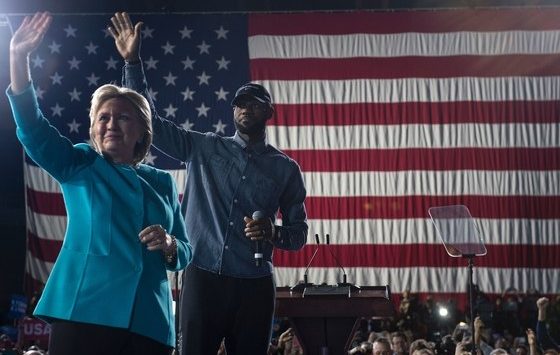 The NBA world is still very much abuzz with Donald Trump being elected as the 45th president of the United States of America. After many NBA players took to Twitter to voice their displeasure with the 2016 election results, a couple of NBA head coaches held nothing back in front of the media as they denounced Trump’s presidency.

Detroit Pistons’ coach, Stan Van Gundy was the first to make a stance. Van Gundy, one who is never shy at voicing his opinion was irate, calling out the next president of the United States for being “brazenly racist and [a] misogynist” and criticizing the portion of the electorate for voting for the republican nominee, Donald Trump.

Van Gundy’s near five-minute rant got mixed results via social media, not that the often daring head coach expected anything less.

Van Gundy was not the only head coach who decided to take a stance on the issue. Just a few hours later, Golden State Warriors coach, Steve Kerr did the same. 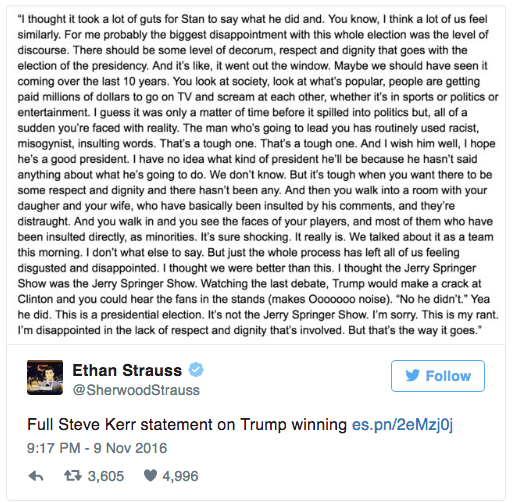 At one point, Kerr compared the elections to an episode of the Jerry Springer Show, claiming Trump is a man who “has routinely used racist, misogynist, insulting words”.

Coaches were not the only two people to get riled up by the election results. Players around the association voiced their opinions on social media minutes after the results came in and to say the least, there weren’t many happy people on social media last night. 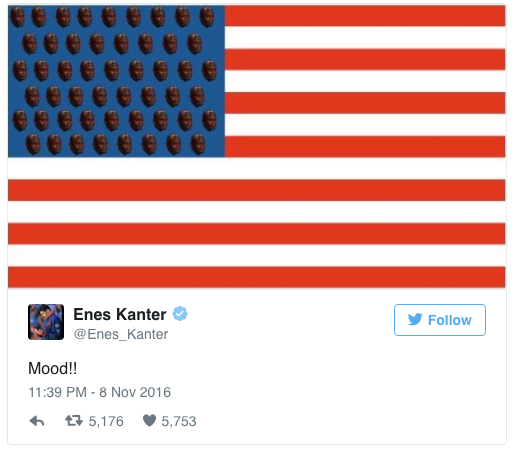 Enes Kanter was clearly in no mood at the end of the night.

Meanwhile, DeMarcus Cousins summed up the election results and quite possibly his entire career in Sacramento in one emoji.

Other NBA Stars like Joakim Noah and Ricky Rubio voiced their opinion on the results as well.

At a time when the NBA world is seemingly feeling slightly down over election night, only Joel Embiid can lighten the mood a little bit!