So far so good for the Toronto Raptors and why shouldn’t it be?

With all the media hoopla around the new-look Boston Celtics and the talk of the Indiana Pacers being the team that will pose the biggest threat to the Cleveland Cavaliers, it has been the Raptors who through the first few weeks of the season have quietly continued being one of the better teams in the NBA. The Raptors are in the top-10 in points allowed per game (99.2) as well as in the top-10 in point differential per game (+6.1). Now at 7-2 and tied in second in the Eastern Conference with the Atlanta Hawks, you could say everything is running smoothly and according to plan in the 6ix.

In Toronto, all the talk has been centred around DeMar DeRozan and rightfully so. The veteran guard is currently leading the association with 34.0 points per game and has scored 30-or more points in eight of the team’s nine games. DeMar has been on a tear all season thus far and at an efficient clip too – 52.8% from the field. The work ethic of DeRozan has never been questioned, but DeMar has taken his game to new heights this season, showing an unstoppable game from mid-range, forcing the opposition to fear him whenever he steps off the three-point line.

Apart from DeRozan, the Raptors have been consistently getting team efforts with different names stepping up each night to help the Raps pull out victories and of course, the defence has been solid more often than not. Be it Norman Powell (19-points, five-rebounds) or Bebe Nogueira (six-points, 10-rebounds, three-steals, five-blocks off the bench) in their Huskies throwback win against the Knicks or Kyle Lowry (19-points, eight-rebounds, six-assists) and Cory Joseph (12-points, four-rebounds) against the Charlotte Hornets. 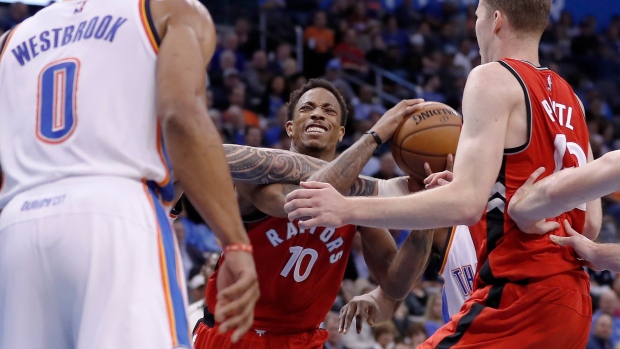 After a slow start for the supporting cast, Head Coach Dwane Casey is finding ways of getting all the depth that the Raptors have involved for not only keeping his guys healthy and effective, but to continue winning in the process. Terrence Ross has shed some weight upon coming into the season and has been as aggressive as we have ever seen, while shooting at a nearly 50% pace from the field. He has been explosive, his athleticism has not withered, and has found a unique ability to use his slashing skills and athletic ability to draw attention and find the open man. That same athletic ability, Ross has been able to apply on the other side of the court as well.

Speaking of Coach Casey, he continues to do a phenomenal job in finding ways of giving guys like Jonas Valanciunas and DeMarre Carroll his rest, and continue to plug in different names into different roles. While on the Raptors most of the attention is usually on the trio of JV, Lowry, and DeRozan, the effectiveness of the supporting cast has been just as impressive.

Offensively, the Raptors do need much more from Patrick Patterson in terms of the shooting he provides. 31% from the field does not cut it, but with Bismack Biyombo now gone, Patterson’s work on the defensive end continues to be under-appreciated especially when often times he is the team’s anchor on defence. He brings intensity, lateral quickness, and can box out his guys in the paint, as well as step out and defend wing players.

Surprising Lucas Nogueira has finally come into his own. As a coach the thing you can love the most is having a team that puts in the work that it takes to win and when your two leaders in Lowry and DeRozan put in the work and it trickles all the way down to the Nogueiras and the Powells, you must be happy. Bebe credited a change in his diet, dropping his drinking habit as something that has motivated his growth into a valuable member on the Raptors roster and he has been all over the court in the early part of this season and rightfully deserves all the credit for that.

As the Raptors start a new week, the road gets slightly tougher as DeMar DeRozan and company are getting set to visit the NBA champion Cavaliers in LeBron James’ house before returning home to welcome the Golden State Warriors. Afterwards, the Raptors begin a rough five-game road stretch, which includes the NBA’s best team, the Los Angeles Clippers.

The next seven games will say a lot about the Raptors and this team should be very excited for their next challenge!