The Good and Bad of Week One of the Regular Season

If you are a Toronto Raptor fan and you look at the results of the first week of the regular season, how can you not be pleased with how the team has started its year off?

They beat the two teams they should be able to beat and they duked it out with the defending NBA champion Cleveland Cavaliers. If one shot went the Raptors way, and one shot didn’t go the Cavs way, the game would have seen a different result. Either way, there is no need for concern in the slightest.

Sitting pretty at 2-1, the Raptors are set to visit a team that swept them just a couple of seasons ago in the playoffs, but at the same time, a team that is now trending in the complete opposite direction. With the Washington Wizards next on the schedule, let’s take a look at the good and the bad from week one of the Raptors season.

Of course we cannot read in too deep as the sample size is tiny, but at the same time, we can nit pick a few things because why not?

First and foremost, how great has DeMar DeRozan been so far? Dude has been flat out balling and putting in work!

After receiving a big long-term contract, there were continued doubts on whether DeRozan can be that star to take a team like the Raptors to the next level. Of course, the jury is still out, but through three games he has been ridiculously good. 40-points in the season opener, another 32-points against the Cavs and finally DeMar dropped 33 in a win against the Denver Nuggets this past Monday night. Most importantly, he has been efficient so far this year, shooting at a 54% clip from the field and has only missed two of his 23-free throws.

He has been the leader that the Raptors have expected him to be. He has been aggressive; he continues to draw a ton of contact, attacks the paint and the opposition’s defence, and continues to make a living from the mid-range. The three-point shot is again not there, but that may be something that Raptor fans will need to accept.

Other than DeRozan, Kyle Lowry has been getting back into form with each game, coming up big on Monday with a 29-point, seven assist performance, and Jonas Valanciunas has shown signs of dominance and has been getting his touches (between 12-15 shots per game).

The issue so far for the Raptors has been everyone else. DeMar DeRozan will not average 35-points per game from here on out and the Raptors stars will need offensive support from the rest of the crew. The defence has been solid, even in the absence of Bismack Biyombo, but the team needs more offensively. Patrick Patterson needs to be better, it is about time for Terrence Ross to start doing more, DeMarre Carroll needs to contribute, and Cory Joseph needs to provide just a little more of an offensive punch. 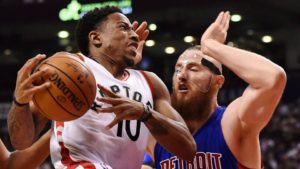 But if they want to do it in an NBA playoff series, there is still a glaring problem in the way the Raptors run their offence and it can and quite possibly will come back to bite them when it matters most.

The lack of ball movement, the amount of stalling, shot-clock killing has been destroying their offensive flow. Against the Pistons, the Raptors moved the ball well, they attacked Detroit and found open looks and blew them off their home floor. First half against the Nuggets was much of the same, but too often the Raptors revert back to dribbling too much. Holding the ball, almost playing kill the clock, only they are killing it far too early in the game. They have shown the inability to consistently play a style of basketball that wins playoff games. Yes, right now it doesn’t matter much because based on talent alone they can beat nearly any team that comes their way, but when there are eight teams remaining, or four, or maybe even two. This team needs to learn how to execute better. Low percentage shots are not the way to do. Not only does force you to score less, it doesn’t even tire out the opposition. Everyone is in a standstill waiting for DeRozan to attack or pull up a shot. Everyone is waiting for Lowry to start a play with seven seconds left on the shot clock. That is not the way to get it done in playoff time.

The regular season should be live game practice for the playoffs and it must improve.

The Nuggets fought their way back into the game, but the Raptors were able to escape primarily due to the heroics of Kyle Lowry and DeMar DeRozan. But in those clutch moments, we saw a disastrous lack of ball movement, too much isolation, and a ton of tough shots being thrown up, most notably by Lowry late from the elbow with the shot clock ticking ever closer to zero. Put it this way, in the playoffs you will not have Emmanuel Mudiays coming out you. It will be the Paul Georges, the LeBron James’ and the Raptors must be ready for that.

But hey, other than that, no need to panic. The Raptors are a great basketball team and unless everything humanly possible goes wrong they will comfortably make the playoffs. By anything humanly possible I mean something along the lines of DeRozan getting kidnapped, so as you can tell, very unlikely. It is clear on what the Raptors need to improve on, the only question that remains is will they, or does the personnel on the team, primarily a guy like DeRozan cannot excel in a faster paced style of offence that moves the ball more efficiently?

Essentially the same roster is back from their Eastern Conference Finals team, the challenge now for Dwane Casey is how to propel his team past LeBron James. Whether they can do it or not, the answer may start with improved ball movement.