From Cameroon to the NBA

Welcome to the first edition of ‘Rookies Digest’, a platform that provides you with exclusive access inside the everyday life of NBA rookies as they commence the path of transitioning from college into the NBA.

Go behind the scenes, and get to know the personalities and the talent that is still a hidden gem on the professional level. Get to know not only the grind that it takes for rookies to get opportunities, but the amount of work that it takes to maintain consist minutes and remain in an NBA rotation.

Pascal Siakam, a Cameroonian-born 6’9” power forward, spent his college career playing for New Mexico State University, an under-the-radar school, one that does not see a lot of hype or exposure on the NCAA Basketball level. The perfect match for the just as under-the-radar prospect that is Siakam, a high-motor kid who excelled in his sophomore year in the program, averaging 20-points and 12-rebounds on 54% shooting.

Forgoing his final two years of eligibility, Siakam declared for the 2016 NBA Draft and it paid off as he was selected 27th overall in the first round by the Toronto Raptors, a team with a whole to filled in its size department.

Despite his thin frame, Siakam is an above average defender and rim protector. He is a great athlete with great work ethic and the ability to run up and down the floor incredibly well for a big man. As he continues to fill out his projectable frame, there is a lot of promise for the 22-year old as he has a strong foundation and has improved his game exceptionally with each year. 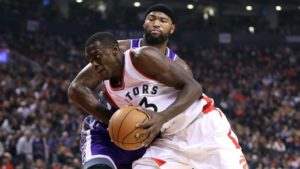 As a player who has worked his way from the humble beginnings of life in Cameroon, to being red-shirted in his freshman year to realizing his dream of stepping foot on an NBA court in a Toronto Raptors uniform, Pascal Siakam is very deserving of BallnRoll’s first edition of ‘Rookies Digest’.

BallnRoll: NBA players are highly competitive by nature; does not playing many minutes affect you?

Siakam: No, I mean a lot of people, a lot of rookies are used to the situation that I am in; be able to be on the floor and help your team win. Definitely can’t complain about that, I’m blessed, and I’m just excited because every minute means more, you know, that’s all it means.

BallnRoll: You knew there was going to be a transition period between college and the NBA. Coaches, mentors, players probably all have told you about it so what has it been like?

Siakam: I mean, I knew that; I knew that when you come to the league where everyone’s good and you’re going to find people who are established in the league – that have been playing there for a long time. So it’s not going to be easy and be like it was in college and I knew that coming in and I was just ready to grind and work hard to get to that level to where that I can look back and say I am one of those guys in the league.

BallnRoll: What do you do mentally to be ready when your name is called?

BallnRoll: As a rookie, what has been the hardest thing to get used to or has it been totally heaven?

Siakam: It’s been hard; it’s a different game. The physicality, people are mentally more mature. It’s a man’s game, you know. Everyone is good. Everyone in the league is good, so it’s not like you’re going to see people that are not good like in college like some people are not good, and I mean everyone’s good and you have the top of the top every night.

BallnRoll: It seems like your motor is running at 10,000 rpm all the time, is that how you figured out how to be different among all these great players around you?