Uncommon Path to Realize a Dream

In BallnRoll’s second instalment of rookies digest, we take a closer look at the ninth overall pick, Jakob Poeltl, the Austrian-born big man, who spent his college career in Utah.

The 7’1”, 240 pound centre excelled in his time in Utah turning into one of the NBA’s breakout prospects in his freshman season, which included leading his school to the Sweet Sixteen. Opting to return to school for his sophomore year over entering the draft, Poeltl’s calculated risk paid off as he emerged as the most productive big man in the country, winning Pac-12 Player of the Year honours while averaging 17.3-points and 9.1-boards per contest, ultimately solidifying himself as a potential top-10 pick in the 2016 NBA Draft.

Entering the draft, Poeltl was lauded for his incredible footwork and high work ethic. He undoubtedly entered the draft with the best back-to-the-basket game. Defensively, he offers above average shot-blocking, has good instincts and great timing to protect the rim effectively. 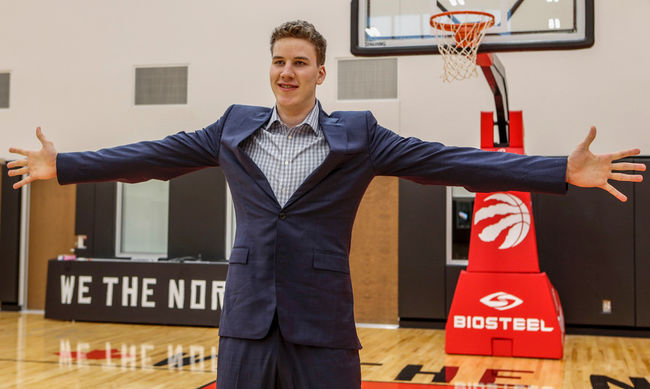 Selected by the Toronto Raptors, the uncommon journey to the NBA for Poeltl was finally complete. The first ever Austrian-born NBA player would get his first taste of the league with a conference finals team, looking to compete for a championship. Now the real grind begins for Poeltl as he fights to make the most of his NBA opportunities.

BallnRoll: You have the best job in the world, but being so competitive, does not playing as many minutes affect you mentally?

Jakob: No, I don’t think so, I mean obviously I want to be out there, but it’s something that being drafted by a conference finals team is like. You got to expect as a rookie there will be times you won’t play at all, there will be times you will play very limited minutes so I wouldn’t say it affects me mentally. You know I want to be out there, I’m doing everything I can in practice to try and show everybody and the coaches that I can be out there, but I don’t think it affects me.

BallnRoll: College to NBA transition is a different ball game now. What has it been like?

Jakob: I mean yeah, everybody tells you that the question is how you actually take it when it happens. It’s not an easy thing to do. To live with that when all your life you have been a good player on your team and played a lot of minutes and all of a sudden you are the last guy, at the back of the pecking order and you got to learn how to live with that and improve as a basketball player anyway.

BallnRoll: What do you do mentally to be ready?

BallnRoll: Being a rookie, what’s the hardest thing to adapt to in the NBA or has it been all heaven?

Jakob: Well, there have obviously been a lot of things you actually have to adapt to. Although it’s the same game, there are so many different aspects to it all of a sudden with different rules, different play styles, added physicality and pace to it. The referees – the officials – they call the game differently than in college, and that’s all little stuff that make an impact in the game itself.

BallnRoll: Have you been home since being drafted to the Raptors?

BallnRoll: I’m sure in college you have had a certain celebrity status as it is, but now it must be crazy.

Jakob: I’m for Austria; it’s crazy, you see the thing is basketball is not very popular in Austria. Obviously, soccer and skiing are like the big sports. It’s getting better, there are more people becoming interested, but still it’s not like I’m known everywhere in the streets, it’s still pretty mellow I’d say.