The Revival of the Big Man

Porzingis and Embiid Quietly Making a Name for Themselves

What happened to the storied NBA big man? Every generation in the NBA was dominated by great, legendary centres. Be it Wilt Chamberlain and Bill Russell in the ’60s, Shaq, the Admiral David Robinson, or even Yao Ming at the turn of the century. Or even the original big men like George Mikan or Bob Pettit. The NBA landscape has undoubtedly changed, some could say for the best, others could stay for the worst. The game is faster, more athletic, and ever-changing, but why is the big man position not being dominated? Why has the NBA continued to change with the time, but left the centre position behind?

Maybe it has to do with the booming influx of guards in the league today. Russell Westbrook, James Harden, Kyrie Irving, Steph Curry are superstars. The next tier of guards with Isaiah Thomas, Kyle Lowry, John Wall, and Kemba Walker and the consistent growing number of ball-handling, high energy guards with star potential that enter the league each year. From D’Angelo Russell, to Devin Booker, to Emmanuel Mudiay.

When NCAA March Madness brackets are made, what do analysts always say? Not to focus on the team with the great college big man, but focus on the team with the electric, high-powered guard play. In 2016, we saw the heroics of UNC’s Marcus Paige and Villanova’s Kris Jenkins. In 2015, we saw Duke’s Tyus Jones light up Wisconsin in the NCAA Final. Kentucky is undefeated, but look at the guard play that they provide with Tyler Ulis and Jamal Murray, putting the budding talent of Karl-Anthony Towns on the back-burner.

But what if I was to tell you that maybe the big man is seeing a revival. Maybe it would help Shaq sleep far more peacefully at night.You can make a case that Anthony Davis and DeMarcus Cousins are the best two big men in basketball. DeAndre Jordan is quite possibly the best defensive center in the game, and Karl-Anthony Towns is a superstar in the making, but where does the continuity come from?

It seems like the NBA is a mass-producing factory for guards. Can it make a 6’10” and up category in their multi-billion dollar empire? If anything, for the sake of all the former great centres begging for a rejuvenation in the position. 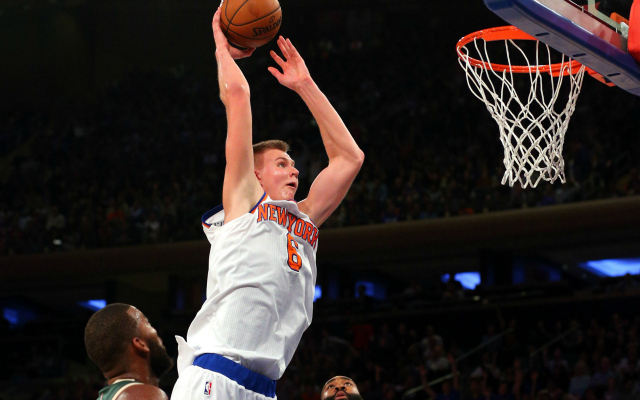 Now, these great former bigs can see a revival right in front of their eyes and the continuity to keep it going long-term. The hype around Towns is well deserved, but there are two other big men making a case for themselves, but are being overshadowed early on in the season. After an incredible rookie campaign, Kristaps Porzingis has upped his game, taking it to new heights, while Joel Embiid has finally stepped onto an NBA court and right from game one has shown what the Sixers have seen in him just three years ago in his final season as a Kansas Jayhawk.

Granted there is reasons why either of the two are not getting the love they deserve. The Knicks are 5-7 after acquiring “super team” talent and Phil Jackson is in the news for all of the wrong reasons. Meanwhile, the Philadelphia Sixers are even worse, once again competing for the number one overall pick in the 2017 draft.

For the Knicks, Porzingis is averaging 20-points and seven-boards through the team’s first 12-games, on nearly 50% shooting from the field. Porzingis has been one of the very few bright spots for the Knicks thus far and while the main focus may be on Derrick Rose and Carmelo Anthony, Porzingis is the future. Watching film on Porzingis you must realize that him being 7’3” makes what he does look even more impressive.

Coming into the league, Porzingis already was an elite offensive rebounder, a kid with great instincts and even better timing and athletic ability. That same athletic ability allows him to run the floor extremely well for a big man and finish at the rim while keeping his head up the entire time. Despite the lack of muscle size, he provides toughness, the work ethic and is always a player that must be accounted for when a shot goes up.

What is remarkable about Porzingis and most of the new-age big man is they can handle the basketball. They are no longer big massive robots who get into post position and wait for a ball to be thrown to them. Porzingis has the ability to create his own shot off the dribble or spot up from mid-range or even from behind the three-point line.

Moving over to Joel Embiid, he is slightly a different kind of talent. The Kansas standout finally got his chance to show off his skills after two-years of leg injuries, Embiid is averaging 17-points and eight-rebounds along with just over two-blocks per contest. Similar to Porzingis, the self-proclaimed ‘The Process’ has some impressive three-point range and ball handling ability as well.

If he can remain healthy, which is the million dollar question, Embiid is on his way to an easy Rookie of the Year award win and maybe even NBA superstardom.

Analyzing his game, it’s easy to see the fluidity in his movements. He is built like a brick wall and is very mobile, especially for a guy with a whole boatload of leg problems. Defensively, he has long arms, exceptional basketball IQ for his age, and understands how to defend a man one pass away, even if he has to quickly step out to close space and affect three-point shots.

Where he is different from Porzingis, and what ultimately will make Embiid special, is his post moves. With his strength, we have seen Embiid bully even veteran big men early on in the season, and with his Hakeem Olajuwon-like post game, he will only get better as he polishes up his approaches and slows the game down once he has interior position.

Essentially with Porzingis and Embiid, you have two superstar potential, high upside big men who are additional blocks to the NBA project known as reviving the big man. The position is far different than it was in any other decade and maybe that is the main reason as to why it took so long to change with the time. The prototypical back-the-basket centre with bruising strength may be gone, but what we are seeing now are versatile big men with many dimensions to their games, which with their size can accelerate their growth to stardom.

It is hard to believe how good both Porzingis and Embiid are at such an early age and while Karl-Anthony Towns is getting most of the attention, these two bigs may not be too far behind. They have the skill necessary to succeed, even the personalities and swagger to become superstars.

All that is left is to trust the process and except brilliance in the future!