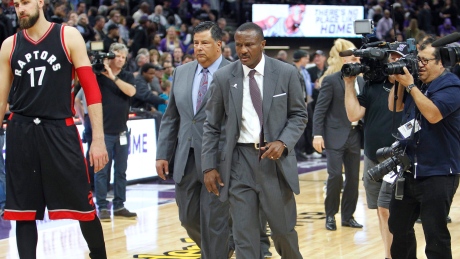 I don’t know what was more shocking.

Terrence Ross’ buzzer beater three being waved off because the concept of time was reviewed by NBA officials or Goldberg beating Brock Lesnar at WWE Survivor Series main event in under two minutes – according to Twitter, that was apparently rather crazy and groundbreaking  as well.

Apparently, according to NBA official rules, the refs had to take the concept of time into consideration. So by opening up a parallel universe via video replay, they were able to determine that Ross’ shot would have not counted if the Sacramento Kings time keeper did not screw up the one job he had to do. Not to mention that all the officials on the court can start the clock with the help of a button as well and they failed to do so as well in real time.

Thankfully, the replay centre had the real time and for some reason, the real time was not being used in the official NBA game, which I guess is pretty cool and makes perfect sense.

After the 2002 NBA Playoffs, I guess the NBA did owe the Kings one.

Think last night was weird? Because it is, but it’s not the weirdest the NBA can get because here are five other bizarre NBA rules that make absolutely zero sense.

The NBA continuation rule for the most part is really quite logical. When a player is fouled in the act of shooting, a shooting foul is called as opposed to a personal, thus if the shot is made as it is in the act of continuation, it counts and the shooter goes to the line for a free throw, if he misses, he gets two free throws.

Where the confusion comes in is where the steps are involved. We all learned when we first took a basketball that three steps is bad because it’s a travel so best to keep it at two maximum, but why should the extra steps be part of continuation? So a player can get fouled and then casually take an extra step to create a better shot, sink it and get the and-1?

So pretend we have LeBron James, a tank of a human being, who can handle a bit more than just a slight tap on the wrist. He can absorb contact, maintain body control, take an extra step to set up for an easier shot post foul call and finish while every other player on the court stops moving when the whistle is blown? That’s brutal!

4) Technical Foul for Hanging on the Rim:

This is just silly.

You can get a technical foul for just about anything today in the league, hanging on a rim after a dunk attempt is a fine example and uhm, what? Why can players not have their time to swing on the rim after a ferocious dunk? They after all are adults, they can do their thing. They are not children who are getting themselves into danger for climbing a Jungle Gym.

Thing is, if there is no foul, the opposing team can just inbound the ball and push the ball up the court forcing a 5-on-4 because stupid here is caught hanging on the rim.

As well, why call the play dead after such an exciting finish? Let the game go on, let’s not be buzz kills, let the dunker recover and get back on defence to help his team climb out of the 5-on-4 jam. 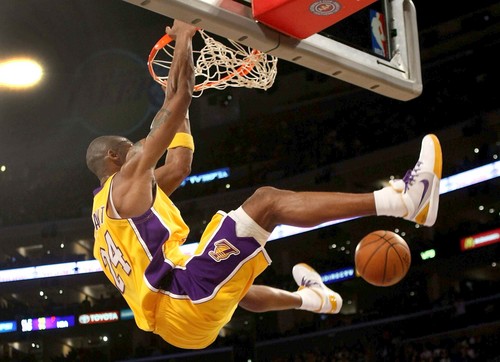 Does anyone still get the purpose of this rule?

A defender is not allowed to stand in the opponent’s restricted area for over three seconds for some odd reason. I mean, if he really wants, why not let him? If an offensive player drives to the net and jumps into him while going for a dunk, sure, call the offensive foul, but why is this even a rule?

Let’s see, Kobe Bryant did this well. He would pump fake, forcing the defender to jump up into the air anticipating a shot, than with the defender in the air, Kobe was able to jump “into him” while going through his “shooting motions”, absorbing contact and getting a foul call.

The defender is in the air, kind of hanging out in limbo for a good second, so why must he get a foul call for the offensive player jumping into him just because that is his “shooting motion”?

This may be by far the most ridiculous rule yet. Be it a phantom calls or just simply James running people over being ruled blocking fouls… wait nevermind. This isn’t actually a rule.

Sports at the end of the day is entertainment. You are entertaining thousands of fans a night inside the arena as well as millions of fans watching around the world. So if you do something exciting, make sure you don’t go overboard with your celebration, because you will receive a technical foul for entertaining fans. Take emotions out of the game essentially.

Whatever excessive post-successful play celebration you had in mind, don’t do it!

Be Tim Duncan. Don’t be this dude:

In my opinion, I think that when a team calls timeout after the other team scores and then is awarded the ball over half court nearer their goal, that is a ridiculous rule. After that timeout the team should be awarded the ball underneath the goal where their opponents scored.