Will the Sixers Finally Get it?

Today is a very special day for Philadelphia 76ers fans. Not really though, they are still god awfully bad, but there is a shimmering light at the end of the endlessly long tunnel that the organization is trying to will their way through.

Currently they are being discussed, but not for the reasons you would come to expect from the embarrassment of NBA franchise that they have become. After years of tanking, the Sixers have finally found something special in the form of Joel Embiid and quite possibly, the 2016 top pick, Ben Simmons, who has yet to play a single NBA game.

It has taken Embiid two whole years to get onto the court, but now, he is showing why he was a prospect ranked higher than even Andrew Wiggins and Jabari Parker on some mock draft boards. Discussed at great lengths in an earlier story, Embiid is showing that he is the real deal with an exceptionally polished array of post moves, a strong and imposing NBA body, and even a nice stroke and incredible range for a big man who is shooting 50% from behind the arc. Defensively, he shows that he can be just as dominant as he is on the offensive end, with good quickness, timing and shot-blocking ability.

The revelation that Joel Embiid has been, has led many to ponder as to why the 76ers are stock piling so many big men. Jahlil Okafor and the now healthy Nerlens Noel. Dario Saric is talented, but 6’10” too, as are Ersan Ilyasova and Richaun Holmes. Simmons is 6’10” himself, and although the organization claims they want to experiment with the LSU product at the one, it is difficult to find success on a team with seven players measured at 6’10” or taller.

A lack of speed, a lack of fluidity, and ultimately, just a lot of floor clogging.

People outside the organization are not the only ones questioning the Sixers’ thought process. After team president and general manager, Bryan Colangelo publicly announced that his team is not actively shopping its big men, one guy on the roster was left just as puzzled as the rest of us. 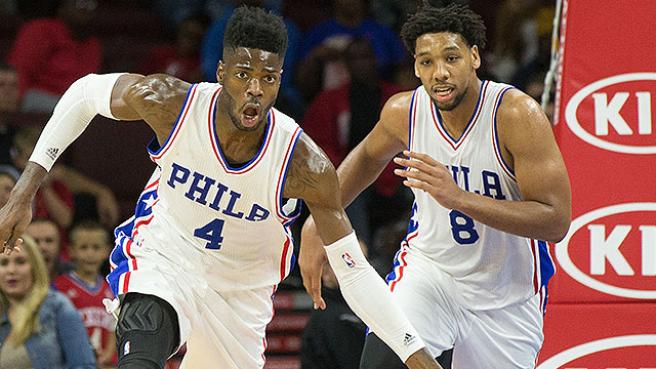 “I don’t see a way of it working,” Noel said Monday, during a full-team practice referring to himself playing alongside Embiid and Okafor. “It’s just a logjam.

“You’ve got three talented centres that can play 30-plus minutes a night and three centres can’t play 30 minutes a night. That’s that. Things need to be situated,” Noel said. “Obviously, somebody’s got to be moved around. It’s a tough situation, but I can only say so much because I have no say and no power.”

Ironically, that someone just so happens to be the odd man out, the one who has been at the centrepiece of the majority of the team-related trade rumours.

Of course, with the Sixers, you cannot rule anything out, but it should be safe to say that out of the two big men who have experienced multiple significant leg injuries, Embiid is the more valuable one. Noel and Embiid initially were defensive-minded prospects, both of whom missed their rookie season due to injury. While Okafor is the more polished offensive weapon, Noel and Embiid share similar defensive qualities, meaning Noel may useful in trade than anyone else.

With the clogging that is created by the logjam, the one who will be most effected in the long run, will be Noel, who is the most limited offensively.

Averaging 10.5-points and 8.1-boards in his first two seasons with the Sixers, the 22-year old has a value and even if the Sixers cannot bring in a fortune, for the sake of the team moving in the right direction a trade has to be the best option.

For a team undoubtedly heading towards the lottery, the 2017 Draft class sees some exceptionally, franchise-altering guards and wing players such as UCLA’s Lonzo Ball, Jayhawk Josh Jackson, and NC State’s Dennis Scott. With Simmons healthy, another year of development from Embiid, Okafor, and Saric, the Sixers will have one of the more exciting young cores in the entire league, one that will undoubtedly make lots of noise for years to come!