Late in the second quarter, DeRozan set Raptor history when he scored point number 10,276 on a pull-up jumper from inside the free-throw line. This is not the only record DeRozan holds with the Raptors. The franchise cornerstone also is the team’s all time leader in games played, field goals made, and field goals attempted. 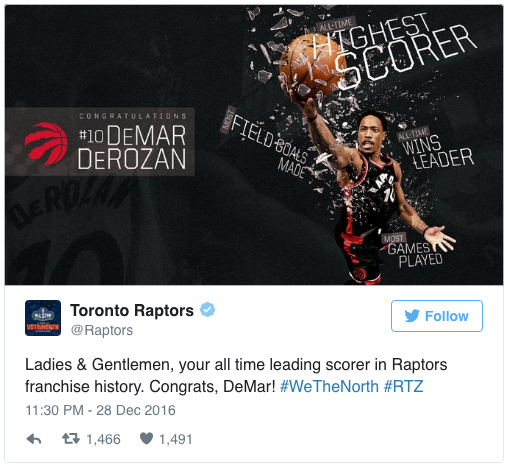 Once a very raw and athletic rookie, DeRozan has put in tireless work to transform into one of the game’s most fearsome scorers. The journey has been long for the former ninth overall pick of the 2009 NBA draft, but DeRozan has worked for everything he has accomplished on the basketball court.

With still another four years to play out past this one on his $139-million dollar deal, it is safe to say that DeRozan will be doing a lot more scoring in the white, red, and black.

Currently averaging 27.5-points, 5.3-rebounds, and 4.1-assists per game, DeRozan is on his way to yet another All-Star season.