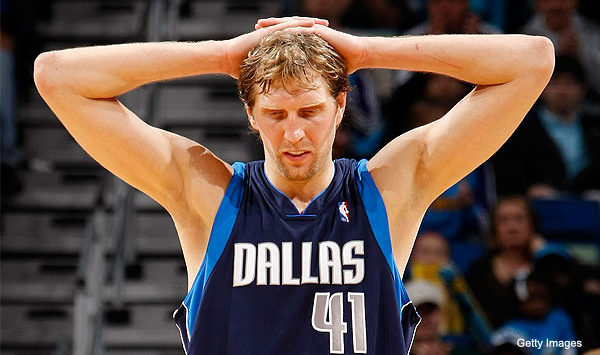 If Injury Issues Continue, Season may be Dirk’s Last

The 2016-17 season has surely been a tough one for Dallas Mavericks.

After handcuffing Harrison Barnes in the offseason, making sure he got his contract signed, things have not gone all that smoothly for a team that for years has been shoe in for the playoffs.

Not so much anymore.

The Mavs are tied for the worst record in basketball and their 38-year old leader, Dirk Nowitzki has only seen five games worth of action due to an achilles injury and remains out indefinitely.

Through five games, Dirk is averaging 12.2-points and 6.4-rebounds per game on a brutal 35.8% field goal percentage. Of course, those are numbers being put up by an 18-year NBA veteran who has been hobbled all season with injuries and for a player who has stated multiple times that he wants to play 20-seasons in the league, he has come to a possible snag.

“If things don’t go so well and it hurts everywhere, it could be that 2017 will be the end.” Said Nowitzki to a German magazine, Sports Bild. “Actually, my plan is to complete the 20 years and play for Dallas until 2018. But just because I signed a two-year contract doesn’t automatically mean that I will play for two years. It could happen next year.”

The 13-time All-Star is the Mavericks leader in pretty much every single category imaginable, signed a 2-year $50-million contract over the summer.

Well, I think it is pretty obvious what Dirk wants for Christmas this year. Going out injured on a poor team, is definitely not the way the curtain should close on Dirk Nowitzki’s career, but then again, father time cannot be beat.