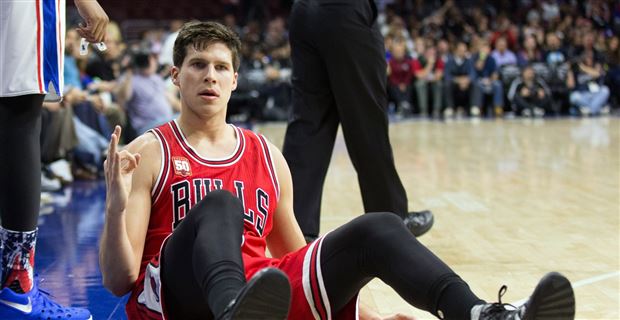 Low key Waiver Wire Players That Can Help You

Eight weeks of fantasy basketball have come and gone so at this point fantasy owners should have a good understanding on where their teams stands, where their opposition is at, and what areas they are lacking in.

Unless your team just straight up sucks, then you’re in a pretty big hole and to you I wish good luck and to not turn into that person who trades his star players unfairly to his friends in the fantasy league.

Don’t be that guy!

Anyways back to the main point. The problem is, you will not find many guys on the waiver wire who consistently can score 12-to-15 points or grab even ten boards every so often. You could be looking for blocks and steals, or assists and field goal percentage, but even the mediocre, small names might just be taken.

So how can you improve your team for the second half of the season as you prepare for a hopeful playoff run? Which low key acquisitions off the waiver wire can take you a long way to improving as a fantasy team?

Here is the thing. If you are not a Raptor fan, chances are you have no idea who ‘Bebe’ is. Lucas Nogueira is the back-up centre of the Toronto Raptors, and while the teams incumbent starter is no doubt enjoying life on many fantasy rosters, Nogueira is only 9% owned.

So if no one knows who Nogueira is, why is he of any use to fantasy owners?

Well, Nogueira will not wow anyone with offensive numbers, only averaging 4.8-points per game. He is averaging a respectable 4.6-rebounds, but again for a centre, a bit more would be nice as well. His value comes with his length – he has something you cannot teach. With Bebe’s length, he is able to get multiple blocks and multiple steals a night, averaging one steal a game and 1.7-blocks per game.

He will not play many minutes, but he has had four-block games this season, he has had 3-steal games this year too. Lastly, in the time he has played, he has shot 74% from the field, which will only help team field goal percentages in fantasy. 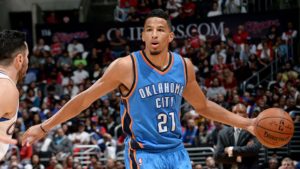 Here is a player who you could say is a second tier Swiss army knife type guy. He will do a bunch of things on the floor, but not like other utility-like players who simply get better numbers across the board, but sadly are all on fantasy teams.

That being said, Andre Roberson will get his minutes, averaging 31:22 to this point in the season, being a starter on the Oklahoma City Thunder. He is only averaging just under seven-points and five-boards per contest, but he is capable of adding a couple of three-pointers a night, and is a SG/SF who averages a very useful 1.3-steals, and one block per game. That all comes with a 45.6% field goal percentage on the season.

Fact is, when you play heavy minutes alongside Russell Westbrook, you will get a ton of opportunities to do many things on the court simply because no one pays attention to you.

For a guy only 12% owned, he could come in handy, especially if you need a few steals to seal a win.

The kid on the Houston Rockets who had that one clutch playoff game? No? Okay, nevermind.

Anywho, since his time in Houston, Daniels has bounced around to a few teams and is now a sharpshooting point guard/shooting guard on the injury-depleted Memphis Grizzlies. You never wish injury on anyone, but as fantasy owners, an injury could go a long way in helping you out and with Mike Conley sitting out for an extended amount of time, that meant more minutes for guys like Daniels. With his play, he has earned more starters minutes.

It’s all about turning negatives to positives. Us fantasy owners are very optimistic human beings.

How has Daniels fared with the extra minutes? He is currently averaging 9.9-points per game on the season, recently putting up a combined 60-points in back-to-back games. His value clearly comes from his shooting as he is averaging a very solid 2.1 three-pointers per game, which over a week can turn into a very big deal.

He has four three-pointers in each of his last two games as well. This kid may be waiver player, but he can shoot the basketball. 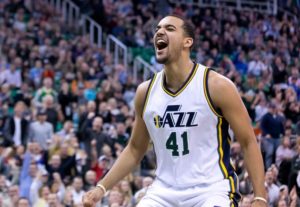 The Utah Jazz have been solid this season. Rudy Gobert has turned into a defensive anchor, Gordon Hayward has been playing like an All-Star, Rodney Hood and the supporting cast has been good, all while Derrick Favors has been having issues staying healthy and effective to this point.

Enter Trey Lyles. The 6’10” power forward has very quietly had a very nice season coming off the bench for the Jazz. The former Kentucky Wildcat is averaging 9.2-points and 4.3-rebounds per game. What adds to his value is that he is a big man who can shoot. His field goal percentage may not necessarily suggest that (41.2%), but he averages a made three a night and shoots an impressive 86.2% from the free throw line so it is highly possible that his field goal percentage will slowly go up in time as well.

He is currently 30% owned, so at least some realize the value he has, don’t let him go in your league if he is still available!

How this guy is only 5% owned is crazy, well not really.

Doug McDermott is coming off an injury, but as he gets back into the swing of things in Chicago, he will get his opportunities. For a team that lacks any sort of shooting, Doug McBuckets will be a guy the Bulls will rely on stepping up and he has shown in the past that he is capable of it.

The third year out of Creighton has also seen a rise in his stats from years one to year two, so expecting even better numbers than he is putting up now is not out of the realm of possibility. To this point McDermott is averaging 9.4-points per game on 46.8% shooting and a crazy 90.5% from the free throw line.

Before his injury, McDermott has shown signs of getting even better as a player. As the second half of the season begins, he may just be a guy to keep an eye on moving forward.