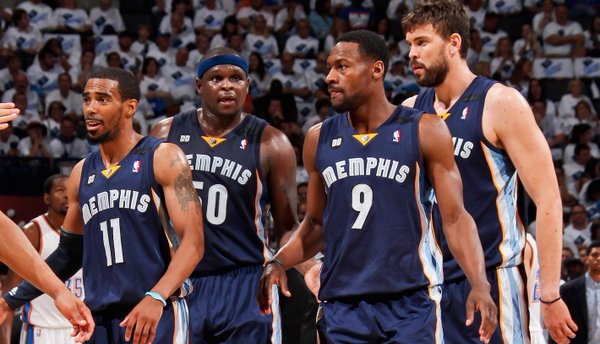 Grizzlies Keep Clawing, but What is Their Reality?

The ‘Grit and Grind’ era has been personified by work ethic, toughness, and physicality.

An old, hard-nosed style of basketball often used back in the 80’s and 90’s, a style made famous by the ‘Bad Boy’ Detroit Pistons was recreated in Memphis, Tennessee. It’s back bone over the past eight season, has been a core of four players – Zach Randolph, Mike Conley, Tony Allen, and Marc Gasol.

Conley, drafted third overall in the infamous 2007 NBA Draft, which saw Greg Oden picked up right ahead of Warriors superstar Kevin Durant, became the first cornerstone placed in the foundation of what the Grizz were to become. That same season, the Grizz continued their rebuild, moving the franchise’s all time greatest player to the Los Angeles Lakers, acquiring the rights to his younger brother, Marc Gasol.

With Conley and Gasol in the fold, the identity-less Grizzlies began to improve and find their own uniqueness. All-Star Zach Randolph was then acquired. The Grizz found a leader in Conley while Gasol continued to develop and improve, turning into a force on both sides of the court. Under new head coach Lionel Hollins, the team found a commitment to defence and thus finally found their identity as a physical, bruising team that can defend each position, leaving their opposition feeling the aches and pains suffered in-game for days after.

From basement dwellers, the Grizz were able to climb to 10th in the West, finishing with a 40-42 record.

With the face of the franchise Rudy Gay in the fold, the Grizzlies went out and brought in Tony Allen, another elite and gritty defender to push the Grizzlies into the upper echelon of defensive teams in NBA history. They became a team that fed of their defence, one that did not particularly shoot well, but one that worked for every basket, patrolled the painted area and forced opposing defences to cave into their toughness.

At 46-36, the Grizzlies were able to work their way back into the postseason and as an eight seed, took down the Spurs in the first round 4-2 before falling to the Thunder. 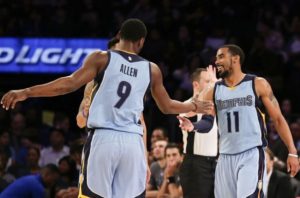 For the following five seasons a lot of things changed in Memphis. They continued to be a playoff team that kept coming short of their ultimate goal. Lionel Hollins has come and gone, David Joerger had his chance and now David Fizdale is at the helm in Memphis. Rudy gay had his time and is now gone. The Grizzlies experimented with Mike Miller, Courtney Lee, Tayshaun Prince, and Jeff Green as complementary wing players who can stretch the floor. The new face this year is Chandler Parsons.

Over the past eight seasons, a lot of things have changed except for one thing. Coaching changes, front office moves, player transactions, but the core four have been left the same and untouched. Gasol, Conley, Randolph, and Allen are still here.

In an injury-riddled 2015-16 season, the Grizzlies signed an NBA record 28-players throughout the year just to fall in four games to the San Antonio Spurs in the first round of the playoffs.

Over the offseason, the Grizzlies re-signed Conley to a massive long-term deal, while adding Parsons to the roster as well as a couple rookies who playing style seems to fit right into what the Grizzlies are known for.

Early on, it seems like nothing is bound to change. As the core ages, the toughness and facade behind the Grizzlies seems to fade. The consistent playoff failures only decrease the level of intimidation that the Grizzlies once possessed.

What if the core is the problem and not everything around it?

The team continues to play a style of basketball that is non-existant in the today’s NBA. While they continue to bang and bruise teams, the opposition outshoots them. Small ball kills them, and their lack of outside wing play only buries them further into the hole that they keep digging.

Conley is now out for an extended period of time with a vertebrae injury. Randolph is in his 15th season, Gasol is no longer the defensive anchor he once was, while Allen is 34 and cannot keep up with the younger wings and guards like he used too. Parsons has had trouble staying on the floor, leaving 18-year NBA vet, Vince Carter as the top scoring option. 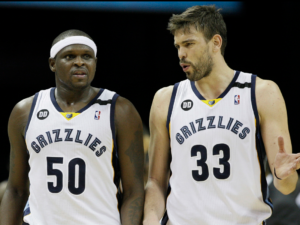 As great as the core four has been and still is, they are not elite players. Neither one of them is a guy a team can confidently hand the ball to in crunch time and say, “create something for us offensively”. The Grizzlies have no shooting threats who can stretch the floor, they rank 28th in the league in pace and 27th in points per game, while their defence ranks sixth in points allowed.

The old cliche, good defence leads to good offence only works with competent offensive weapons. NBA teams have changed the way they play. The Grizzlies have not.

Maybe it’s time to dangle a Zach Randolph in trade talks, or see who has any interest in Tony Allen? Who knows, maybe take a look at the haul you could bring in for Gasol.

Every player has an expiration date, and the core of the grizzlies have logged in many miles over the past eight season.

It’s time for the Grizz to stop taking the playoffs for granted. To stop looking at the surrounding role pieces, the coaching staffs, and maybe to look at the cornerstone players and ask if what they have is enough.

The clock is ticking.