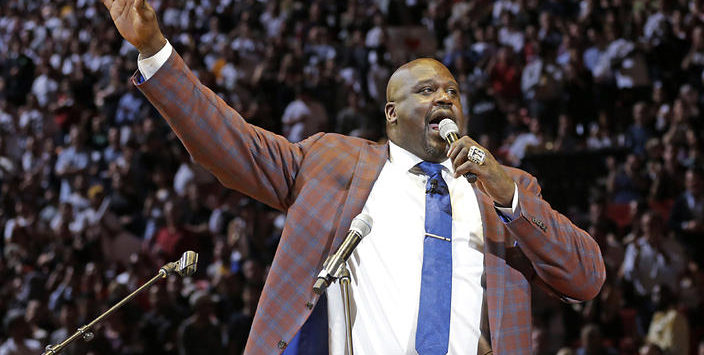 A few short days after Tim Duncan his number raised to the rafters by the San Antonio Spurs, the Miami Heat paid respect to a big man of their own. On Thursday night, the Shaq watched his number ’32’ get lifted to the rafters alongside Heat greats Alonzo Mourning and Tim Hardaway.

Maybe most known for his time in Orlando and Los Angeles, O’neal arrived to the Heat in July 2004 in his infamous 18-wheeler, with ‘Diesel Power’ tattooed to the side of the truck.

“I want y’all to remember this feeling right here. I’m going to bring a championship to Miami. I promise.”

As the always humble Shaq began his speech, he brought up two former teammates and Heat stars Udonis Haslem and Zo, thanking both of them for helping him and the Heat win their first title. O’neal then went on to thank Pat Riley, the Arison family, the fans, his family, and the rest of the Heat organization.

Pat Riley probably said it based when describing the man of a thousand nicknames: “He’s charismatic, he’s global, he’s iconic, he’ll make you laugh in a minute… and he wears size 22 shoe.”

Now, can you dig it?