Raptors Keep Winning, but Big Test About to Commence

At 20-8, the Toronto Raptors completed a rather weak part of their schedule with the only real test being the Cleveland Cavaliers – a test that the Raps failed to capitalize on. Now, the Toronto Raptors are set to go out on the road for six games, with eight of their next ten opponents being playoff teams. The Raptors won’t have to see the Cleveland Cavaliers for a long while now, but instead, they will play a tough, upstart Utah Jazz team twice, the Golden State Warriors, the San Antonio Spurs, and the Houston Rockets among other teams.

Point is, it’s going to be tough, but exciting. Oh and you cannot forget their January 7th encounter with the Chicago Bulls, a team that the Raptors have not beaten in forever.

We have discussed all season that the Raptors have been missing those big morale-boosting victories. Looking at their schedule, there has really only been one against the Houston Rockets on the road. Otherwise, the Raptors have lost thrice to the Cavs and once the the Warriors. Now is there chance to make a stand, to extend their cushion over the Eastern Conference teams chasing them, while most importantly just getting big wins to feel good about themselves as the new year begins. 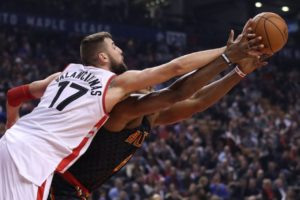 What that means is the Raptors will have to come prepared. They cannot wet the bed defensively like they did against the Atlanta Hawks a few nights ago.

The Raptor record may look a tiny bit skewed based on the competition they have been playing. They are not the same team they were last year, at least for the time being with inexperienced youngster playing the majority of the minutes that will belong to Jared Sullinger once he returns from his foot injury.

This a team a team missing its toughness and its defensive grit that last season’s team became known for. This year, the team’s offence has been carrying the big load. Everyone has been stepping up. Kyle Lowry and DeMar DeRozan have been playing like the All-Stars that they are. Terrence Ross, Norman Powell, Cory Joseph, and Jonas Valanciunas have been offering secondary scoring, while guys like Patrick Patterson have had their shining offensive moments as well.

Joseph has to sit a night out? No worries, Fred VanVleet can fill in momentarily.

Utah is a tough defensive team, the Raptors will have to match that defensive toughness if they want to win. The Blazers, Rockets and Warriors provide superior shooting. With three point defence being one of the Raptors’ biggest flaws, they will have to communicate better, fight off screens and step out on shooters more effeciently.

Of course a trade at the deadline would be nice, but until the organization gets to see what Sullinger has to offer, they cannot and will not make any rapid decisions. This is why the team has to show what they can do now.

Balls in the Raptors court now, time for them to make their power move.