From Providence to a Special Young Core

The Minnesota Timberwolves are a team on the rise. A young team, but a team loaded on talent and potential. In Coach Tom Thibodeau, the Wolves have found the head coach of the franchise – a man with the responsibility of establishing a culture on a team that needed development and time.

In the 2016 NBA Draft, the Wolves took their next step forward, drafting the Connecticut-born Kris Dunn out of Providence. At 6’4”, Dunn was one of the bigger point guards entering the draft, but with that being said, he was also highly regarded as the top player at his position this past draft.

“I can play both ends of the court,” said Dunn when explaining why he was so highly coveted in the 2016 Draft. “I think the main focus was that I’m a big guard and I can defend.”

What has become one of the real rarities in the new-age NBA are players who stay in college for more than even a single season. Dunn decided to stay all four years in Providence, transforming from a skinny freshman guard into a two-time consecutive Big East Player of the Year.

“My family and my education,” said Dunn after being asked on what kept him in college through his senior year. “It just helped me mentally. I think I learned more about the game staying for all four years.”

Although it has been a bit of a process for Dunn to get accustomed to the NBA game, as it is for many other rookies, it is easy to see why his stock was so high and why he has the potential to become a star on this level of basketball. With an exceptional set of physical tools, Dunn has a 6’9” wingspan, height, and a very projectable frame with elite athleticism and quickness. His style fits an uptempo pace where he can use his speed to push the offence. 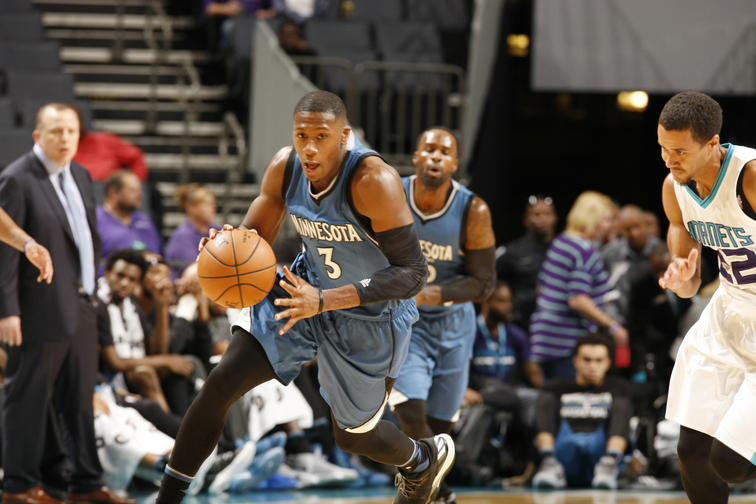 Conveniently, he has young studs all around him and once he adjusts to the NBA game, he will find it much easier to run an NBA-level offence with his speed and athleticism. With Karl-Anthony Towns, Andrew Wiggins, and Zach LaVine, the Wolves have a very special core in place, and despite Dunn explaining that his main focus is on improving and not feeling pressure, as a young rookie, pressure is something he will have to learn to cope with and overcome.

Playing under Coach Thibodeau specifically has its fair share of ups and downs, especially for a young player trying to make a smooth transition from college to the NBA.

“He teaches you the game, he wants you to be disciplined,” Answered Dunn in regards to his head coach. “But at the same time he wants you to give it your all every time you step onto the floor. It’s been a learning process and we’ve been trying to build chemistry.

Thibodeau has always been known for his hard-nosed, defensively tough style, a perfect fit for a player like Dunn who is known for his effectiveness on both ends of the court. Thibodeau may be the guy to not only help Dunn develop into a great basketball player, but the guy to push the young and talented Wolves from mediocrity into the NBA elite.

On a team this young and one that lacks veteran presence, Dunn looks towards anyone he can find when it comes to learning the ropes of the league.

“Everybody,” Said Dunn. “Because I think everybody has something different, you know? Everybody has different ways of learning the game so I try to go to everybody.”

Moving forward, the growing pains will continue for Dunn and the young Wolves, but the talent is there and watching Dunn develop into a great NBA guard will be special to watch.