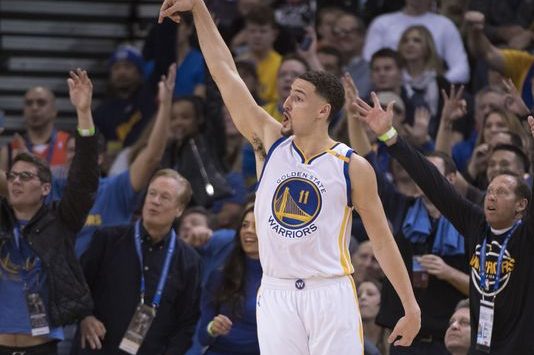 Having Klay Thompson on your fantasy team sometimes has its benefits I’d say.

In case you missed it, and many on the east coast probably did, partially due to crappy bed times, Klay Thompson went off for 60-points in three quarters as the Golden State Warriors simply demolished the Indiana Pacers by a score of 142-106.

Thompson, who registered 29:03 minutes of game time went 21-33 from the field, hitting eight three-pointers in the first 60-point effort since that of Kobe Bryant’s in Kobe’s final career game.

Crazy stat, Klay Thompson dropped 60-points in 29-minutes of game time, which means he scored 2.04 points per minute. When Wilt Chamberlain scored his 100-points, he played 48-minutes and scored at a 2.03-point per minute pace. Pretty incredible stuff!

As unfair as it is starting to get facing Golden State, I’m sure somewhere deep down, there must be some sort of appreciation for the shooting brilliance that the Warriors show off on a nightly basis.

Just one of those nights at the office for one half of the Splash Brothers.