Last week messed around and got a triple double.

The Rap Legend, former member of N.W.A. and now comedic actor Ice Cube is about to take his talents to the basketball court.

The league has reportedly received commitments from the likes of Kenyon Martin, Jermaine O’neal, ‘White Chocolate’ Jason Williams, Rashard Lewis, Stephen Jackson, and plenty more. Gary Payton has even added his name to the list as a coach. 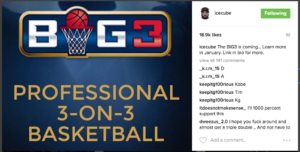 Big3 will feature eight teams, a five player per team concept and will tour all around the country. Ice Cube is the co-founder of the league, alongside his longtime business partner Jeff Kwatinetz.

“I thought of this concept as a fan who got sick of seeing his heroes retire and not play anymore,” said Ice Cube on The Vertical podcast. “A lot of these guys can still play once they retire – just not the back-to-backs or four games in five nights.”