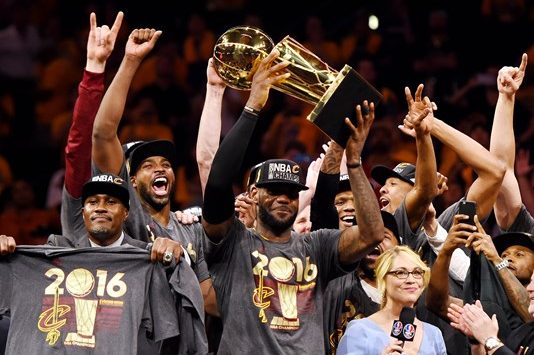 2016 is wrapping up quick and looking back what a year it has been in the NBA. From records breaking, to the creation of new rivalries and the revival of old ones, to seeing new blood enter the league through the NBA Draft, and to lastly, the crowning of a new champion!

BallnRoll takes a look back at the top moments of 2016 from across the association in what was a year to remember!

With racial and social injustice running rampant in the United States, during the ESPYs, Chris Paul, Dwyane Wade, Carmelo Anthony, and LeBron James kicked off the event with a strong and powerful message preaching the need to put an end to police brutality and gun violence.

Never forget about the second half of the ‘Splash Brother’. Earlier this season, the Warriors destroyed the Indiana Pacers thanks to a little help from Klay Thompson who dropped 60-points… in 29-minutes.

With the move, a new villain in NBA circles arose.

After spending over a decade in Miami, helping the Heat win all three of the franchise’s championship, Dwyane Wade signed with the Chicago Bulls over the offseason. In November, ‘Flash’ made his return home.

Probably the greatest power forward to ever step foot on the basketball court, Tim Duncan retired from the game following the 2015-16 campaign and earlier this season, Duncan was honoured by having his jersey be raised to the number. His number ’21’ will never be worn again by a Spurs player.

The Slam Dunk Contest is back and it is all courtesy to Zach LaVine and Aaron Gordon who tore the roof off the Air Canada Center during the 2016 NBA All-Star Game in Toronto, Canada.

So many storylines came out of the 2016 Olympic Games in Rio. Carmelo Anthony’s final Olympics, Paul George returning to the international stage for the first time since his gruesome leg injury, but no story was bigger than the tournament results – U.S.A. Men’s basketball gold!

On the same night of another legendary moment, the Golden State Warriors, behind two-time M.V.P. Steph Curry broke the Chicago Bulls record for greatest regular season in NBA history when they won game number 73 in their final regular season game.

After a huge pre-game celebration honouring Kobe Bryant’s legendary career, Kobe went onto put on the final show of his NBA career, going out the only way he knew out. A win against the Utah Jazz, dropping 60-points in his finale.

Anything is possible in Hollywood.

The biggest story of all! Never let the Warriors blowing a 14-point fourth quarter lead on Christmas day distract you from the fact that the same Golden State Warriors blew a 3-1 NBA Finals lead in 2016. LeBron James promised to bring a championship to the hungry city of Cleveland and there is no better way to put an exclamation point on 2016 then to look back at one of the greatest players in NBA history fulfilling that promise.

The Kyrie Irving three-pointer and the LeBron James block will live on in history.