After an interesting summer, it has been a very trying regular season down in Chicago.

Sitting at 23-24, good for eighth in the Eastern Conference, things came to a boiling point after the Chicago Bulls coughed up a late 10-point lead to the Atlanta Hawks, falling 119-114. After the loss Jimmy Butler and Dwyane Wade did not hold back when talking to the media in the locker room post-game, bashing the heart of their teammates.

“If you don’t come into this motherf****r pissed off after you lose any game, if you’re not pissed off that you lost, something’s wrong,” Said a disgruntled Butler. “This is your job, this is what you’re supposed to love to do and I don’t think everybody looks at it that way. I want to play with guys who care, that play hard, that want to do well for this organization…”

Wade too decided to air some his dirty laundry to the media. The former three-time NBA Champion had a similar message as the star two-guard clearly has not received what he signed up for.

There is no denying that the past two years have been rough for the Chicago Bulls franchise. It started when Butler called out rookie Head Coach Fred Hoidberg last season for a lack of leadership and once again, the former Iowa State coach seems to not be able to handle the clashing personalities and egos in his locker room this year.

With no Tom Thibodeau presence, the Chicago Bulls seem to be imploding and fast.

Earlier this season, Rajon Rondo budded heads with Hoidberg and the organization finding himself in the doghouse ever since, but shortly after the backlashes directed at him and his teammates by Butler and Wade, Rondo was quick to respond on his personal Instagram account. 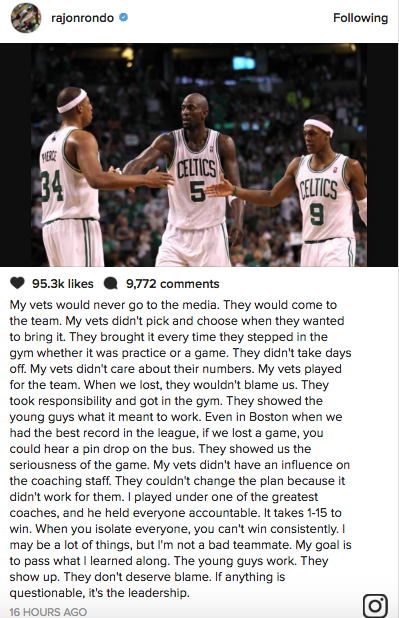 Fact is Jimmy Butler is angry, Dwyane Wade is angry, Rajon Rondo is angry, and neither Head Coach Fred Hoidberg or the organization cannot find a solution. The leadership in this organization from the top down is missing and a storm is brewing in Chi-Town that can lead to more and more locker room turmoil.

Was calling out the entire roster to the media the best move on the part of Butler and Wade? No, as the team leaders, they must be the ones to speak to their teammates when times are rough, educate the rookies, be the leaders that they earned the right to be. While turning to social media wasn’t the brightest idea, Rondo is a thousand percent correct and if anything, this is the time that the Bulls need their two superstars to keep everything in-house and work out a solution.

The locker room in sports is sacred, and Wade and Butler may have just hammered the nail into the coffin on what will continue being a very disastrous rest of the season.