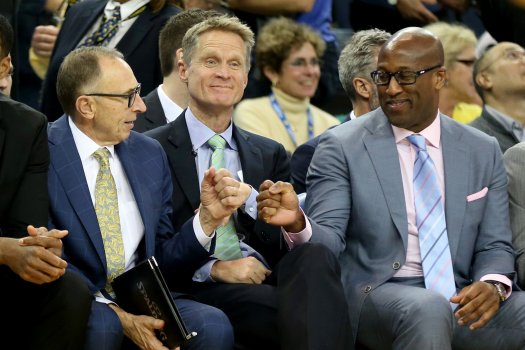 Steve Kerr to Coach at the 2017 NBA All-Star Game

To the surprise of absolutely no body, Golden State Warriors Head Coach Steve Kerr will be coaching the Western Conference All-Stars at the ‘Big Easy’ this February.

With the 34-14 Houston Rockets losing to the Milwaukee Bucks last night, the Warriors clinched the best record in the West through games played February 5 among the 14-teams with eligible coaches. San Antonio’s Gregg Popovich is ineligible of the honour to take his staff down to New Orleans as he coached the Western team last year in Toronto.

Pretty impressive to say the least!

This honour has been bestowed upon Kerr ironically a day after the Warriors head coach ripped NBA players for making a “mockery” of the their All-Star vote.

“I am very disappointed in the players,” said Kerr, who cast his ballot Sunday for the All-Star reserves. “They asked for the vote and a lot of them just made a mockery of it. … I saw the list. I saw all the guys who got votes. Were you allowed to vote for yourself? I don’t know. Were guys voting for themselves? There were 50 guys on there that had no business getting votes.”

Kerr had a point too. The pride of Georgia, Zaza Pachulia received 19-votes, four more than Defensive Player of the Year candidate, Rudy Gobert. Other players to get votes were Michael Beasley, Randy Foye, and Tomas Satoransky – and I guarantee you that no one knows who Tomas Satoransky even is.

Either way, congratulations to Steve Kerr and his coaching staff!