Are the Warriors and Cavaliers the NBA’s New Rivalry?

Seems like no matter who you ask, the answer is always different.

LeBron James doesn’t believe the two teams are rivals, but then you ask his head coach, and Tyron Lue will disagree. Head over to the other side and Steve Kerr believes the hype around the so-called rivalry is overplayed, but Draymond Green believes otherwise.

So maybe what these two teams need is an outside opinion. The question is, are the Golden State Warriors and Cleveland Cavaliers the NBA’s new heated rivals? Well, it depends on what you consider the definition of rivals to be.

Tons of trash talk between the two teams? Yup, the animosity is there. Physicality? Plenty of that tomfoolery. Fierce competition, blow outs, close games, NBA Finals showdowns, distaste, key gut-wrenching plays, clutch shots, Draymond Green crotch shots – it’s all there. A rivalry doesn’t have to be rooted in hatred. If two teams brawl every time they meet, yes there is tension, but that is not the only reason that rivalries are created.

The Cleveland Cavaliers and the Golden State Warriors are the NBA’s new rivals solely because they are head and shoulders above the rest of their competition. Whenever both teams meet, its a marque match-up and no matter whether you are a Brooklyn Nets fan (I am so sorry), or a Phoenix Suns fan, your eye balls are glued to the television screen watching the Cavs take on the Warriors.

The level of competition, the amount of sheer talent on the court when both teams are set to battle is the reason the two are rivals. Meeting in two straight NBA Finals is why the two teams are rivals and barring anything catastrophic, both teams will meet again in the 2017 NBA Finals for a best two out of three grudge match. 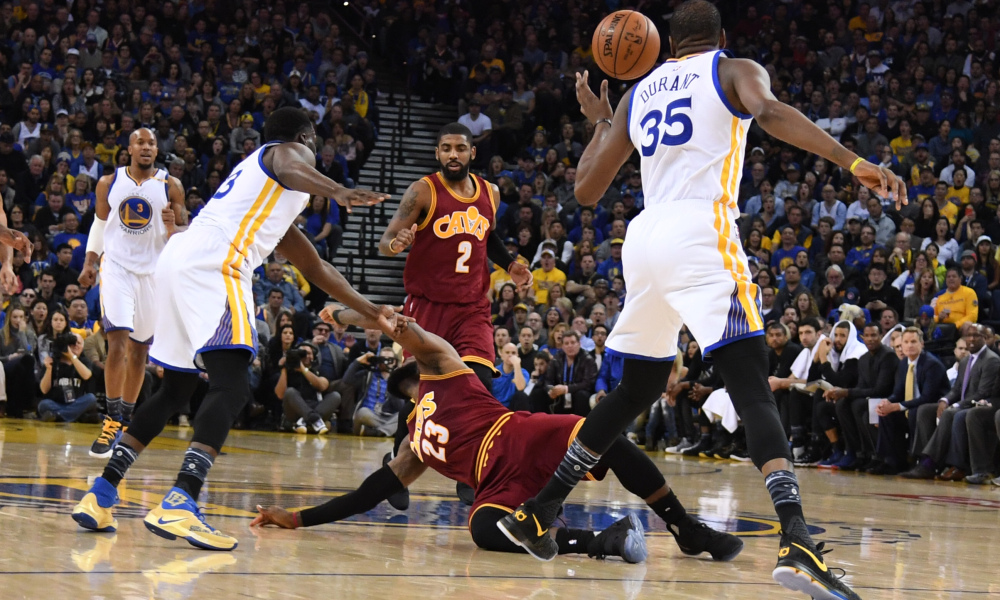 You say this is not a rivalry? I say, refer yourself to a dictionary.

“To me it was because they had beat us four straight times and that’s never fun when a team has your number for four games, so it felt good to redeem ourselves from the last effort in Cleveland,” said Klay Thompson after a 26-point performance as the Warriors blew out the Cavs on their home floor by a score of 126-91.

While the score suggested a clear blowout, the game displayed far more than just one team appearing desperate for retaliation and another fully unprepared for the match-up. After LeBron flopped to get a whistle on what appeared to be a hard foul, Green mocked James in front of a very rowdy Oracle Arena crowd.

“Yeah I think it’s a rivalry. Just me though,” Green said. “It’s definitely fun. A team that you beat and beat you. It’s definitely fun. You look at the last two years and this year, we’ve been the top two teams in the league each year. I look at it as a rivalry and it’s definitely a fun game to play in, but I don’t really care if anyone sees the game as how I see it.”

The fun did not stop there. The Warriors were thirsty for revenge. After letting a 3-1 deficit slip away in the NBA Finals followed by giving away a 14-point fourth quarter lead on Christmas day, the Warriors kept their foot on the gas until the final whistle. Case in point: with the Warriors up 31 with under seven minutes to go and the Cavaliers unloading their bench for the final stretch, there was Klay Thompson casually draining three-pointers pushing the game to an even more lopsided conclusion.

Still don’t think this is a rivalry?

The next stop for both teams is undoubtedly the NBA Finals. With the Finals and season match-up nodded at one, there is really only one way to solve this rivalry dilemma. This time, the NBA Finals will have a new piece added to the puzzle. Kevin Durant has been the best player on the court in both games this season between the Warriors and Cavs, and Cleveland has found no answer to this point.

It is yet another added chapter to what has been a very fun and intense rivalry and one that will most likely be revisited in the very near future.