From Brazil to the NBA

Lucas Nogueira Slowly Carving a Path in the NBA

Tall and lanky, often quiet, with the hair resembling that of Toronto’s superstar musician, The Weeknd, Lucas Nogueira is a rare breed of size, agility, and athleticism. A project filled with raw talent and a load of untapped potential. He stands at seven-feet, with a 7’6” wingspan and at just 24-years of age, ‘Bebe’ is quietly carving out a unique path for himself as an NBA player, one that he started as a relative unknown in a country not well known for developing basketball talent. He has continued to grow and develop, and now, it is Nogueira’s time to make a name for himself, under the brightest stage of the basketball universe.

In the history of the NBA, there have only been a mere 17 Brazilian-born NBA players – Lucas Nogueira, the Rio De Janiero native, is one of them. In a country where soccer is king and an obsession with MMA is constantly growing, basketball has never really captivated one of the largest countries in the Western hemisphere.

In Brazil, there are the Ronaldinhos and the Pelés of soccer, the Anderson Silvas and the Jose Aldos of the MMA world. As for basketball, there is Leonardo Barbosa and Nene. The cache attached to the names of Brazilian basketball players falls considerably when compared to the likes of the soccer and MMA heros of Brazil.

“I used to play soccer,” Nogueira told BallnRoll in an exclusive interview in reference to how he found basketball. “Then when I was 13 or 14, I was walking to go to school and somebody stopped me and asked if I wanted to play basketball and of course i said maybe. Before I had no idea what basketball means. He said we should try so I told him to text my mom and dad to see if they would approve it and he had my dad and mom approve it. I started at 13-14 and at 15 I moved to Spain to play pro.” 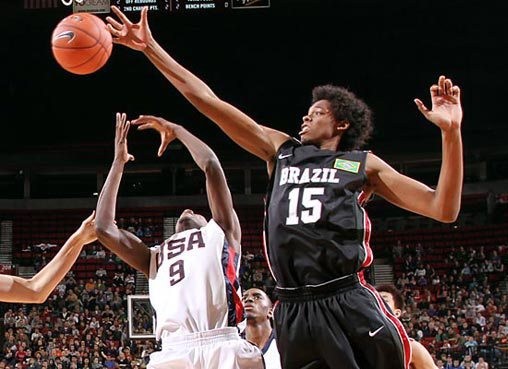 While Nogueira may have found the game late, he has always had the physical tools to excel in the sport. The height, the athleticism, the fast twitch muscle fibers, it was all there. You cannot teach size, nor can you put a cap on the athleticism that Nogueira possessed. With the fluidity and footwork that ‘Bebe’ has learned while playing soccer, he was able to transfer those skills onto a basketball court.

Between 2009 and 2011, Nogueira played for the CB Estudiantes junior team in the Spanish capital of Madrid, after which he was loaned to CB Las Rozas for the 2011-2012 season. He would rejoin CB Estudiantes in January 2012 playing one more last season in Spain the following year.

On the day of the 2013 NBA Draft, Nogueira signed a two-year contract extension with CB Estudiantes. That same night, ‘Bebe’ was drafted by the Boston Celtics, but had his draft rights traded to the Atlanta Hawks.

Before playing a single NBA minute, Nogueira was off to his third team, the Toronto Raptors, in a trade that saw him move from Atlanta with Lou Williams north of the border for John Salmons and a 2015 second-round pick. In Williams, the Raptors received a Sixth Man of the Year award player, a dynamic scorer and a dangerous shooter. Meanwhile, Nogueira, still the relative no-name, was moved to the D-League where he spent the majority of his time with the Fort Wayne Mad Ants and then the Raptors 905.

“In the D-League, I learned how to value life more,” Said Nogueira, “because the glamour, the salary, the situation is completely different in the NBA from the D-League, and when I went down there, they helped me understand that – to give more value for the small things… I’m never going to forget my experiences at Fort Wayne and with the 905.”

Nogueira’s path to the NBA has truly been a journey of learning about himself and learning the ropes of the league. Seeing only 35-games of limited action in his first two years with the Toronto Raptors, Nogueira continued to show the potential that scouts lauded over down with the Raptors 905. The athleticism, the potential to become a fierce rim protector on the next level, the ability to run up and down the floor like not many big men can do.

While not many fans in Toronto realized it, the Raptors organization new what they had in Lucas.

“I came about two years ago, and saw someone with a great basketball IQ, “said Raptors Assistant Coach Rex Kalamian of Nogueira. “Great hands and very long. Knew his way around the pick and roll. Never keeps the ball in his hand for too long. Will quickly look for the open player. Always looking around, looking at his surroundings, making sure where everyone is. Has speed to close out a player, which leads to some great blocks, defensive stops. Surprises players how fast he gets there, makes them think twice attacking the rim. Also keeps the ball high around the rim. What we saw and believed in, is pretty much what you are seeing on the court right now. He had the right tools, the right seed for us to work on.”

Nogueira credits Bismack Biyombo with helping him develop as a player, especially on the defensive end.

“He had a great impact on me, helping me become a better professional, a better person. I just try to keep his lessons.”

As Nogueira is finally stepping into a much bigger role as the secondary big man of the Toronto Raptors, the entire NBA world is starting to get a glimpse of the potential hidden in the seven foot Brazlian. The lessons he has learned in Spain, in developmental, and from Biz is starting to pay off, but another contributing factor to the more motivated Nogueira has been the birth of his first child.

“Being a dad,” Explained Nogueira, “being a father is one of the more special things because now I don’t see life as just about me. I got to think twice before I make a decision because I have to think about my daughter right now, so I use my daughter to motivate myself to have better games every night.”

In his first full year in the NBA, Nogueira is averaging 5.4-points on 67.6% shooting from the field, five boards, one steal and nearly two blocks per contest. He has been the best rim protector and screen setter on one of the NBA’s best teams. With his length and quickness, he has shown the potential of becoming one of the best defenders in the entire league, while offensively, his constant motor creates opportunities for himself and his teammates. 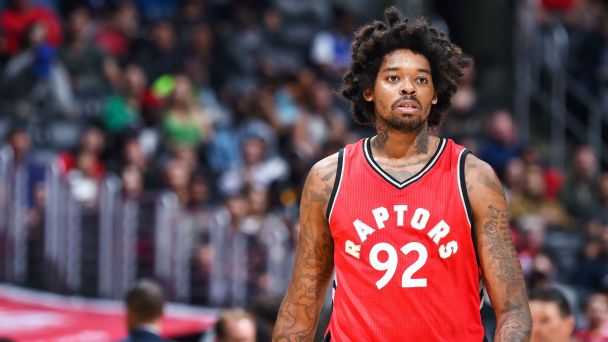 As Nogueira continues to grow in front of our very eyes, he has been compared to many other rim protectors in the NBA. From Miami’s $100-million man Hassan Whiteside, to former teammate Biyombo.

“I personally don’t like those comparisons,” Bebe told BallnRoll. “I think I have my own style. I think like okay we both block shots, but I think I’ve got my own style. I don’t want to be compared, I just want to play my game and try to help the team win as many games as possible.”

Quiet, yet a classy individual who is slowly learning about the league and how to contribute to his team, Nogueira understands what his job on the Raptors is. He is the consummate team player, who knows his role.

“Guys who try to do ten, 20-things, they’re not in the league anymore because the NBA is about what you can do best.” Said Nogueira. “So I can do like ten things probably, but maybe best can do three to four and those three to four are what [Coach] Casey wants me to do. So if you want to play minutes, I got to do what Casey wants, so I try to concentrate and do those three to four things every night because those things will keep me on the floor.”

With Nogueira quickly developing into one of the better young big man in the entire league, worrying about not getting minutes may just be a thing of the past for the 24-year old Brazilian.