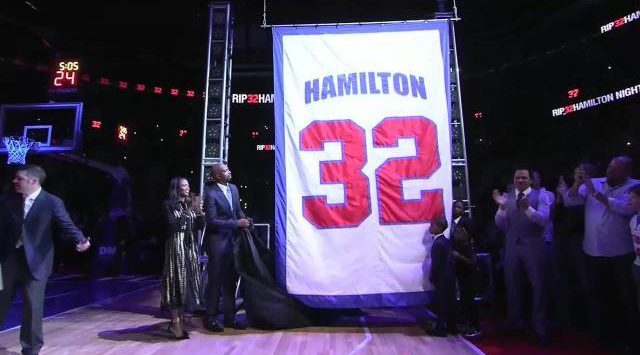 On Sunday night, one of the great Detroit Pistons watched his number get sent up to the rafters at the Palace of Auburn Hills.

After the way his tenure with the Pistons ended nearly five years ago, Richard Hamilton was still in disbelief while standing in the middle of the floor he played on for nine straight seasons. Nevertheless, on the night that the Pistons played host to the Boston Celtics, Hamilton’s number 32 was retired.

“When I left here, I didn’t leave on good terms — and I kicked myself in the butt each and every day I was in the locker room with that Bulls uniform on,” Hamilton said. “I said, ‘This isn’t me — I’m a Piston.’

“This is an organization I’ve been competing with and going at the (Bulls’) Kirk Hinrich and Ben Gordons. It was bigger than basketball when I put that Pistons jersey on.”

Hamilton was a three-time All-Star as a member of the Pistons and helped the franchise win a championship against the favourited Los Angeles Lakers in 2004. The most unique aspect of Hamilton’s game was his ability to move without the basketball, a skill that fit right into the mold of the early 21st century “Going to Work” Pistons.

“For me, it’s bigger than basketball — I have little kids. Deuce is 9, Parker is 6 and Payton is 4. They never got an opportunity to experience the sellouts here, when we were winning each and every year and the championship and things like that,” Hamilton said. “For me, the biggest reward of all is bringing my kids in this building, seeing what daddy did each and every day, understanding how daddy went to work, understanding the fans and Detroit and everything about this city.

“I’m just happy they can be a part of this moment.”

Young Stars Get Theirs

Klay Out for Season