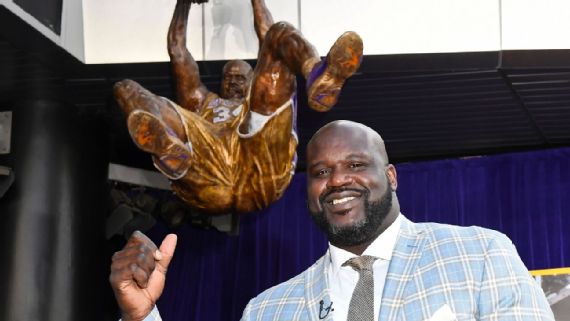 There is a brand new bronze statue in front of the Staples Centre and no, it is not of a former Los Angeles Clippers great.

On Friday evening, the Los Angeles Lakers unveiled a statue of Shaquille O’Neal dunking at the Staples Centre, a ceremony that included both Shaq and former teammate Kobe Bryant sharing a stage, exchanging pleasantries. The two Laker greats did spend quite some time together in the purple and gold accumulating three NBA Championships over that span. Over that same span both players have turned into superstars, O’Neal in particular winning three Finals Most Valuable Player awards as well as a regular season M.V.P. in his time with the Lakers.

“I don’t think there was ever gonna be a doubt,” Kobe said. “S—. He won three championships here. What else you gonna do?”

There really wasn’t any real doubts. The Staples Centre has been accumulating more and more statue as the Lakers’ legend continued to grow. From Kareem Abdul-Jabbar to legendary broadcaster Chick Hearn to Magic Johnson, the Lakers franchise has been honouring its greats with statues for a while now. O’Neal was the logical next choice with ‘The Black Mamba’ more than likely to follow.

“Here’s a guy who played with a lot of force, a guy who wanted the crowd to go crazy,” O’Neal reporters after the ceremony, when asked to describe what the statue represents to him. “There’s two things that made a crowd go crazy: a deep, contested three and a dunk. I always tried to dunk to intimidate my opponents and to make the crowd go crazy.”

The crowd most definitely went crazy for Shaq and now he will be immortalized at the Staples Centre forever.