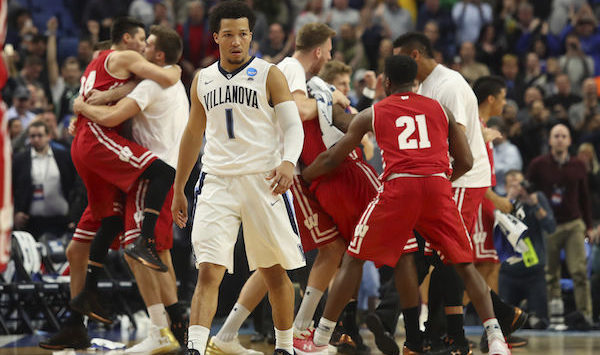 Nova Ousted in Wild Start to Round of 32, Xavier Roll on

After a round that went a little too smoothly, all hell has begun to break loose.

The defending champion Villanova Wildcats were the first no.1 seed to be eliminated from the NCAA Tournament. With a Michael Jordan-type move, Wisconsin big man Nigel Hayes got by his defender and finished at the rim, breaking the deadlock and hitting the game-deciding basket.

Led by guard Josh Hart, Nova was unable to tie the game up, being denied on the other end as the veteran-led Wisconsin Badgers team has yet again punched its ticket to the Sweet Sixteen.

Speaking of punching its ticket to the Sweet Sixteen, the Cinderella story continues for the no. 11 seeded Xavier team, who after beating Maryland in the Round of 64 has taken down the three-seeded Florida State Seminoles. A team led by one the the nation’s top prospects, Jonathan Isaac, the Seminoles were dismantled by a score of 91-66. This will be Xavier’s sixth Sweet 16 appearance over the past decade.

Other news from March Madness, the number one seed Gonzaga Bulldogs held off a fierce Northwestern comeback and with the help of a very controversial play, advanced to the next round.

Purdue, led by Caleb Swanigan halted a fierce Iowa State comeback and the best of the Pac-12, the Arizona Wildcats were able to take down a very underrated St. Mary’s team.

Tomorrow should be another interesting day in college basketball as the tournament favourite Duke Blue Devils continue their run to the top and the Canadian-led Oregon Ducks take on a scorching hot Rhode Island team.